The Kuala Lumpur High Court will decide on Feb 13 on an application by blogger Raja Petra Kamaruddin to remit his criminal defamation case to the magistrate's court where he was originally charged. 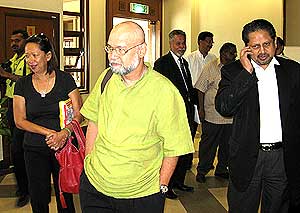 Judicial Commissioner Zainal Aznam Ab Aziz's decision will determine if the case stays at the Sessions Court as sought by the prosecution, sent back to the magistrate's court as requested by Raja Petra or pushed to the Federal Court for a ruling on a constitutional matter.

The application before the High Court was based on an objection against the prosecution's application to hear the matter in the Sessions Court.

The questions raised included a constitutional issue with regard to equality in relation to the possible difference in quantum of fine to be imposed on Raja Petra if he were to be found guilty by the Sessions Court, compared to the Magistrate's Court. 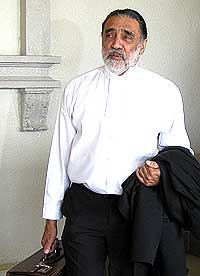 Raja Petra's lead counsel Manjeet Singh Dillon today reiterated that the transfer of the case to the Sessions Court is "illegal, void and contrary" to Section177 of the Criminal Procedure Code (CPC) and in breach of Article 8 of the Constitution relating to equality before the law.

He also argued that there is no basis for the attorney-general (AG) to argue the "involvement of public interest" as the basis for the transfer from the Magistrate's Court to the Sessions Court.

DPP Anselm Charles Fernandes, who represented the prosecution, rebutted by stating that Section 177 of the CPC as well as Article 145(3A) of the constitution provide for the transfer.

Equality before the law as provided by Article 8 "is not absolute", he argued, but is qualified by Article 145(3A) that provides for the AG to decide the forum or venue of a case to be prosecuted.

Manjit, however, countered that what is in question is not so much whether Section 177 allows the AG to decide the venue of a prosecution, but whether such transfer of a case to a higher court exposes his client to harsher punishment.

"By taking the applicant to the Sessions Court, he will be exposed to harsher punishment," said Manjit.

Raja Petra, 58, the editor of the Malaysia Today portal had on Nov 24 claimed trial to three charges of criminal defamation in the Sessions Court.

He was initially charged on July 17 in the Magistrate's Court with three counts of criminal defamation against Rosmah Mansor, acting Colonel Aziz Buyong and Colonel Norhayati Hassan through a statutory declaration.

Raja Petra is alleged to have committed the offences at the High Court Civil 5 in the Jalan Duta court complex at 10.25am on June 18. He faces a maximum two-year jail term or a fine or both, if convicted.

In his statutory declaration, Raja Petra implicated Rosmah, who is wife of Deputy Prime Minister Najib Abdul Razak, and the other two in the murder of Mongolian national Altantuya Shaariibuu.

However, on Aug 15, magistrate Nazran Mohd Sham decided to transfer the case to the Sessions Court following an application by Anselm.

Sessions judge Mohamad Sekeri Mamat had on Nov 28 ruled he would not be making any decision on the preliminary objection and the notice of motion as it had been referred to the High Court.

In addition to the case, Raja Petra faces a sedition charge in the Petaling Jaya Sessions Court.

He further faces two civil suits, one by top lawyer Muhammad Shafee Abdullah and another by the army couple over his postings on the Malaysia Today blogsite.

Shafee's civil suit will be heard on Feb 23, for an inter-parte hearing after High Court judge Tee Ah Sing granted an ex-parte injunction against the blogger on Aug 13.