Sabah's population has exploded by five fold since 1970, according to malaysiakini's stunning news item recently. In its news report titled Sabah facing an Epic problem , correspondent Tony Thien stated that the state's population has grown from 0.65 million in 1970 to 2.99 million in 2004 with Sabah NGO leaders estimating that out of the three million population, two million are illegal immigrants, many of them enjoying bumiputera privileges.

In making this estimate, consideration was given to the fact that 800,000 Sabahan Malaysians left the State from 1995 to 2004 according to immigration records. Sabah leaders, however, are now petitioning for a royal commission of enquiry which should, among others, "investigate into why so many ICs were issued, who authorized it and under what law".

While the phenomenon of Sabah's population explosion arising from the influx of illegal immigrants has been common knowledge, I find it strange that people should be asking the hows and whys shouldn't these also have been common knowledge? Have we forgotten Justice Muhammad Kamil Awang's judgment annulling the Likas election in Sabah in June 2001?

In a rare display of judicial independence under former prime minister Dr Mahathir Mohamad's rule, Justice Muhammad in his judgment chronicled details of a massive illicit campaign to convert illegal immigrants into voters through the unlawful issue of blue ICs and the unlawful registration of these IC holders into the electoral rolls. These details of illegal activities included many instances of witnesses' testimonies, affidavits and incriminating government and political party correspondence and circulars.

These evidences point irrevocably to the involvement of the National Registration Department, the Election Commission, police and Umno officials in a joint conspiracy to massively convert illegal Philippine and Indonesian immigrants into citizens and voters. In fact, this voter scam was so serious that it was described by Muhammad as only the "tip of an iceberg".

Muhammad's judgment also gave details of how repeated official complaints from the opposition parties on such fraudulent practices had been consistently stonewalled by the authorities all the way up to the highest levels of government, including a rejection for debate in Parliament.

In June 2001, I wrote an article titled 'In defence of Justice Muhammad and judicial integrity', countering the concerted attacks by Mahathir and former de facto law minister Rais Yatim against Justice Muhammad. In an obvious attempt to cover up ruling BN's wrong-doing, Mahathir and Rais accused Muhammad of using the judgment to vent personal grudges against the government through "politicking and anti-administration comments".

In my article, apart from exposing the falsehood of Mahathir's and Rais's accusations, I dwelled at length at the motivation behind this illicit campaign to turn illegal immigrants into citizens, and also at the fatal impact such devastating demographic changes in Sabah society had on the original Sabahans. I also outlined remedial steps that should be taken to undo these damages.

These comments were as relevant then as they are now. Since the issue has now caught national attention, I would append relevant extracts of that article as input towards resolution of this current mess, which is obviously of crisis proportions to Sabahans now. 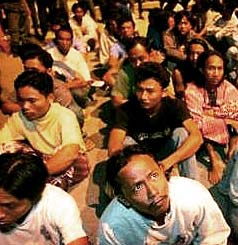 After stating in the article that the highest authorities in the National Registration Department and the Election Commission in Kuala Lumpur had been incriminated in this phantom voters scam. I wrote then:

'What motivated these highest civil servants to commit such treasonous acts against the Sabah state in unlawfully admitting these tens of thousands of illegal immigrants as citizens and voters? Personal gains can be ruled out, as these are more than offset by the heavy punishment that can be meted out for such high crimes against the country.

"The only plausible explanation is that this is the political strategy of the Umno leadership to regain political power in Sabah from the Kadazan (mainly Christian) dominated PBS. The latter has won every Sabah election since 1986 save the last one in 1999. It does not take a genius to find out why. Until the last election in 1999, the Sabah electorate had been such that non-Muslim Kadazans and Chinese overwhelmingly outnumbered Malays (all Muslims) and other Muslims.

'And this is exactly what happened. Through the massive infusion of illegal Philippine and Indonesian immigrants (who are all Muslims) into the electoral roll and gerrymandering, Muslim majority constituencies in Sabah in the 1999 electoral roll had suddenly and inexplicably increased from 30% to 50% of the total constituencies of 48 within a short period of five years. Given this numerical boost, Barisan Nasional swept the last Sabah election in 1999, after employing every dirty election trick available under the sun including the usual blatant abuses of government agencies and resources and the mass media which was completely under the thumb of the ruling coalition.

'Now that Justice Muhammad has established legitimacy to past complaints of serious electoral frauds that have hitherto been rejected by the election courts and denied by the government, we must pursue relentlessly to clean up this mess and restore justice to the people of Sabah. An independent commission of enquiry should be set up immediately with the following objectives:

i) On illegal issue of blue Ics: 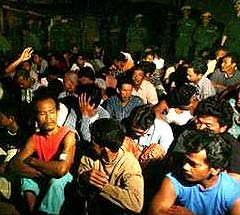 Looking back historically, this illegal immigrant nightmare in Sabah started in the early seventies when the late chief minister Mustapha Harun (an ethnic Suluk born in Philippines) opened the floodgate for the Southern Filipinos (mainly Suluks) to swarm onto the shores of Sabah.

Since then, the unrestrained inflow of illegal immigrants from both Philippine and Indonesia over the decades resulted in these immigrant societies growing to monstrous proportions.

These immigrants have been not only been posing grave security threats to the outnumbered Sabahans, but have now taken centerstage as phantom voters to dislodge the indigenous population from their legitimate seat of power.

Through such betrayal of Sabahans' trust in the Barisan Nasional federal government, Sabah's security has been endangered and Sabahans' constitutional rights of self-determination stripped. Is it not right and proper that a royal commission of inquiry be set up now to ascertain the true facts and strategise on remedial measures?

Must Sabahans continue to suffer silently? When will they rise up to be the masters of their own fate?

KIM QUEK is a retired accountant