The recent announcement that the Sarawak government intends to build 12 more dams in Sarawak apart from the ill-fated Bakun dam is cause for concern.

It is a cause for grave concern. Malaysian tax payers, Malaysian forests and Malaysian indigenous people will again be the main victims of this misconceived plan.

The stop starting since the damned project was first proposed in the seventies, the proposal and abandonment of the aluminium smelter, the upsizing and downsizing of the dam, the inclusion or exclusion of the undersea cable project are all symptomatic of a wanton disregard for planning. Let me remind Malaysians of the ludicrous inconsistencies of official policy on this damned project.

In 1980, the Bakun dam was proposed with a power generating capacity of 2400MW even though the projected energy needs for the whole of Sarawak was only 200MW in 1990. 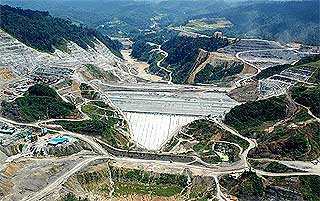 The project was thus coupled with the proposal to build the world’s longest (650km) undersea cable to transmit electricity to the peninsula. An aluminium smelter at Bintulu was also proposed to take up the surplus energy.

In 1986, the project was abandoned because of the economic recession although then Prime Minister, Dr Mahathir Mohamad announced just before the UN Conference on Environment & Development in Rio that this was "proof of Malaysia’s commitment to the environment".

In 1993, with the upturn in the Malaysian economy, the government once again announced the revival of the Bakun hydro-electric plant project.

To cushion the expected protests, the then Energy Minister S Samy Vellu gave Parliament a poetic description of a "series of cascading dams" and not one large dam as had been originally proposed.

Before long, it was announced that the Bakun dam would be a massive 205-metre high concrete face rockfill dam, one of the highest dams of its kind in the world and it would flood an area the size of Singapore Island.

The undersea cable was again part of the project. There was also a plan for an aluminium plant, a pulp and paper plant, the world’s biggest steel plant and a high-tension and high-voltage wire industry.

Then in 1997, with the onset of the Asian financial crisis, the Bakun project was put on hold for the second time. But the scandal was, while the anthropologists in all Malaysian universities were sound asleep, the government proceeded to remove 10,000 indigenous people made up of fifteen different ethnic groups from their ancestral lands.

All this happened while the project was on hold and Malaysians shouted "Malaysia Boleh !"

In 1999, after the economy had recovered, the government again announced that the project would be resumed, albeit on a smaller scale of 500MW capacity.

Before long in 2001, the 2400MW scale was once again proposed although the submarine cable had been shelved. Today, we read reports about the government and companies still contemplating this hare-brained scheme which is now estimated to cost a whopping RM21 billion!

Not only that, we now hear that 12 more hydroelectric dams will be generating a total capacity of 7000MW by 2020 – an increase of 600 percent from its current capacity!

Ultimately it will be the Malaysian consumers who pay for this expensive figment of the chief minister’s wild imagination. Enough tax payers’ money has been wasted - Sarawak Hidro has already spent some RM1.5 billion on the project.

The human cost has been immeasurable - 10,000 indigenous people have been removed from their ancestral lands in 1998 even while the project had been shelved.

If the prime minister really wants to know the state of the Malaysian energy industry, he should ask for independent audits on every power station in the country. These should preferably be done by reputable international audit authorities from outside Malaysia.

We are told that TNB is now selling off property, power stations are not working at full capacity and that the electricity industry is hugely indebted.

Right now, the country is being fed conflicting reports about energy demand. There is supposed to be a 43 percent oversupply of electricity capacity in peninsula Malaysia.

Experienced Bakun dam watchers will tell you such conflicting and mutually contradictory assertions have been used by dam proponents to justify every flip flop of this misconceived project.

Apart from the economic cost and the wastage, how are investors supposed to plan for the long-term and medium term? What is the long-term plan for Bakun? Can Bakun compete with the rest of the world or for that matter, Indonesia?

Aluminium smelters to take up the bulk of Bakun electricity have been mentioned ever since the conception of the Bakun dam project because they are such voracious consumers of energy.

Even so, has there ever been any proper assessment of the market viability of such a project with the cheaper operating costs in China?

Does it matter that the co-owner of one of the smelters is none other than Cahaya Mata Sarawak (CMS) Bhd Group that is controlled by Chief Minister Taib Mahmud’s family business interest?

Clearly, Bakun energy and Sarawak’s tin pot governance do not inspire confidence in investors. First it was Alcoa, and then Rio Tinto also had second thoughts about investing in Sarawak.

Concerned NGOs have all along called for the abandonment of this monstrous Bakun dam project because it is economically ill-conceived, socially disruptive and environmentally disastrous.

The environmental destruction is evident many miles downstream since the whole Bakun area has been logged by those who have already been paid by Sarawak Hidro.

The social atrophy among the 10,000 displaced indigenous people at the Sungei Asap resettlement scheme remains the wicked testimony of the Mahathir-Taib era. The empty promises and damned lives of the displaced people as forewarned by the concerned NGOs in 1999 have now been played out.

The economic viability of the Bakun dam project has been in doubt from the beginning and the new scheme to build 12 more dams merely represents multiple follies and a scandalous flaw in planning.