A rare exhibition of genies, ghosts and coffins is drawing huge crowds of Malaysians keen to catch a glimpse of the supernatural world, despite criticism that the spectacle is "un-Islamic".

Heart pounding and sweat beading on his forehead, businessman Ahmad Abdullah walked away from one spooky exhibit visibly shaken after being convinced he saw a spirit hovering above a once-used coffin and tombstone.

"This is my third visit," said Ahmad, who came to the Sultan Alam Shah museum to see mythical creatures including a "mermaid" supposedly captured in neighbouring Indonesia. "And I saw a white spirit in the dark enclosure."

The 30-year-old said the spirit, or "pochong" in the Malay language, appeared as a flimsy, white form in a glass room fitted with a coffin and a replica of a corpse that curators had created to lure the spirit to this world. 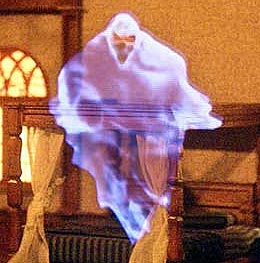 Museum chairperson Amzah Umar said some 100 items were on display to the public for the first time.

Amzah said that in the past, the imp-like, malevolent creatures were used to steal money and other valuable items and also to cause deadly harm.

"The ghosts are now locked away and will not be able to harm anybody," he said, adding that when they were brought in, some of the mythical creatures exhibited gave off the smell of rotting flesh.

A major attraction at the exhibition is a metre-long (three-feet) mummified mermaid with dark hair, jutting teeth, scales on its brown body and the tail of a fish.

Another unnerving item on display is a "langsuir", Malaysia's version of a vampire, with a shock of coarse hair and a mouthful of jutting teeth. It is said here that a woman who dies in childbirth will turn into such a creature.

And a creepy half-woman, half-snake spirit known as a "nyai blorong" looks ready to leap from its shelf, creeping along on clawed bird-like hands, with a bony face and a lipless line of razor-sharp teeth.

Black magic used to be common in rural Malaysia, bred on myths and superstitions. It was used to gain power and wealth, and to harm enemies.

The practice reached its height during the sultanate days of the 16th century, but faded away as the influence of Islam grew in this multicultural nation.

But the lingering fascination with the supernatural has helped draw huge crowds to the exhibition which closes later this month. Authorities say some 300,000 people have visited since it opened in July.

Islamic scholar Safuan Abu Bakar, who owns many of the exhibits, insisted that they are real and just "another creation of god".

"It is not aimed at changing the values of the people. It is just about sharing and seeking knowledge. You need to have a strong will. There is no need to be afraid that anyone will lose their faith in god," he said.

"I am a religious teacher. It is my hobby to collect these paranormal items. It will help to instill strong spiritual feelings."

Critics however say the exhibition should never have been held as it goes against the tenets of Islam.

"It does not add to knowledge. It is against Islam," he said.

Echoing similar sentiments, Malaysia's culture, arts and heritage minister Rais Yatim said the government does not encourage exhibitions related to ghosts and spirits because there is no proof of their existence.