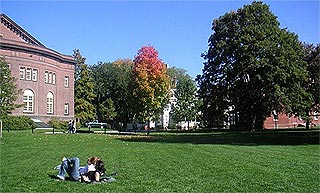 I chose the latter.

New England conjures up an image of old elite institutions set in picturesque fall and gloomy winter. The colourful fall foliage on my campus could also be the postcard-perfect portrayal of a typical New England college - but underneath the faade of the breathtaking spectacle, my school is far from being typical. Half the world's population is forbidden from attending this women's college.

If you think a women's college is just a spin-off from your all-girl convent schools, you are wrong. I attended a convent school previously where before the Lord's Prayer , we recited the school pledge that reminded us to be demure daughters and sisters every day. It certainly felt like being trained to be good wives.

Although the sight of elegant women taking brisk walks along the river or picnicking on the lawn would be lovely, they are already on the brink of extinction.

Now, we are indiscriminately labeled feminists - a.k.a. angry, men-hating women - just by the virtue of our enrolment at the school which graduated some of the most influential liberal feminists in the US like Betty Friedan and Gloria Steinem. 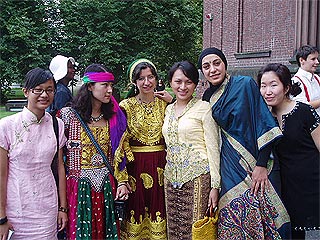 Such a development baffled some alumnae who attended the school when it was exclusively for women in pastel-colored twinset cardigans and pearls and heels. However, tracing the history of the school, I found it not unnatural that the school took this course since its establishment more than a century ago.

The founding purpose of the college was to provide the best possible college education for women during a time when most leading universities only admitted men. The original idea may seem irrelevant today after all of these universities started admitting women by the 1970s but fundamentally, the school is still carrying the legacy of promoting the rights of the disadvantaged of all social classes, ethnicity, religions and sexual orientations.

A legacy of activists

To me, my school is not merely an educational institution, but also a counter-cultural entity that challenges social norms and accepts people whom the society might regard as 'different'. I just liked how the tolerant atmosphere encouraged us all to be ourselves.

Well, it is not that there are no restrictions to how we can be ourselves. The requirement is still to be politically correct and sensitive to others.

In 2003, in one of the most revolutionary changes in the school's history, the senate of Student Government Association and the student body voted for the replacement of the pronoun "she" in its constitution by gender-neutral language, such as "student" to acknowledge the transgender community on campus. After being brainwashed with political correctness, I got jitters when I hear my counterparts from other schools calling their first-year students "freshmen" as my school had long rejected the sexist term.

Gender-based activism may be the biggest thing on campus but students also feel they need to treat all the injustices in the world through a plethora of activism.

We did not run out to protest just because we did not want to stay in our classrooms. We did manage to get things changed. Among other consequences of our active lobbying, the school prohibited investment in companies (some of which were Malaysian) which supported the government of Sudan. Recently, I mourned the demise of my favourite drink, the ubiquitous Coca-Cola , when the college's president decided to ban the corporation from participating in a soft drink bidding process due to their unethical business practices in Colombia and India. 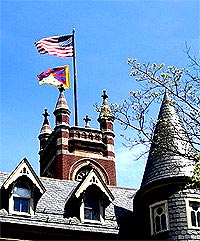 Other social and political action groups include the less popular campus Republicans who faced strong opposition when they wanted to bring in a 'radical conservative' to speak at the school, a support group for queer students of colour and an active student group part of an international coalition campaigning for Tibet's independence.

We just never seemed to be short of a cause to embrace - from the pettiest to the most serious. Somehow, the widespread activism on campus also suggested the creativity of my overly passionate fellow students who can effortlessly come up with one 'tree to hug' after another. Way before I arrived on campus, I knew I had to prepare myself for the most outlandish and unpredictable behaviours.

I got a taste of the eccentricity on campus early into my arrival there. A particularly eye-opening yearly tradition was the convocation a day before the school year began, a campus-wide event attended by both the faculty and student body. Although houses had varying themes to dress up in, from super heroes to pirates, there seemed to be an implied underlying rule to what everyone's costume should be like - the most revealing to the point of nudity - probably to facilitate their after-parties, at which they would skinny-dip in the pond and river. Ultimately, Saran wrap and paint were the preferred materials for our costumes.

After a while, even the most outrageous became commonplace. Nothing was too deserving of a second look - nothing was unusual anymore - not the campus pagans who walked around with lanterns in their hands and chants on their lips, or the woman who wore a Halloween-costume-like cape every day who would take stops during her solitary stroll around campus to have monologues with squirrels. I was already numb. 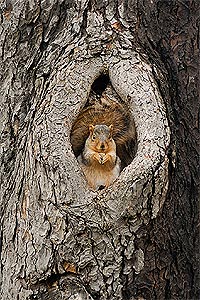 Yes, squirrels and chipmunks - I had a one-time fascination with them. I think it started when I walked past a tree and noticed the incredible congruence between the acorn in a squirrel's paws, the squirrel's body, the squirrel's tail and the opening of its nest.

In the first few weeks of school, I walked the school campus scrutinising every single tree to test my luck for another similar sighting. It did not happen again and before I knew it, the trees started shedding their leaves and turned bare overnight. And the leaves took the squirrels with them.

There was no white Christmas last year. Thanks to Al Gore's An Inconvenient Truth and the snow that came late, almost every one became an environmentalist. The Birkenstock-wearing and granola-crunching hippies emerged, voluntarily distributing free energy-saving bulbs to save the polar bears 2000 miles away. That winter also saw the already deep hatred towards the delusional Bush administration, which refused to ratify the Kyoto Protocol, intensify. As a result, the campus Democrats gained a wider fan base and more support for Barack Obama's presidential nomination campaign. 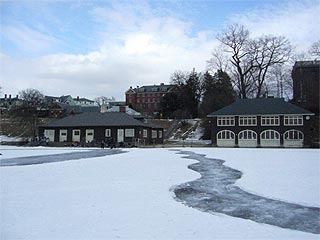 Making snowmen and skating on the frozen pond were perfect substitutes for the lack of retail therapy in the small town, where the retailers seemed to be only concerned with selling rainbow gear. But my verdict was winter was not exactly the friendliest season. The seemingly perpetual cold and darkness disrupted my pilgrimages to the Asian restaurants downtown for winter-day craving for tongue-burning and tear-inducing Korean kimchi jjigae or extra-spicy Thai green curry on a few occasions.

The school always boasts its unique residential culture in which the majority of the students live in on-campus houses (as opposed to dorms) - a practice to increase the camaraderie among students. The landscape of the campus would probably not be as scenic if not for the 36 houses of various sizes and architectures that are scattered all over campus. 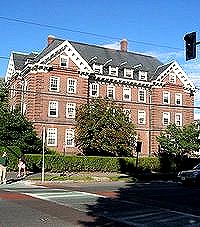 My house was a nice 1911 brick and ivy-covered building conveniently located near the only academic buildings I could be bothered with. Its strategic location (and the absence of the opposite sex) meant that I could wake up just a few minutes before classes and put on an outerwear over my pajamas to rush to my first class.

Stories (both real and fabricated) about houses also made for good conversation topics during those all-nighter reading period of procrastination before final exams, when caffeine suddenly became free-flow and free snacks would mysteriously appear in every corner of the house.

In my first year, the upper class students in my house helped us unwind from pre- and post-exam stress by mesmerizing (or scaring) us newcomers with trivia like the staircase in a particular house which Margaret Mitchell used as an inspiration for the one in Tara in Gone with the Wind or the ghost of a heartbroken woman who was separated from her lover centuries ago, in another house.

Nevertheless, my closest witness to a paranormal phenomenon was when the ice machine in one dining hall dispensed ice by itself.

In "SUPER-SIZED" America, gatherings just got more meaningful where there was food. Every week, I looked forward to the Thursday candlelight dinner and Friday house tea that served the usual suspects - wine, cheese, cookies, chocolate and all the sinful indulgences. Dinner conversations took a few forms but the kind that dominated was the one where everyone went in a round robin sharing how they wanted to use their college education to change the world and make it a better place. (No, we don't talk about boys) Again, we are idealistic women living in our own bubble. Grow up and face the real world, you say?

And finally, I am here to gain knowledge

No, four years in college isn't enough for all the ideals we want to pursue. If my parents are reading this, they would probably be infuriated by how I have not talked about my studies.

Isn't it funny my academic life seems like an afterthought, like studying isn't the most important thing to do at college. This deliberate move on my part is actually to reiterate my point that the role of a student in America encompasses a plethora of duties.

Anyway, for the record, I go to a liberal arts college where people have an incomprehensible infatuation with all things artsy fartsy. Yeah right!

I am already tired of addressing people's misconceptions (and reservations) about attending a school like mine. They asked the questions "Why a college (as opposed to a university)?", "Can you get a bachelor's degree there?", "Huh? Why do you suddenly want to do arts?"

What exactly do I want to major in at my liberal arts college then? HmmEconomics? Biochemistry? Mathematics? Art History? East Asian Studies? Engineering? I am not sure - not just yet, mind you. My school is too flexible.

Like any other Asian parents, my parents had wanted me to do a professional program - law, engineering, medicine - whatever it would take to give me a decent job in the future, and perhaps to give them a sense of gratification for having a 'successful' daughter. I should be prepared enough to enter the job market upon graduation, lest you think that with what I am doing now, I am just another prodigal daughter wasting her parents' money on an overpriced college education that gives her nothing.

Well, if you are still more concerned with the ends than the means, I am pretty sure I can get a job in the future - even beyond the journalism industry.

SU HUI HSING, now on a summer break from Smith College, Massachusetts, is on a two-month internship at Malaysiakini.