MALAYSIA's Malay leaders say 'do as I say, not do as I do' when it comes to marriage 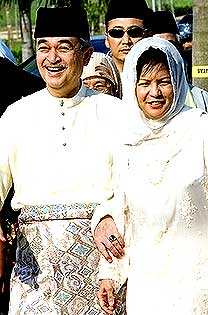 This low-key but high-profile wedding followed another elite ceremony in May when one of Malaysia's most eligible bachelors, the Raja Muda (crown prince) of Perak, Dr Raja Nazrin Shah, finally got hitched at the age of 50 in an unostentatious ceremony in Kuala Kangsar.

But these two weddings had something else in common, a characteristic not much commented on in the media but clear to most Malaysians: in both cases the brides were locally-born Eurasians.

The prime minister's new wife is Jeanne Abdullah, a friend and relative of Abdullah Badawi's late wife, Endon, who died of complications from breast cancer in October 2005. Jeanne had originally been Jean Danker, a Catholic from a Eurasian family which spans Malaysia and Singapore and who converted to Islam when she married her first husband, Endon's brother Othman, from whom she was later divorced.

The bride of Oxford and Harvard-educated Raja Nazrin, son of the current Perak Sultan, who himself was formerly Malaysia's top law official, is Zara Salim Davidson, a chemical engineer and the daughter of William Davidson, a British-born Ipoh lawyer and his Malay wife. She herself is a member of the Kedah royal house and thus related to Malaysia's first prime minister, Tunku Abdul Rahman. Raja Nazrin has repeatedly spoken out against racism in Malaysia. Zara considers herself to be very much a Malay despite her Eurasian blood. 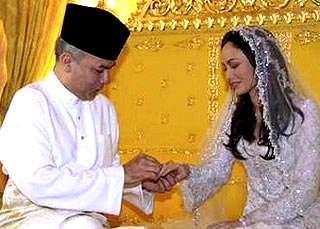 These weddings thus represent what should be one of the triumphs of Malaysia - its ability to break down racial and religious barriers and subsume them into a broader Malaysian identity. Unfortunately the elite all too often fails to preach what it actually practices. It is a one-way street. Marry a Malay and you will become a Malay. You will also become a Muslim and, the courts say, you will stay that way.

The good-natured Abdullah Badawi clearly has no problem with the mixed racial ancestry of his bride, or with the fact that she was baptised a Christian. Yet he heads a ruling party which is not merely race-based but at times makes a fetish of Malay racial purity. And he heads a government that supports the recent court decision refusing to allow a Muslim to become a Christian, an act of supposed apostasy. But in the eyes of some Christian fundamentalists, the gentle Jeanne is also an apostate for having forsaken Christianity.

Others have identity problems too

Malays are not the only ones with identity problems. Scratch many a Malaysian Chinese and one may also find a strain of Chinese chauvinism, as is often the case in Singapore. But in Malaysia it is the Malay elite which sets the tone. This is why many believe that a more open recognition of the sheer diversity of Malaysians' origins would help offset the divisions caused by race-based politics that identifies religion with race. 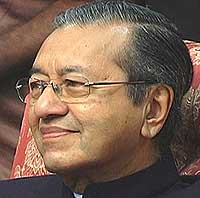 Just a brief look at the origins of many members of the elite gives the lie to ethnic purity and religious dogmatism. There is Mahathir Mohamad, Malaysia's longest-serving prime minister. His father was a Muslim Malayali from Kerala in south India who migrated to Malaysia and took a Malay bride. Mahathir himself was classified as an Indian when at university in Singapore.

But instead of celebrating the upward mobility that Malaysia offered to this migrant from India, the politics of the United Malays National Organisation (Umno) required Mahathir to bury his ethnic past and wear his acquired Malay identity on his sleeve. In reality Mahathir welcomes racial mingling. His son Mirzan married into the family of Indonesian Chinese tycoon Liem Sioe Liong, and daughter Marina's first husband was European.

The current head of Umno Youth, Hishamuddin Hussein, who waved a kris (Malay dagger) at last year's national Umno convention and offered to bathe it in Chinese blood to the ominous cheers of the audience, is another whose Malay roots are not as deep as often assumed. His grandfather, the founder of Umno, Onn Jaafar, appeared to be a Caucasian, which was not surprising given that his Johor-based family was of Turkish origin. Onn was ejected from the party he founded because he wanted to make it multi-racial and though his son went on to become the head of Umno and a prime minister, he carried with him his father's inclusive and moderate instincts.

Onn lost out politically to Malaysia' s first Prime Minister, Tunku Abdul Rahman. Although the Tunku placed more emphasis on Malay identity, he was certainly no exclusivist. Indeed, he had been born a subject of the King of Siam and as a scion of the royal house of Kedah spent some of his early years in Bangkok at the court of his then sovereign. His mother was Siamese, though her family originally was from Pegu (Burma). Of his four wives, one was Thai Chinese, one English, one Malay and one Malaysian-Chinese. He never hid his fondness for whisky, even while heading the Organization of Islamic Conference, or his student days in England pre-occupied, as he once put it, with "fast women, fast cars and not-so-fast horses." 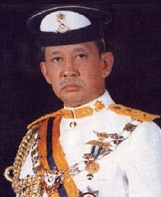 The Malay aristocracy has anyway been quite catholic in its choice of brides. Those in mixed marriages include Ahmad Shah, the Sultan of Pahang, whose consort is of Pakistani lineage. The Sultan of Selangor's divorced second consort and mother of his heir apparent was an American citizen.

Sultan Iskandar of Johor's first wife, the mother of his heir apparent, was a British woman, Josephine Trevorrow. In this respect Sultan Iskandar took after his own grandfather, Sultan Ibrahim, who had two European wives, one British, one Romanian.

Maybe it is Johor's geography, its proximity to Singapore and the diversity of Indonesia, but its politicians seem to thrive on marrying outsiders. Former Deputy Prime Minister Musa Hitam's first wife was from (Catholic) Latin America and his second was of mixed ancestry. Another Johor politician, Tun Dr Ismail, deputy prime minister in the early 1970s, was of part Chinese ancestry.

Conversions of convenience to Islam often mean that Malay mixtures leave little trace compared with other cross-ethnic marriages. But the non-Malay, but Muslim, origins of many of the elite are found everywhere, from South Asia, Yemen, Egypt, Turkey and other countries. They include the likes of Zeti Aziz, the governor of Bank Negara. She is the daughter of Ungku Aziz, the European-looking former University of Malaya vice-chancellor, whose Johor-based family came from Turkey.

Chinese roots are also more real than apparent, often hidden by conversions. But relatively recent high-profile marriages to Chinese include Tengku Razaleigh, former finance minister and a member of the Kelantan royal house who married a long-time Chinese friend who converted and changed her name to Noor Abdullah.

Rashid Hussein, the prominent Singapore-born, Anglophile financier whose father was Indian and mother Malay married Sue Kuok, a daughter of tycoon Robert Kuok Hock Nian, the Malaysian-born but now Hong Kong-based tycoon. Kuok's first wife and mother of some of his children was Eurasian but he later married a Chinese and emphasized his Chinese ethnic identity. In a recent book, "Asian Godfathers" Kuok was described by an in-law as "the biggest racial bigot I have ever met."

Among the non-Malay groups, inter-ethnic marriages are generally much more common than among Malays. However it also seems the case that migration is the preferred option for the numbers of Malaysians who either marry across ethnic lines or acquire foreign spouses while studying or working abroad. This particularly applies to Malay women who are either not particularly religious or who see no reason why their spouses should convert.

By one estimate, there are some 150,000 mixed marriages in Malaysia, a number that seems impossibly small in a population of 24 million. The leafy, winding streets of Damansara Heights and Kenny Hills abound with matrons who entered into marriage and lives of leisure with well-to-do Malays straight out of the universities of England, where the government had sent their mates. It is forbidden for a Muslim to marry a non-Muslim, so these women, with their servants and their huge homes, stop being Jean and become Jehan in public, although seldom in private.

But while the list of Malay elites is long and rich with instances of intermarriage, at the lower economic levels the list is short, and increasingly circumscribed by the growing power of Malaysia's shariah, or Islamic religious courts. The issue was brought to the fore in the case of Lina Joy, who changed her name from Azlina Jailani and became a Catholic in an effort to marry a non-Muslim.

Not a catalyst but symbolic

With scores, perhaps hundreds, of outraged Muslims outside the courtroom, demanding that she be denied the chance to change her religion on her identity card, a high court ruled in May that she was subject to the jurisdiction of the shariah court. The shariah courts have allowed one conversion in history for a woman who had been dead for decades.

The result is that either people do not marry, or they emigrate. Bright women who have preferred to marry foreigners found their husbands denied work permits. There are believed to be thousands living in Australia, Canada or the United Kingdom.

For Malaysia's young to take their cues from Malaysia's top politicians and the cream of society outside of official policy might not be a bad idea. Shamsul Amri Baharuddin, the Director of the Institute of the Malay World Civilisation (ATMA) and Professor at University Kebangsaan Malaysia (UKM) in Bangi and himself married to an Australian, says Abdullah Badawi's marriage to Jean Danker Abdullah is "not a catalyst but certainly symbolic."

Marina Mahathir told Asia Sentinel that "If people think that marrying into another culture is enriching, then it will be a good thing. But some people make one person give up their own culture because they think of it as inferior."

But so long as the elite indulges in kris -waving while marrying as it pleases, multiracial nation-building may have scant grassroots impact.