While the Sarawak campaign may lack dynamism, the nature of the state’s politics has been transforming. Over the last 10 years, voting has changed considerably, with more support for alternatives and, importantly, greater engagement in politics.

Chief Minister Adenan Satem and his team, led by the head of the BN Prime Minister Najib Abdul Razak, aim to stop and reverse these gains, and in the process assure that the state remains a BN stronghold. By looking at voting behaviour, we can understand the electoral battlegrounds and the slowly-shifting sands of the Sarawak political landscape. 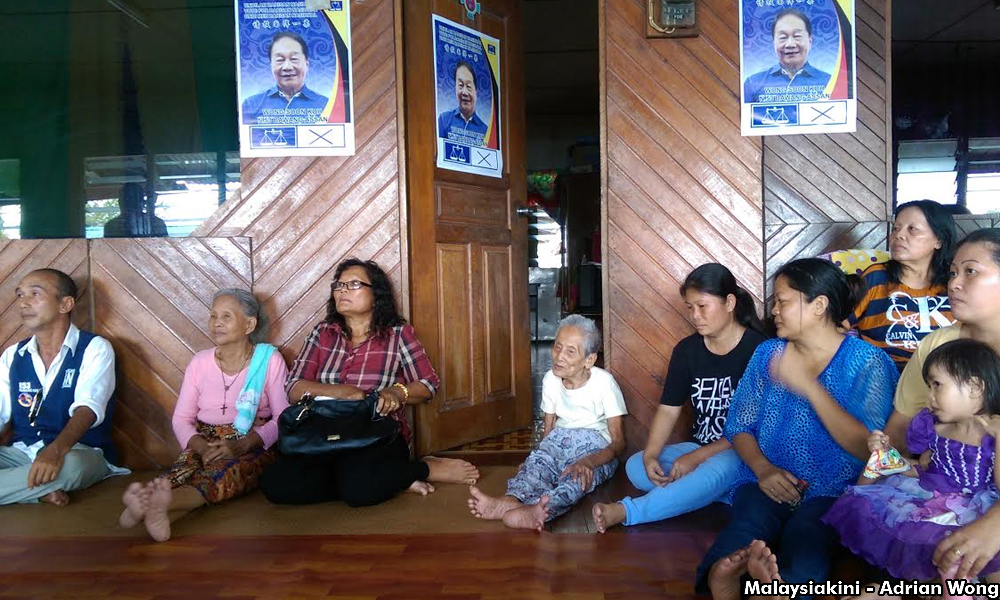 I have studied voting trends in the past two elections; the state election of 2011 and parliamentary election of 2013 (GE 2013). The findings on voting in those studies are estimates based on polling station results and assessments, a study of voting at the smallest unit of analysis available using a methodology that has become common in understanding voting behaviour, known as ecological inference.

The findings reveal important differences among the Sarawak electorate, and show the type of constituencies and communities that are the most contested. Rather than simplistically and mistakenly boiling down the election to ‘Adenan,’ it is necessary to better appreciate the diversity of Sarawakians and the variation in their political engagement.

Sarawak is Malaysia’s most rural state, with many remote areas and the country’s worst transportation infrastructure. It is also the state with the most rural constituencies.

Of the 82 seats, 30 of these can be seen as rural (36 percent), another 38 as semi-rural (46 percent) and 14 of these are urban (17 percent). The share of semi-rural seats has been increasing with the expansion of infrastructure and development. Within many of these seats there are more and less urbanised areas, requiring analysis to focus on polling stations that reflect the specific towns, villages and long houses.

The BN maintains a clear advantage in rural areas, where it wins close to an estimated two-thirds of the support. By contrast, the BN has only won slightly over a third of the support in the urban areas in recent polls.

In this election, both sides are heavily fighting to break the urban-rural patterns of voting. The opposition is facing an uphill battle. PKR’s long-standing support for land rights and DAP’s more recent Impian efforts underscore their attempts to win rural support. With recent improvements surrounding native customary rights (NCR) to land and promises to stop dam construction, rural issues are less heated than in the past, making the opposition campaign even more challenging. 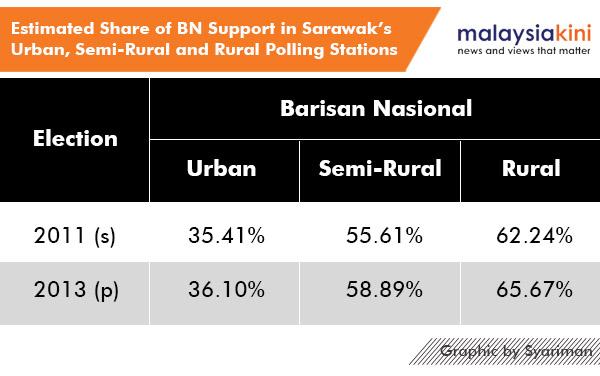 Many rural folk, however, have yet to receive promised compensation and continue to face serious conditions of poverty and poor infrastructure. They also question the sincerity of promises. Furthermore, discrimination remains a problem for many marginalised communities. Rural folk are more aware of issues than in the past, as information technology has improved.

In this election, almost all of the political parties have stood local candidates in rural communities and have worked the ground for some time in most of the seats. The breakthrough for the opposition in rural areas happened in 2011 in Ba’kelalan and Krian where PKR candidates won. The rural areas are becoming more competitive, although in these polls arguably less than a third of the rural seats are seen as meaningfully competitive. Both opposition rural incumbents face difficult fights.

It is noteworthy that Najib has visited almost all of the competitive rural seats, promising long-overdue development projects.

With almost half the seats in semi-rural constituencies, the outcome of the Sarawak elections will be determined in these areas. It is here where the opposition will succeed or fail to reach its goal of breaking the two-thirds mark of the incumbent.

Not surprisingly, the BN also holds an advantage in these areas. Nevertheless, the opposition has been gaining ground in semi-rural areas, following the national trend. Seats such as Batu Kawah and Repok were won in 2011, and gains were made in Senadin around Miri, a seat that has become more urban in the past five years.

This time round the contests in many of these semi-rural areas are quite fragmented, with many independents and parties contesting in multi-cornered fights. For example, the new seat of Batu Kitang is competitive, but a place where a three-cornered fight will hurt opposition chances. Similar observations can be made about Jepak, outside of Bintulu.

If there are breakthroughs, they may come from unexpected quarters, tied to the role of sabotage against BN candidates as a result of Adenan’s leadership in handling the choice of candidates and long-standing feuds within BN parties, inadequate attention to accommodating the local clans in candidate selection in communities and from local strongmen backed with resources and local networks to sway the outcome.

The results also may be shaped by greater access to information and expansion of opposition machinery and engagement in these seats, as has happened elsewhere. The BN’s advantage in semi-rural areas remains strong, where it wins close to 60 percent of support.

While the Sarawak campaign has not highlighted ethnicity openly, differences in ethnic voting and mobilisation remain prominent features of the Malaysian political landscape.

The BN relies heavily on Malay/Melanau support to control its majority in Sarawak, giving Adenan’s party Parti Pesaka Bumiputera Bersatu (PBB) a similar dominance in the state to that of Umno on the peninsula. Support among Malays/Melanau for the BN is higher in Sarawak than in West Malaysia, where more than three-quarters of Malays/Melanau supported the incumbent coalition.

In the 2013 general election this number increased to nearly 90 percent. It is likely that in this election, the number will return to the average in state elections, around 78-80 percent. Malay support for the BN in Sarawak contributes to their dominance in ethnically-mixed seats.

By contrast, Chinese support for the opposition mirrors the level of support of Malays for the BN, at more than three-quarters. The 2016 campaign has seen concerted efforts to woo Chinese voters, through allocations to schools, clan associations and repeated calls that Chinese could be effectively left out of the state leadership. 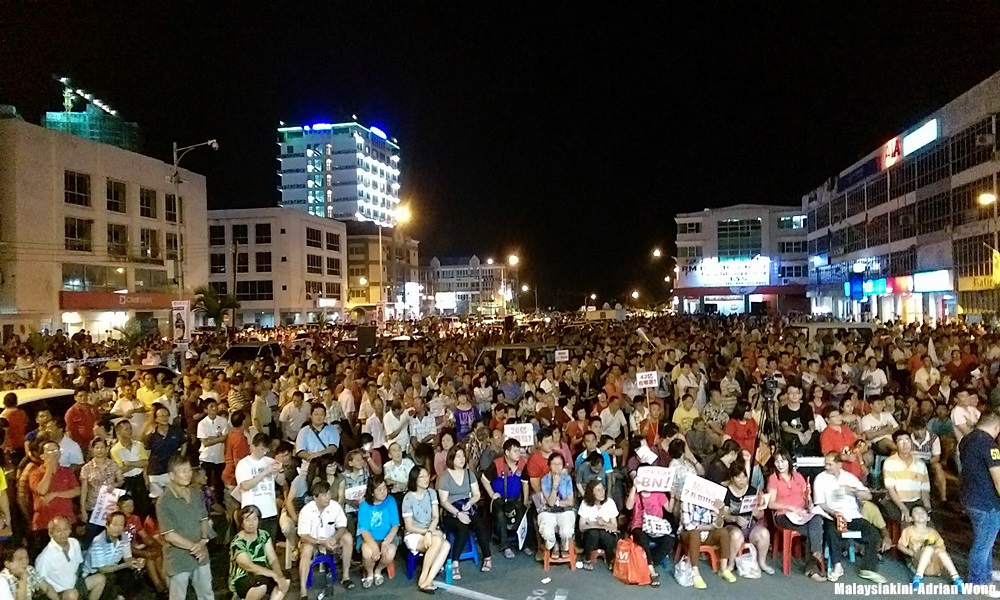 Adenan has avidly courted the Chinese electorate, while unpopular Najib has largely stayed away. This election, movement among Chinese voters will be decisive in the outcome. The BN hopes to wrestle back seats from the DAP in Sibu, Sarikei and Miri in seats such as Dudong, Repok, Meradong and Pujut, and set in place a national pattern of a return of the Chinese to the BN fold. The opposition is fighting hard to maintain Chinese loyalties, capitalising on concerns over corruption and the economy.

Meanwhile, the changes in voting among the Dayak communities over time have been more gradual. While the support levels of the Iban, Bidayuh and Orang Ulu remain consistently in favour of the BN above the majority in the last two polls, these levels of support have dropped over the last decade, by 5 percent for the Iban and Bidayuh and 10 percent for the Orang Ulu.

The 2016 campaign has focused on trying to win greater Dayak support, with opposition parties featuring their new and younger Dayak leaders and greater efforts in political engagement. The battlegrounds in the rural and semi-rural areas as well as debates around religion and representation will all be shaped by the votes of the Dayak community.

There is a perception that these communities can be easily influenced and are most impacted by money politics, notably vote buying. While clearly a factor in voting among the Dayak, it is important to recall that the surprise 1987 results were a product of a swing in Dayak support. The BN takes the Dayak support for granted and feeds the division within the community, using well-honed divide-and-rule tactics. Greater awakening with calls for better representation and leadership and splits among the Dayak communities could influence outcomes.

Any changes along ethnic lines, if they do occur, are likely to come from the young. A third important trend in Sarawak has been greater mobilisation of the youth for the opposition. Looking at variation within ‘saluran’ or streams in different polling stations allows for an estimate of differences in voting by age. The opposition is winning a majority of younger voters, while the BN holds onto the older electorate. 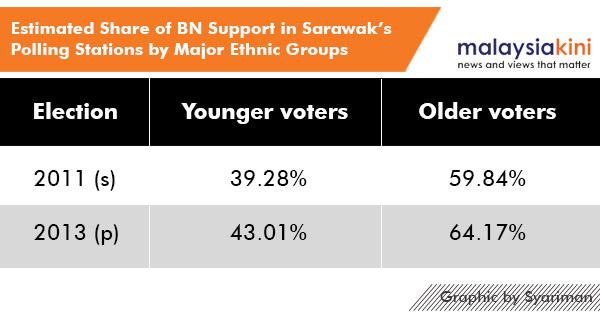 Sarawak is an older electorate than in other states in the country. Only 12 percent of the 2016 voters are in their 20s, with another 21 percent in their 30s. By contrast, half of the electorate in West Malaysia is younger. The young in Sarawak have been leaving, in search of work and, in the past few years, registering elsewhere, especially in Johor and Selangor. Nearly a quarter of the electorate in Sarawak (23 percent) is over 60, with 3 percent over 80.

While the older age compensation gives the BN an advantage, the nearly a third of younger voters can and has had a meaningful impact. The effect of youth can be especially important in the urban and semi-rural areas. They account for much of the change in the BN’s support levels and whether they come out and continue to support the opposition this round will be decisive.

The BN has not openly courted the youth this election, and Adenan’s appeal among the young is not as strong as it is among older voters.

The final tallies will importantly be shaped by how many people come out to vote. Youth voting turnout will be especially important.

Similar to Malaysians elsewhere, more Sarawakians have been coming to the polls. The 2013 general election was at a high mark for turnout in Sarawak, at 75.4 percent, up from 69.5 percent in the 2011 state polls. Voter turnout is important in Sarawak, as contests often come down to a handful number of votes, especially in fiercely-contested seats. In these close contests, voter turnout will affect the outcome, with higher voter turnout in close seats usually favouring the opposition.

There are important differences in turnout across the state. Traditionally, the BN’s more effective machinery and mobilisation of their supporters works to their advantage. For example, voter turnout in the BN’s core base, rural areas, is markedly higher than in urban areas. Similarly, as shown below, the BN is able to mobilise ethnic groups that give them an advantage, namely Malays/Melanau and Bidayuh - communities that have traditionally been among the BN’s highest supporters. In contrast, youth turnout is lower, as many younger voters do not even register, disadvantaging the opposition.

In the 2016 polls, turnout levels will likely drop, due to the lack of enthusiasm of the electorate for the campaign. The question will be by how much.

Who comes out will also shape the outcome. The opposition has been regularly calling for voters to return home. It is much easier (and less expensive) for the workers in Brunei to return than those across the South China Sea.

As polling day approaches, the variation and trends in support levels and political participation cannot be ignored. The dominance of the BN in their control of seats obscures important differences and changes that have been taking place. The BN is banking on stopping change in opposition voting trends to strengthen their advantage.

This is the second piece in a five-part series in New Mandala. The next article focuses on money politics in Sarawak. Read the first article here. Bridget Welsh would like to thank Sarawakians who assisted with the classification of polling stations, seats and analysis.