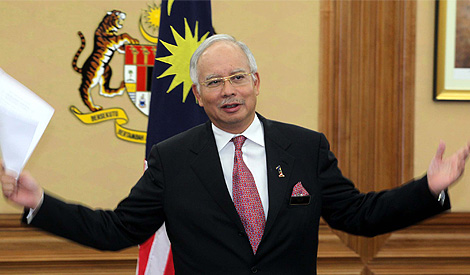 Malaysian Official 1 should resign but won’t

“A group of politicians deciding to dump a President because his morals are bad is like the Mafia getting together to bump off the Godfather for not going to church on Sunday.”

At the risk of ending up like former minister Zaid Ibrahim who exercised his democratic right of free speech in asking for Najib Abdul Razak to resign or step down, I too would ask that, with the latest revelations from the United States Department of Justice (DOJ), the prime minister step down.

I did the same when the corruption charges against Penang chief minister cropped up where I said “the Penang CM should take a leave of absence until these charges have been settled.”

Nowhere did I attempt any justifications for the Penang chief minister not resigning or stepping down because of the politically motivated nature of the charges (which I acknowledged) or the fact that the Malaysian system is broken and compromised.

Communications and Multimedia Minister Salleh Said Keruak in urging Malaysians not to jump to any conclusions said, "No one should rush to judgement before allegations are proven in court," which of course does not apply to Lim Guan Eng, who was summarily demonised by Umno propaganda organs as being hypocritical and corrupt.

In the case of the current Umno regime, the DOJ has claimed, “The Malaysian people were defrauded on an enormous scale (in) a scheme which tentacles reached around the world.”

The prime minister’s stepson was named in documents aimed at curbing the excesses of kleptocratic regimes and if this was not enough, US attorney-general Loretta E Lynch said, “We want to make clear to corrupt officials around the world that we will be relentless in our efforts to deny them the proceeds of this crime."

Najib's press secretary Tengku Sarifuddin Tengku Ahmad is absolutely correct when he observes that, “US Department of Justice's civil lawsuits were filed against the producers of ‘The Wolf of Wall Street’ against various assets”, however this does not detract from the fact that claims of innocence aside, the Umno regime and the prime minster has been implicated in one of the biggest cases of financial thievery investigated by various US enforcement agencies.

The spin masters of this regime will attempt to minimise this as something less than a criminal action brought by parties against a “third party” - Red Granite Pictures. The reality is that the DOJ has made it very clear that by drafting this document, it is aware of the scope of this alleged criminal undertaking and further processes are in place with actions that would have far more devastating results...