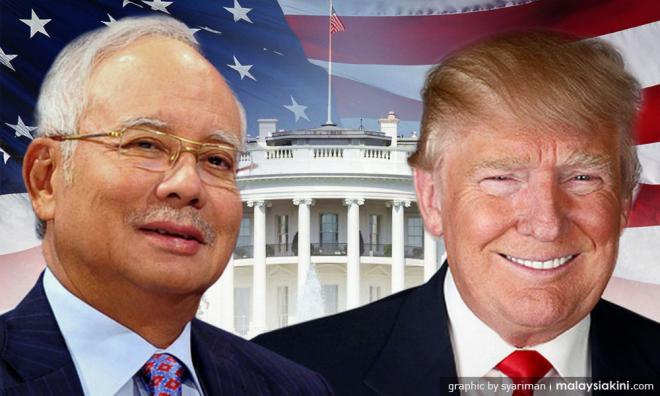 Trump, I suspect, will despise Najib for clearly being not nearly as ‘great’ as himself...

That’s the burning question provoked by reports that Malaysian Prime Minister Najib Abdul Razak is scheduled to visit the White House to meet US President Donald Trump on Sept 12.

On the face of it, of course, this could be seen as just another in a series of the customary pilgrimages by the heads of small, insignificant nations to pay homage to the world’s most powerful personage.

And so it certainly is, at least to some extent. But Trump is, to put it mildly, not your usual US president, and thus Najib possibly perceives him as a prospect for more than an exchange of the usual platitudes.

For example, the fact that Trump’s administration is under investigation for possible electoral collusion with Vladimir Putin’s Russian regime probably gives Najib some hope of presidential sympathy for the fact that the US Department of Justice (DOJ) suspects Najib of complicity in massive money-laundering.

And thus some prospect that Trump, perceiving himself to be a victim of persecution, as he frequently claims to do, might feel a kind of felonious fellowship with Najib and extend him some help in dodging the attentions of the DOJ.

Not that Najib has ever himself admitted to being the ‘Malaysian Official 1’ (MO1) identified in the DOJ documents pertaining to allegations of money-laundering associated with the multi-billion-ringgit 1Malaysia Development Bhd (1MDB) swindle.

But nor has he ever given any indication of who else MO1 could possibly be, or why he summarily fired an attorney-general of Malaysia who showed signs of investigating the 1MDB matter, just as Trump similarly fired a head of the FBI for refusing to go easy on him.

Besides hoping that Trump will welcome him as a similarly put-upon partner in suspected crime, Najib also possibly hopes that he and his potential friend in the White House share common, or at least somewhat similar interests, in Saudi Arabia...