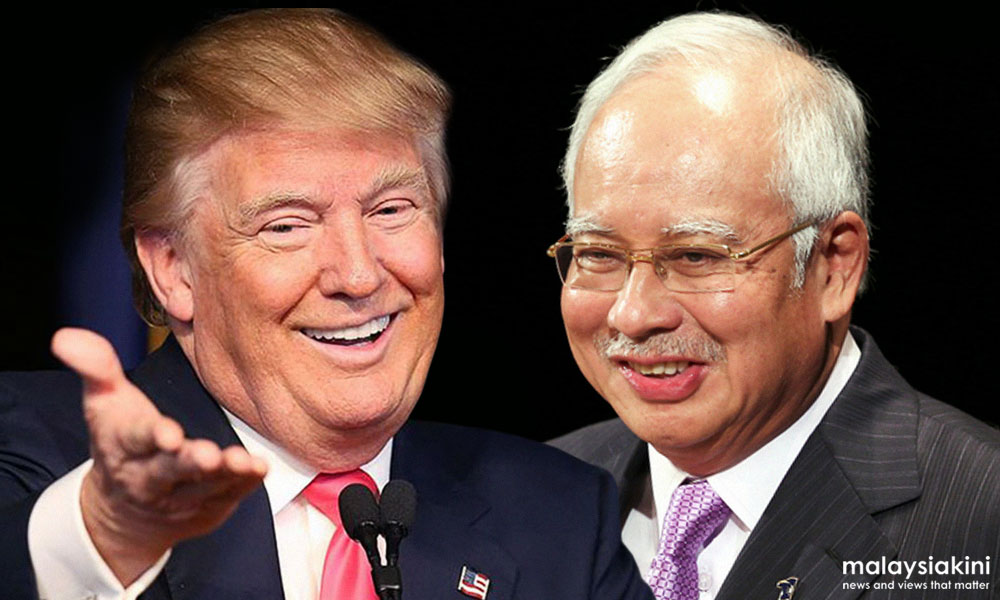 One of the questions I am asked (with a zeal that says more about the person asking the question than any answer I could give) these days, is why have I not written anything on the run-up to the Trump-Najib summit?

The boring answer is that I have no real interest in the meeting between these two scions who continue their family tradition of hoodwinking a gullible public.

Claiming that this really isn't an "official" visit sounds rather petty, considering the fact that as far as official protocols go, this particular Potus (President of the United States) has demonstrated as much disdain for them as he has conventionality and rule of law. No, this is as official as it gets - a meeting between two charlatans mired in scandals.

I mean, really, the “we have always been a seafaring, trading nation, going back centuries” is the kind of horse manure that would fool only the most egotistical, not to mention ignorant individuals, which I suppose the current occupant of the White House is. By “we”, does the current Umno grand pooh-bah mean “Bugis” or the “real” Malays I keep reading about?

Detractors of this meeting (in the US and Malaysia) are deluding themselves if they think that this meeting embarrasses either Najib or the Potus. The reality is that Najib is exactly the kind of moderate Muslim head of state that the Langley establishment props up because the alternative; the freewheeling, stoning, hand and head chopping Luddites (when it suits their agenda) are difficult to work with although they still prop them up. Just ask Saudi Arabia.

Moreover, while everyone has weighed in on the similarities between the two, Najib is, in fact, the embodiment of everything the Potus wishes he could do. Most times, the Potus is savaged in the so-called liberal elite media for coddling white nationalists, Christian extremists and the rest of the fringe right that unfortunately is his base. Please make the distinction between people who thought that he would honestly drain the swamp and those cretins who behave as if they should be left in a swamp.

Najib, of course, has no such impediments. The “ketuanan” ideology is mainstream in Malaysia. The state and the institutions of the state are testament to that fact. The opposition political strategy and agenda are testament to this reality. In other words, Najib’s real message to Trump is that racism and religious bigotry work.

This works so well that the opposition dares not come up with a counter narrative or ideology, fearing they would lose the majority Malay/bumiputera vote. It works so well that opposition supporters demonise personalities who advocate a fair and just society as “idealists” or worse, sub rosa rabble-rousers for the Umno establishment.

It works so well that Umno establishment personalities or proxies get to demonise entire communities and they suffer no sanction from the state. It works so well that there are numerous examples of the state security apparatus abstaining from carrying out the edicts of civil courts because it contravenes syariah rulings.

It works so well that the state refuses to acknowledge that there are thousands of stateless citizens in this country but hands out citizenship like confetti to Muslims, those pretending to be “Muslims” and other “immigrants” to bolster the Malay/Muslim demographic that apparently holds the keys to power.

It works so well that the hopes of some people who claim that Malaysia is an apartheid state lay in the hands of a race-based political party led by the man who these same folks claim is the architect of this state of apartheid. It works so well that non-Malays/non-Muslims dare not advocate and censure any non-Malays who advocate that a non-Malay/non-Muslim can aspire to the highest office in the land...