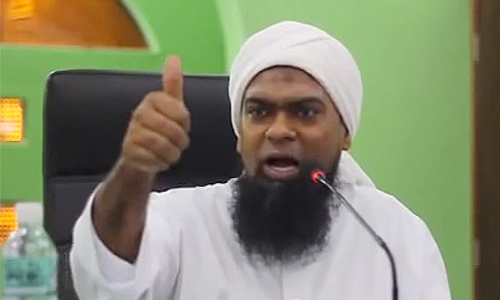 My nephew, a young mujahid

COMMENT | When I see ustaz Shahul Hamid Seeni Muhammad – the dude who urged Muslims not to get haircuts in non-Muslim salons in his two-year-old YouTube video which went viral recently – I am reminded of my nephew.

Not only are they both mamak, they also happen to look very much alike, and like the infamous ustaz, my nephew too is a religious teacher and a preacher.

My nephew was born in a family who thought religion was the answer to everything. When he or his siblings fell sick, they visited religious healers for chants of Quranic verses more than they did clinics for medicine.

When it was exam season, they would take gulps of Zamzam water in the morning instead of revising the night before.

And when things got tough for the family, instead of working hard to find a rational solution, they would make special contributions to the mosque, hoping the Almighty would ease their troubles.

It may sound odd to many, but to my nephew and his family, this was the norm.

When my nephew ended his high school with less than enviable results, the family accepted it as fate, and sent him to a religious school in Sri Lanka.

He was supposed to spend a year there. That became two years, and then four. At the end of the four years, my nephew returned a 'hafiz', or someone who has completely memorised the Quran. He was just 22.

But despite his mastery of the holy book, my nephew knew very little of anything else. Thanks to his upbringing and the kind of education he received, he lived in a very different world to everyone else, which completely changed his outlook on life.

Among the first thing my nephew did upon returning to his family in Penang was to change his name to Mujahid – literally, one who strives in the path of the Almighty, or more simply, a "pejuang Islam" (warrior of Islam), as I recall him telling me donkey’s years ago.

My nephew believes that every Muslim has a responsibility to wage jihad in the name of Allah. Not doing so would mean failing the Creator, and becoming a disgrace to the religion.

With this mindset, he began preaching, starting with his own family and relatives.

"Do not colour your hair. It is sinful."

"Do not wear shorts to play football. It is sinful."

"Do not put up posters of footballers and celebrities on the wall. The angels will not step into your room if you do so."

"Do not hold on to keychains with figurines. You may end up idolising it."

"Place a cloth on your head before consuming food as a sign of respect to the blessings of Allah.”

And that was just the beginning...