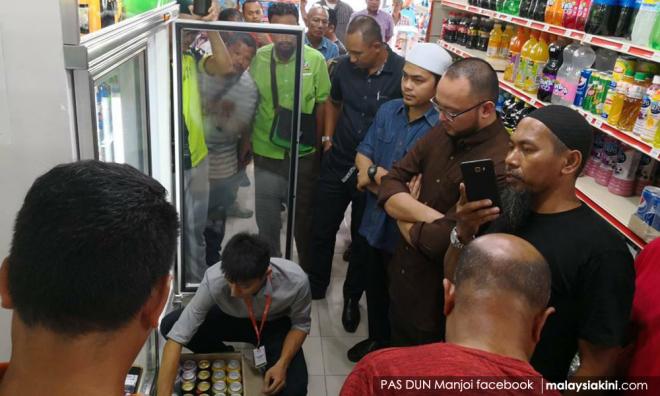 Harapan should not ignore religious extremism

“This is the start of something positive and I hope that it can be picked up by other NGOs.”

What would have happened if a non-Muslim customer was about to buy a can or two of his or her favourite alcoholic beverage just at the time when the religious thugs were creating “something” positive” in the Kampung Manjoi convenience store?

Supposing a fight broke out, which could happen when someone is denied one’s right to purchase legally sold goods. Messages would be passed on social media and soon, a group of religious thugs would have got exactly what they wanted, a clash of values in a small kampung which would have blown up because they know when it comes to Islam, nobody in authority wants to stand up to religious thuggery less they are painted as being soft on Islamic values.

What should be troubling for people who voted for “ubah” is that this the same script (as Umno) is used by the Pakatan Harapan federal government when it comes to these kinds of religious issues. Where is the condemnation by Harapan political operatives? Where are the reassurances by Harapan top guns that the rule of law trumps supposed Muslim sensitivities?

Where are the numerous posts on social media by trigger-happy Harapan politicians about how this kind of thuggish behaviour in the name of religion is not acceptable in this great diverse country of ours? Where are the moderate Islamic politicians who always seem to go silent when it comes to incidents which put them on the opposite side – or at least it should – of the religious extremists in this country?

Whenever something like this happened during the Umno regime, the opposition now establishment politicians would blame Umno and the federal government for encouraging such incidents. Now that the opposition is the federal government, why is there no action or condemnation from the very people who claimed that they were saving us from this horse manure

Instead, people blame the alleged outsourced Umno thugs instead of putting the blame not only the Perak menteri besar, but most importantly Harapan top guns, who claimed that under them, issues like these would be solved in a fair and just manner.

Oh, I am sure people would throw up hundreds of excuses or justifications for silence. Now that the Perak police have opened an “investigation”, some people would like to go back to the bigger issues facing this country. How sickening. Opening an investigation? That video clip is evidence of a crime being committed. The perpetrators should be in a police lock-up and awaiting charges instead of basking in their fame. What other evidence do you need?

Okay, say you have video footage of someone breaking into your house, would the police need to open an investigation before apprehending the culprits? What exactly needs to be investigated? What exactly needs to be discovered? More importantly, why has the federal Harapan government not made any official overtures to the Perak state warning them that this kind of inaction would not stand. This, after all, is a question of national security.

The most shocking aspect of this incident is the words of Perak Menteri Besar Ahmad Faizal Azumu when “he also advised other shop operators operating in other Malay villages to be more sensitive to the feeling of locals." And this does not merit an official response from the Harapan federal government...