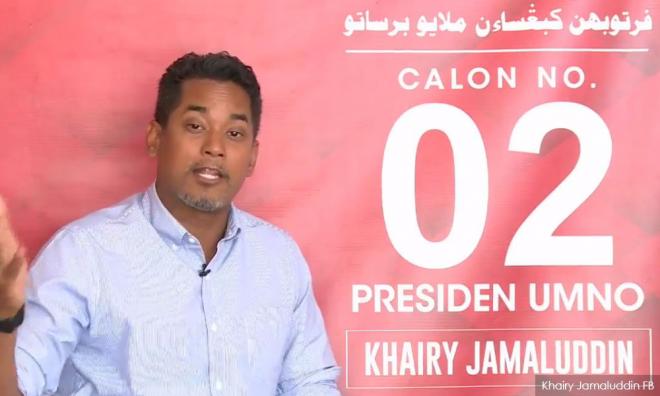 COMMENT | With Umno going full metal far right, the only person in the largest opposition party who seems to be talking any sense is former youth chief Khairy Jamaluddin.

His failed bid for the Umno grand poohbah post indicates that the old guard and their old ways will continue to hold dominion over the Umno base. Khairy’s rhetoric of Umno being a big tent party for the Malays is from the playbook of the GOP, which makes similar claims. But unfortunately, that’s not the reality.

A long time ago, when I first started writing for Malaysiakini, I made it known that Khairy was my bête noire. No idea why I said it, but something about this young man rubbed me the wrong way. I could go over the litany of his misdeeds, but that would be hypocritical considering I have advocated for the motley bunch that runs Putrajaya now.

I have to take Khairy’s rhetoric at face value. With MCA down for the count for the time being and MIC – god only knows what they’re doing – the only opposition we have is a Malay one.

I doubt anyone could make a decent argument as to how Umno and PAS are going to make an effective opposition for all Malaysians. This leaves a few lone political operatives to hold the current establishment accountable. Khairy is one of them.

And it’s going to be one hell of job. Not only is he going to face the online opprobrium of Pakatan Harapan partisans, he’s also going to have to face the machinations of his own party. The reality is that even at the height of his influence, Khairy was despised by the far right elements who are now firmly in control.

A reader asked me, how I would react if Khairy joined Bersatu or any other Harapan party. My answer is, why not? Have you seen the so-called best and the brightest of Harapan? At least Khairy talks a good game and has practical experience when it comes to the business of governing.

Besides, at this moment, there are games afoot between the various Harapan power groups, which would make it very interesting if someone like Khairy was in the mix. If he brings his base over to Harapan – and he does have a base – it would be interesting to see how this impacts the various Malay power blocs in the coalition....