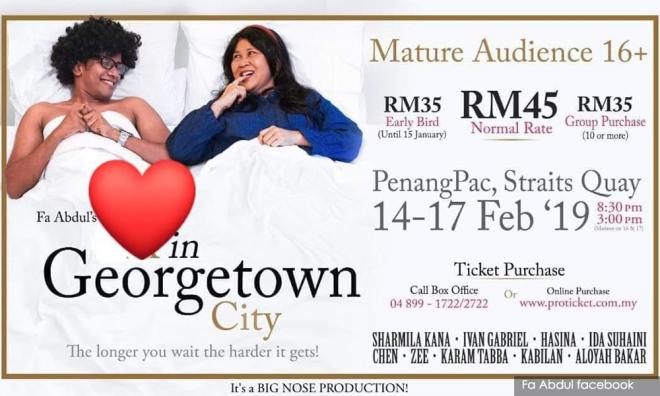 Sex, lies and hypocrisy in Penang

“And what sort of lives do these people, who pose as being moral, lead themselves? My dear fellow, you forget that we are in the native land of the hypocrite.”

COMMENT | The cancellation of Fa Abdul’s play 'Sex in Georgetown City' (later renamed 'Love in Georgetown City'), is the kind of fascist tactic that most Malaysians should be horrified with, but which goes unnoticed because people do not understand how religious extremists count on small wins to achieve a big victory.

I read Pravindharan Balakrishnan’s letter to Malaysiakini about the cancellation of the play and marvelled at how Pravindharan talked about “functionalism,” our education system and conflicting normative values, which made it sound like we were at a tea party instead of a knife fight in an alley, which is exactly what the fight against religious extremism is in this country.

It is ridiculous talking about our screwed-up education system when the reality is that in Penang, for instance, the state government, which likes to claim it believes in secular values, has made it a point to out-spend the previous state government when it comes to Islamic funding. Just last year when Lim Guan Eng was still chief minister, he crowed that RM4.11 million to Islamic affairs showed that the state government did not neglect the welfare of Malays and Islam in the state.

I have made this point numerous times. When you fund organisations that promote a specific kind of Islamic narrative, what you get are religious bigots and extremists, probably enjoying gorging on state coffers, spouting religious propaganda to clamp down on our public space and define public policy.

So when the Penang mufti. objecting to a play he did not see because of its original title, says this - “Art and entertainment activities that are left uncontrolled will only lead to the destruction of humankind” – what we are left with is not a religious operative attempting to crack down on our public space, but rather state-sponsored, state-funded and state-sanctioned religious thuggery, that is attempting to define art and what is acceptable discourse in our public space.

Forget functionalism, this is about fascism. This is also about lies and hypocrisy. Both of which are the currency extremists trade in. Penang PAS Youth information chief Ahmad Shafian Ujar claimed that this play will lead to ‘free sex, baby dumping, drugs and other social issues.”

Which community is he representing? I did not see Christian, Hindu or Buddhist religious operatives protesting this play. So he’s there not for the non-Malays, but for the Malay community, the Islamic community.

What does this say about these social issues? It tells us that these "social problems" are more prevalent in areas where religious dogma is public policy This is a fact. Now, those places, I am sure, are not staging English-language productions with titles such as 'Sex in Kota Bharu'...