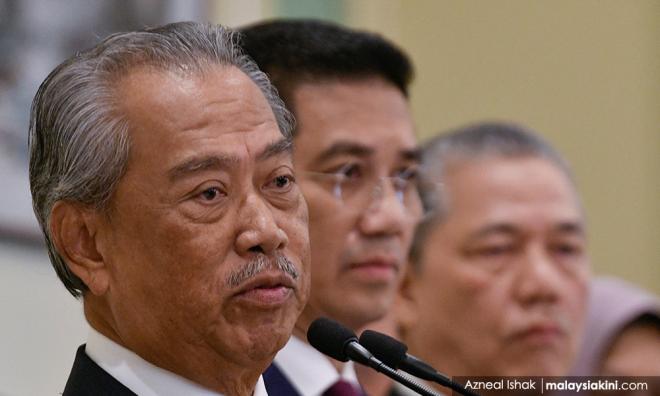 COMMENT | Even as the government steps up in a big way to fight the Covid-19 pandemic, backroom manoeuvrings are taking place to ensure that when Parliament meets sometime in May, it will have the necessary number of MPs to survive a no-confidence vote.

It may also be true to say that the government and in particular Prime Minister Muhyiddin Yassin is using the pandemic to strengthen his position and his credibility in the eyes of the public so that people support him to continue as PM.

Muhyiddin’s grand plan to maintain his majority is a simple one, and one that has been used time and again in the Umno-BN government – reward the faithful even at the expense of competence, accountability and integrity. Satisfy the people who will support you.

Thus it was no accident that his cabinet, after he was picked by the king to form government, was enlarged.

The Perikatan Nasional government has been criticised for forming a cabinet of 70 members, including deputies, as opposed to 55 in the previous Pakatan Harapan government. But other things take precedence when Muhyiddin’s government came to power through the backdoor – it was not what the people voted for.

What happens is that he has the undying loyalty of some 70 MPs – give or take one or two who may be made senators first – tied to him inseparably by bonds of money, power and patronage.

The ministerial post comes with many privileges, including a purse which goes up by more than RM50,000 a month or RM600,000 a year in terms of additional salaries and allowances, including posh accommodation, cars, drivers and help.

And then there is the opportunity to dispense patronage in the form of contracts, awards, publicity, introductions and so on, which can take the pay packet to much more than that, even though much of it will be illegal. But as we all know, that has not stopped anyone before.

With 70 MPs in the form of ministers and deputy ministers in the bag, he will need 45 MPs more for 115 MPs and a comfortable majority in the 222-seat Parliament. That would mean giving a sizable number of them some plum positions within government corporations and agencies.

Such appointments of Umno and former Umno warlords to key positions of power, money and patronage will help round up the number of MPs to keep Muhyiddin in power by cascading the benefits downwards.

Never mind that it harks back to former PM Najib Abdul Razak’s policies of in effect buying loyalties to him, the immediate plan is to keep this backdoor government and Muhyiddin in power.

That explains the sudden slew of people losing their positions at government agencies and even government-linked companies (GLCs), some even before appointments expire and even when they have been doing a good job.

These are rather needless from the point of view of the country and the unprecedented problems it faces from the Covid-19 pandemic, but still political expediency and the low calibre of our politicians result in the reality that these exist.

Let us look at one in detail – the appointment of the Social Security Organisation (Socso) chairperson. As Focus Malaysia reported in an exclusive story, subsequently confirmed, insurance veteran Zakri Khir resigned as Socso chairperson on April 7.

Zakri was appointed on Oct 8, 2018, by the now-defunct Council of Eminent Persons, to chair Socso based on his expertise in the insurance and risk business. He is also the first Malaysian appointed as country manager for Allianz Malaysia Bhd.

His successor was supposed to be Sabak Bernam MP Mohd Fasiah Mohd Fakeh of Bersatu, an MP who defected from Umno in December 2018. He seems to have no corporate track record. But when he went to Socso to take up his appointment, he was told that a legal clause stops him from becoming chairperson.

The Socso Act bars any member of the legislature from being appointed to the position.

How embarrassing! In their clear and present haste to get MPs appointed to these positions, those who make decisions have not even bothered to check up properly on the legislation.

Reports and talk out there are about further major changes taking place, including at GLCs. According to Focus Malaysia, more GLC heads are expected to roll and PN MPs are expected to fill this.

Some of the nominees include Umno heavyweights. They are Arau MP Shahidan Kassim for Felda and either Besut MP Idris Jusoh or Machang MP Ahmad Jazlan Yaakub for Majlis Amanah Rakyat (Mara).

The current Felda chairperson is Mohd Bakke Salleh. According to an April 3 report by Singapore’s The Straits Times, he had been shown the exit at the Malaysian Palm Oil Board (MPOB). Bakke was appointed as Felda chairperson on June 26 last year on a two-year contract.

Other leadership changes include the termination of Noripah Kamso as Bank Rakyat chairperson on April 3. Her contract was due to expire only in December this year.

On April 1, Malay Mail reported that Noor Farida Mohd Ariffin had been removed as Human Resource Development Fund (HRDF) chairperson. Her entire board was sacked, too. Noor Farida had been replaced by Nelson Renganathan, the chairperson of Regent International School and former MIC Youth chief.

Such changes are rather disruptive and unnecessary but show that politics is very much in play behind the scenes despite Covid-19 and all the challenges to our livelihoods and the economy that it poses.

It is a huge step – backwards.