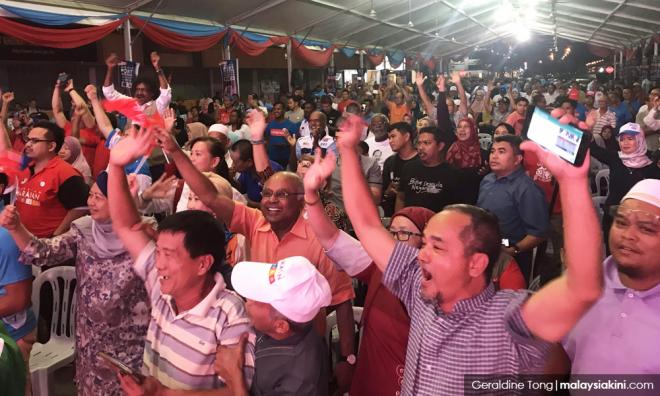 COMMENT | The people, not politicians, saved the country and we'll do it again

COMMENT | While the Pakatan Harapan political manoeuvrings have reached an impasse, do politicians care about what their supporters and the public think of their antics? Politics, a tarnished activity, still ought to be driven by what's good for the welfare of the people and not the selfish ambitions of politicians.

The betrayal of two-time Prime Minister Dr Mahathir Mohamad by two-timing political comrades elicits no pity. Instead, it begs the question of what he was brewing with his backstabbers in the first place.

What must upset many Harapan supporters and baffle Malaysia watchers is why it is crucial that one man, who has been in the country's top job not once but twice, and is the cause of their plight, thinks he should be given a third chance to helm the government at his advanced age.

For a political coalition that has taken the high ground and managed to oust the kleptocrats from the government after GE14, is winning power at all costs now their most important priority?

Whither integrity, moral principles, and other decent values many Malaysians uphold and want Harapan politicians to defend? How is a government formed from solicitation, inducement and other questionable means, however legal, different from a treacherous backdoor one?

Whither the long-term future of a despoiled nation, riven by racism and contaminated by corruption?

As if a political crisis was not bad enough, politics is now undermined by a moral crisis. What happened to the outcome of the infamous sex video? Whither moral accountability, moral conscience and moral conduct?

In contrast, many simple Malaysians, whom I admire as the true patriots of Malaysia, made huge sacrifices so that they could have a trustworthy government in recent past elections.

Through their unwavering support for a new government, a nation was saved from racism, corruption, and outright abuses of power. So we thought. But, sadly, will they continue to be shortchanged? Will they be hoping against hope?

I recall a Malay ice deliveryman, whom I met delivering ice to a coffee shop before GE13, who was intent on helping to remove the BN government. His passion, matched by personal sacrifice in taking unpaid leave to help the opposition, can't be forgotten.

It is such ordinary but concerned,  proactive citizens who offer a glimmer of hope that the Malays, when awakened, will reject the deceptive leaders. The vociferous and passionate Malay 'iceman' was my idea of a Malaysian hero that day.

A former Chinese classmate was another classic example of ordinary non-vested citizens doing something to advance their country. She laboured tirelessly in promoting the electoral integrity of the general elections.

There are many unsung heroes who made it possible for Mahathir to return to power. However, how has he regarded and rewarded them? How has he shown them any respect?

All the talk about how Mahathir made the pivotal difference in GE14 may have ignored reality. It was the grassroots, ordinary voters, who had kept the anti-BN momentum from GE13, and who voted for Harapan that made the difference, lest the politicians forget.

And the outstanding technocratic efforts of PKR's Rafizi Ramli and Tindak, not overlooking the preceding years of Malaysiakini's free media and pro-reform news reports.

Walking with and meeting Malaysians of diverse backgrounds during 'Bersih 5', I knew a BN defeat was in the offing, sooner or later. At the eleventh hour before GE14, while all the 'soothsayers' had predicted a BN victory, I wrote a contrary article. My thoughts on this are in the Malaysiakini archives.

At Bersih 5, it saddened me to see ordinary Malaysians feeling repressed like 'sheep without a shepherd' by a system that retards the progress of the people. Now the PN government must send a chill along the spine of voters who thought they had seen the back of BN.

Calling Malays lazy is ill-thought, gratuitous, rude and unfair. A form of taunting and bullying, if repeated, I thought. Many Malays are not lazy but simply misled. A leader should never demoralise the people who put him in power. Many Malays are extremely talented, diligent and decent people. Let's hope more like the Malay iceman will reject the corrupt politicians of their race.

Many Malaysians living abroad returned to cast their vote in GE13 and GE14. Each time they spent a lot of money to travel and ensure the opposition won power. 'Never give up' is the thought that must constantly be in the people's minds.

When Mahathir (below) resigned as PM, was he thinking only of himself or the many millions of voters who prayed, sacrificed and worked to put Harapan in power? A good and considerate leader will never use power obtained from the blood, sweat and tears of the people with reckless abandon.

The driving force of change is not political leaders. It is the rakyat. There is a pent-up feeling of anger, frustration, disappointment and other mixed feelings against the corrupt leaders and the flawed system. The rakyat make the change they themselves need. They can no longer trust their politicians, with some exceptions.

For too long successive governments have squandered the opportunities and the people's money. They do not walk the talk. They created the race divide and pretended to unite the people.

If, after 60 years, a government cannot help the Malays, and Mahathir was in charge for nearly 24 of those years, what makes anyone think he can help them in six months? Are the true patriots and countless other concerned citizens willing to stand by and watch the antics of the politicians, only to be let down each time? I hope not.

Those who cannot remember the past are doomed to repeat it said Spanish- American philosopher and writer George Santayana. Lest we forget, lest we regret, don't sleep with a political python.

The rakyat are between the devil and the deep blue sea. Their choices of good and decent leaders are limited. But there is still hope, however daunting it looks now. I believe Anwar Ibrahim (below) remains the only politician I can think of who may work with others to restore Malaysia as a respectable democratic nation in the region. But he cannot do it alone.

He needs a solid band of men and women who are committed to good governance, who are true patriots and who are tested in their roles and activities in civil society. Most of the band of mighty men and women are the true reformers already engaged in changing their society. They are the salt of the nation.

There has to be a fresh political alliance of true patriots if Malaysia is not to go to the dogs, savaged by ravenous wolves. Anwar Ibrahim may want to remember his original mission from 1998. The reason Harapan won in GE14 is that the voters were sick of the kleptocrats and wanted reform. They did not forget.

Anwar is not flawless but which politician has no flaw? Until a new generation of leaders is groomed, he remains the best hope for reform. Far better it is for Anwar to build a strong team with DAP, Amanah and new blood from civil society to win in GE15 - than to be in a failed marriage of convenience with a brood of vipers.

Anwar broke the taboo that opposing the government is challenging the Malays. The truth is many corrupt Malay politicians have been robbing the Malays blind but blamed others.

Nazir Razak, the brother of then PM Najib Razak, decried the 'bastardisation of the New Economic Policy'. He was openly stating what everybody knew. Does a leopard change its spots? Winning GE15 outright ought to be the goal of Pakatan Harapan. Mahathir cannot be relied on to deliver the reforms.

Harapan leaders must bite the bullet and have the determination and self-respect after GE15 to walk through the front door into Putrajaya, yet once more, without a monkey on its back.

STEVE OH is an author and composer of the novel and musical Tiger King of the Golden Jungle. He believes good governance and an engaging civil society are paramount to Malaysia being a unique and successful nation.