It seems ridiculous to me that, as members of the species that calls itself Homo sapiens, we’re not wise enough to realise that it’s enough of a struggle to survive the one short lifetime we’re individually allotted without wasting our energies striving for superiority over each other.

But it’s hardly surprising, I suppose, that our intellects still have so far to go in achieving ascendancy over our instincts. After all, it’s only a relatively few thousand years since our cortexes enabled us to transcend nature’s tooth-and-claw law of the survival of the fittest.

So, as ‘civilised’ as we fancy ourselves to be, and as aware that co-operation makes more sense than competition, it’s no wonder that primitive emotions still prevail over reason in our relationships with our fellow humans.

Not that we haven’t made a great deal of progress. Most of us are committed, at least in principle, to caring for the less physically, mentally and financially fit among us. Many of us believe passionately in equal rights and opportunity for all.

We fight for the rights of our weak or victimised brothers and sisters, fund charities to go to their aid, beg the UN to protect them with sanctions and peace-keepers and even, as a final resort, fight wars on their behalf.

But many of us are also, it seems, still our neighbours’ worst enemies. We are driven to squander our own and everyone else’s time and energies in fatuous and ultimately futile attempts to show that we’re the biggest, baddest, fastest, strongest, meanest, richest, luckiest, sexiest, holiest or somehow the most superior people on the planet.

Not that I’m against striving for excellence, just as long as we keep a sense of proportion and stop short of pathological displays of domination and triumphalism. 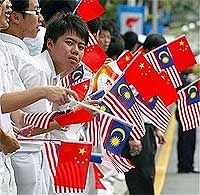 The Olympic Games are a classic case in point. Purportedly a celebration of fraternity through sportsmanship, they’ve been subverted in the century of their modern existence into a sort of symbolic four-yearly world war.

Qualities like sportsmanship, grace and courage still survive, thanks to the indomitable spirit of many of the athletes, but such values are increasingly replaced by hysterical official and media expressions of ‘patriotism’ in which nothing counts but medal tallies.

As debased, commercialised and ridiculously expensive as it is, however, the ritual warfare of the Olympics is of course vastly preferable to the real thing. Communist China’s drive to demonstrate its superiority over the US – or vice versa – beats the heck out of staging the contest with nuclear weapons.

But warfare persists nonetheless. In Darfur, for example, where China supports the Sudanese government with arms and munitions, while the US fights on in Iraq and Afghanistan.

And no sooner had the Olympics started than US and NATO ally Georgia up and invaded South Ossetia, provoking Russia into a massive counter-strike.

Meanwhile, the usual suspects elsewhere are up to their customary fun and games. The Generals in Burma are still sporting the medals they’ve awarded themselves for their defeat of democracy, Mugabe and his ZANU-PF party are still claiming victory in Zimbabwe, and Barisan Nasional continues to treat Malaysia to world-class performances in judicial gymnastics and synchronised spinning.

Skullduggery will be in vain sooner or later, of course, as history shows that nobody wins the human race forever, or even leads it for long.

History is nothing if not a long, long litany of ‘winners’ who once dominated the world, at least as they knew it, and today are nothing but losers or even almost lost to memory.

Whatever became of, to name just a few in no particular order, to the Etruscans, Spartans, Macedonians, Romans, Hittites, Huns, Mongols, Vikings, Aztecs and Incas?

Whatever became of the British, Spanish, Portuguese, Dutch, Austro-Hungarian and Ottoman empires, or the Greater Asian co-prosperity sphere, or the thousand-year Reich or the USSR?

We all originated in Africa, or so science confidently informs us. Africans and people of African descent are still winning the human race in a great many sports, from distance-running to basketball. And the world’s top golfer, Tiger Woods, an American Afro-Asian.

Asians are winning the human race in sheer numbers these days, and soon may be pre-eminent economically too if India and China sustain their current rates of growth.

Of course who’s winning the human race right at this moment depends entirely on your point-of-view.

In my book it’s the Scandinavian nations for their combination of prosperity, social consciousness, environmentalism and good governance. And for some of the same reasons, I rate Canada and New Zealand right up there too.

The US is bigger, richer, more populous and has a far more powerful militarily than any of the above. However, it is too arrogant and overbearing, in my opinion, for its own and the rest of the world’s good.

China is big and powerful too, and fast overtaking the US economically, but far too corrupt, unprincipled and undemocratic to be a credible contender for leading the human race anytime soon.

But in any event, the struggle for supremacy, be it military, political, economic, technological or athletic, is ultimately a losing proposition. Whatever tribes, sects, ethnic groups, parties or nationalities we’re born into or choose to join, we’re all in this human race together.

So the sooner we can relinquish our primitive urge to win at all costs, and rid ourselves of leaders who treat us like losers, the better off we’ll all be.