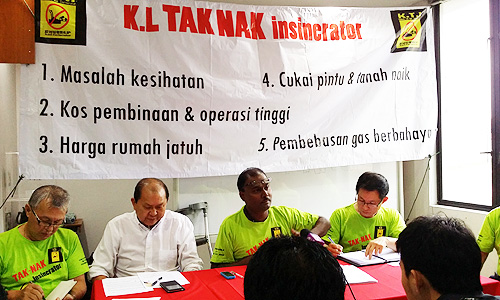 Anti-incinerator group must show how landfills can be better

Firstly, thank you to the ‘We Anti -Kepong Incinerator Group’ for their 2,000-plus Facebook likes for writing a post replying to my post. I will try to respond.

I am not an environmental expert or researcher, but I am a resident, and many people in our area are not experts. Our views may not be valid because we did not study this area.

I accept the two issues they raised:

1) The site is located between two petrol stations and an ex-landfill, emiting (sic) methane gas; and

2) Currently, the government is building a high rise apartment for civil servants at Taman Metropolitan Kepong, which is just right next to the proposed site for incinerator.

I hope the Ministry of Urban Wellbeing, Housing and Local Government can answer this before they allow any incinerator to be built.

But after that, the KL Tak Nak Insinerator (KTI) people seem to have some weak arguments.

They claim the ministry built bad incinerators in Pulau Langkawi, Pulau Pangkor, Pulau Tioman and Cameron Highlands, that the auditor-general is unhappy with the management, and that there is poor performance in maintenance.

It seems they are anti-government because there is expectation this new incinerator will be worse, because it is the government overseeing. Should they not value the incinerator choices between MRCB and DRB-Hicom, and their technology partners?

Or are they saying that it does not matter which company gets the jobs, the local company and their international partners, as long as it is through the ministry, it will be a horrible job.

Then they mention XCN Technology Sdn Bhd and their work in Pulau Langkawi, Pulau Pangkor, Pulau Tioman and Cameron Highlands. Did they not say that the ministry built the incinerators?

So, who built the four incinerators? The ministry or XCN? If the latter, then better process is the demand, and not choosing XCN again for the job.

The way they talk about landfills, it is almost like the perfect solution. I said before that both solutions will have pro and cons. Are they saying, there are no cons with landfills, because it is very public information that many environmentally excellent countries have chosen either incinerators, landfills or a combination? Why is that not a point?

They just claim that every country in the world is moving away from incinerators because they visited Japan.

They say the landfill managements are better and safer, but those are also by companies, right? How can we be sure by just from reading their website? Because the ministry is regulating them, right?

But if the ministry is useless at supervising, then they won’t get anything right, incinerators or landfills.

I am curious why they are saying the ministry will get the management of landfills right, but that they will not get right any incinerator in the future.

Finally, their argument that landfills can deal with the capacity is backed by suggestion that recycling is already working in Kuala Lumpur.

They say: "Lately, one can observe a lot of 3R containers being placed in shopping complexes, offices and residentials."

They have been in the posh malls for donkey years. I will just say, a strategy to defend landfills based on recycling backed by the presence of designated trash bins is very weak. Before they only attack the incinerator, they have to show their plan works.

We will still have our garbage, and we need to do something, not just complain.
This is how ordinary people see the issue. Now, it is some kind of battle between political parties, which is dragging all the regular people and our waste into the problem.