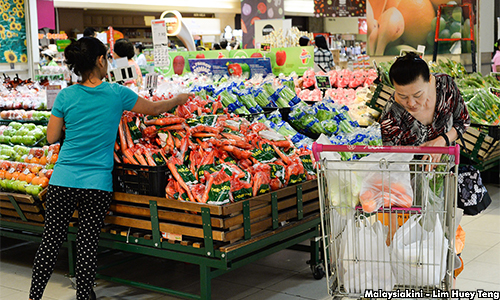 Through proper planning, Selangor could bring down the prices of a wide array of agricultural produce.

Selangor has tens of thousands of acres of idle land in the outlying districts of Hulu Selangor, Tanjung Karang, Sabak Bernam, Kuala Selangor, Hulu Langat, Kuala Langat and Sepang which can be used for the large-scale production of agricultural produce.

A lot of the jungles in these districts consists of secondary forests and brushland which are of little economic or even environmental value.

These lands can be used for more economically worthwhile projects such as farming of vegetables, fruits, livestock rearing and others. The state can open up these areas and alienate or lease the land to experienced and genuine farmers, with each one getting about five to10 acres on a temporary occupation licence (TOL) basis.

Selangor can become a major producer of a wide variety of agricultural produce, as it has a large population and a higher standard of living, which will ensure that agriculture will be profitable and viable.

Selangor need not depend wholly on Cameron Highlands and other areas even for lowland-growing vegetables and fruits. With foreign workers easily available to work in the farms, there should be no excuse.

Selangor ‘s large resident population combined with millions of foreign workers, tourists, migrants from other states and others have pushed up the demand for food and, coupled with the short supply, has increased the consumer price index.

Presently, vegetable farming is done under power line reserves or on untitled land in a piecemeal fashion.This is an unsystematic and improper way of farming, and supply will always be less, thereby hiking up prices. High prices for foodstuffs lead to a  higher cost of living.

Selangor was declared a developed state in 2005 and therefore should concentrate more on bringing benefits to the existing population and stop behaving like a backward state.

It should approve or select only investments and industries that are clean and utilise high technology, factories that depend less on foreign workers, and non-polluting industries that do not cause environmental degradation.

There is enough economic activity in Selangor to ensure that the spillover and multiplier effects will always keep the state prospering. About half of Selangor is urbanised and the rest is rural, and this good balance should be maintained for the benefit of the people.

The urban sprawl is decreasing the quality of life as more and more green areas, parks, and plantations, are sacrificed for the insatiable demand for houses, roads, industries, commercial areas, shopping malls, educational institutions and other purposes.

Selangor’s roads are congested, housing areas are crowded, rivers are polluted, and public areas are dirty and unsanitary.

The entire local government system has broken down with the exit of Alam Flora, which had the resources and the manpower as a large company to keep Selangor tidy. It has, since 2008, been replaced by a large number of small-time contractors who in many cases do not even have the right tools to do a job competently.

At the local government level, Selangor residents and rate payers are truly infuriated at the way things are, and may reveal their anger and frustration in the impending general elections unless there is a major spring-cleaning effort before the polls.

All it takes is for the Immigration department to conduct an “operasi” and there will hardly be any municipal workers to be seen for the next few days. This is how bad the present system is.

The Pakatan councillors are mostly incompetent and indifferent, and are adding to the woes. The state assembly representatives hardly monitor the situation.The people may not be angry with the state government but they definitely are with the local authorities.

The lack of local council elections has enabled this system to remain unchanged for decades despite Selangor becoming more urbanised and in need of more democratic procedures and practices.

There is a need to control development in Selangor, as the price of this progress is becoming too costly. Billions of ringgit are now needed for large-scale water projects such as the one drawing water from Pahang, the incinerator plant in Broga (now abandoned), river-cleaning and beautification projects, infrastructure such as roads, highways, flyovers and large drains to control flash floods in urban areas.

The endless increase in the number of employees in the local authorities and other Selangor government offices is now becoming a big drain on Selangor’s annual budget.

There is also a need to control Selangor’s booming population, especially those migrating from other states and the number of foreign workers.

Selangor should aim to be a developed state in the true sense of the word: enable people to have a healthy lifestyle by having more playgrounds, parks and green lungs; reduce all kinds of pollution; initiate more re-cycling efforts; have more affordable housing schemes;  introduce better public transport;  have proper social welfare programmes to help the very poor and handicapped; have better maintenance programmes;  and have stringent checks to ensure less wastage of public funds.

Since Selangor is a developed state, the people have high expectations of living in a first-world environment, and the government of the day needs to ensure that this ideal and objective are realised for the benefit of the people.