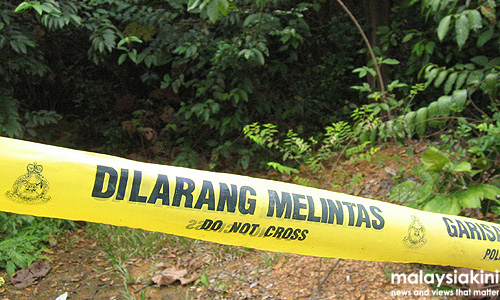 When citizens and visitors go missing or are killed, its alarming

It would be 300 days this month since the mysterious disappearance of a citizen of Malaysia who was only humbly doing his work for God's people.

Pastor Raymond Koh who was abducted on 13 February this year in broad daylight and in the vicinity of bustling Kelana Jaya has yet to be found, let alone if he is still alive or dead.

As caring, concerned and responsible citizens of Malaysia join the devastated pastor's wife and children in prayer, we have much to worry when citizens, responsible law-abiding individuals - and even visitors, go missing or are brutally murdered.

We will recall how to this day, we as a nation of people and good government have yet to know the reason and motive for the brutal unprecedented murder of a lone, fragile Mongolian citizen.

Altantuya Shaariibuu was blasted with explosives strapped to her body, allegedly by the government; uniformed employees. To this day, we do not know the motive. We do not know the current state and future fate of those with blood on their hands. And we certainly do not know the craftily hidden hands that could have orchestrated the murder.

We remember the late Kevin Morais who was murdered in what would have been a painful, gruesome killing. He was abducted, murdered and his body stuffed in a drum.

A casual search on the internet will reveal several more cases of people disappearing or killed under mysterious circumstances. Mind you, our nation is not in war. As asserted and reminded by our government of six decades, we are a progressive, peaceful and safe democracy.

But when you have street crimes on the rise to a tune of 57 percent increase within a year; when alleged criminals die in custody and under the vigilance of law keepers; when visitors go missing or as in the case of Altantuya annihilated; when ordinary citizens like Pastor Raymond Koh cannot be found after 300 days; when civil servants like Kevin Morais end up as fodder for plotters; when IS militants in other countries are found to be Malaysians - we Malaysians cannot be blamed for being alarmed.

As caring leaders, as concerned citizens, we must ask why. We have a stake in the safety and security and democracy of this nation by virtue of our patriotism to nation, king and citizens.

Above all, as a nation of people and government that believes we are a good, principled and progressively successful country where do we stand in so far as we witness these mystery crimes?

As a nation having Islam as our official religion while respecting the freedom and enabling the responsibility of non-Muslims to profess any other faith, should we not ask why all these crimes?

As Christians join hands in prayer in accompaniment of the family members of the 300th day of missing Pastor Koh, will all Malaysians and their respective leaders rise in solidarity to raise the bar in making our nation safer and more accountable?