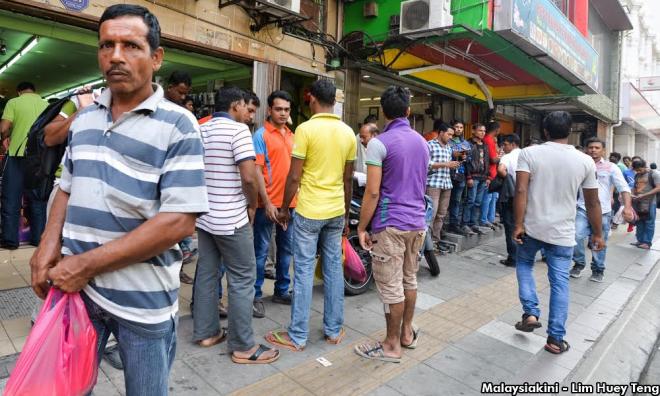 LETTER | The Home Ministry and the Immigration Department’s grace period until the end of June to employers to register all their migrant workers or face punitive action, will not address the basic issues of why a large number of migrant workers remain unregistered despite various previous attempts.

This problem has plagued the country since the first migrant workers arrived in the early 1990s. A good 30 years later, we still do not have effective policies in place or an employer/ migrant worker friendly system to register all the migrant workers that will earn maximum revenue to the government as well as control their numbers.

Instead, there is a totally ineffective, inconsistent and messy system that complicates and compounds the problem. The main reason for this is that the authorities do not want an easy and proper system, but prefer a messy one as it encourages corruption and abuse of power.

There are a large number of self-appointed agents who have been spawned by this problem-ridden system who prey on the helpless employers that do not meet the unnecessary conditions and restrictions imposed.

Despite large amount of money paid to the agents the migrant workers and their employers are in limbo. Most of the agents even work for large firms whose only objective is to register the workers of other employers to overcome the conditions imposed by the Immigration Department.

The workers are then registered under the company’s name and employers pay a large amount for this leeway. Needless to say, the employer will be at the company’s mercy when it comes to the renewal of the work permit.

The Immigration Department pretending not to be aware of this always says that agents should not be used, but any employer wanting to register his workers will know of the practical difficulties.

The long and rowdy queues and delays in registering the workers is a non-starter with employers. The government needs to simplify and make it easy to register the migrant workers in the various categories they are allowed to work in the country.

More Immigration Department and Human Resources Ministry offices should be allowed to register the workers. An appointment system can be introduced for flexibility to enable employers easy registration without waiting and delays.

Due to our problem ridden migrant worker registration process many Malaysian and migrant investors are seeking greener pastures, and the loser is the country not the Home Ministry or the Immigration Department officials who get their big salaries every month.

It is also not right that only the Home Ministry should be involved in the registration and recruitment of migrant workers, as giving too much power to the ministry has only led to large scale abuse of power.

The large number of migrant workers not registered and given work permits or working illegally is a big loss to the government in terms of revenue. New deadlines only cause stress and panic to employers who either have to close their business or rely on middlemen to find some way out of the problem.

Sufficient time should be allowed for registration to ensure that all sincere employers can register/legalise their workers. Only the agents, some immigration officials, enforcement personnel of local authorities, Rela, etc., benefit from this chaos.

Migrant workers have also fuelled big time corruption in the police. The police should not be allowed to check or detain migrant workers, who then bribe themselves out from the lock-ups.

Only the immigration authorities should be given the power to check the documents of migrant workers and arrest them and take them to the various camps for fines, imprisonment or deportation.

The illegal migrant workers problem has become so serious due to the main task of detaining migrant workers is being handled by the police. It is evident that the police have not done the job efficiently or effectively as can be seen by the millions of migrant workers without work permits and doing all kinds of jobs, as well as being involved in business and competing with Malaysian citizens.

If the government is serious about drastically reduce the undocumented workers without work permits, it has to do a comprehensive investigation into the problem. The June 30 deadline should be cancelled.

The government needs to come with a simplified process to register all the illegal and undocumented workers. An employer needs to only show the valid business registration document (SSM) to register the workers.

Particular situations and problems must also be taken into consideration: for example the Selangor government stopped issuing temporary occupation licence since 2008, and farmers and businesses have been affected by this as they cannot show legal land ownership thereby depriving them of legalised migrant workers.

Another bigger group that is affected is businesses without licences from local authorities. These small-timers have been operating for years if not decades and it is unfair to deny them migrant workers because they do not have a licence. It must be noted that these businesses employ a large number of illegal workers.

All kinds of other requirements like property titles, lease agreements, permits, licenses etc., are unnecessary as the primary aim should be to register the workers and collect the levy for the work permit.

The government can later proceed step by step to streamline and foolproof the work permit system anew as previous methods have totally failed.

Our new home minister should take a fresh look at this knotty problem. There should be a paradigm shift. It will be better if the home minister sets up a panel comprising of representatives from the Human Resources Ministry, employers, unions, police, immigration, NGOs campaigning for migrant workers’ rights, some of the embassies of countries where a large number of migrant workers come from, chambers of commerce etc. This panel must be given a major role in addressing the migrant workers problem.

If a proper system has come into place and if employers and the illegal workers still do not register, then it is only right that maximum punitive action be taken against them without any reprieve.

It does not augur well for the country’s leadership and image if it cannot overcome the recurrent migrant workers issue. The issue has become a social, economic, commercial and recently reputed to be a political problem when in reality they were supposed to be employed to do the 3D jobs in specific sectors only.