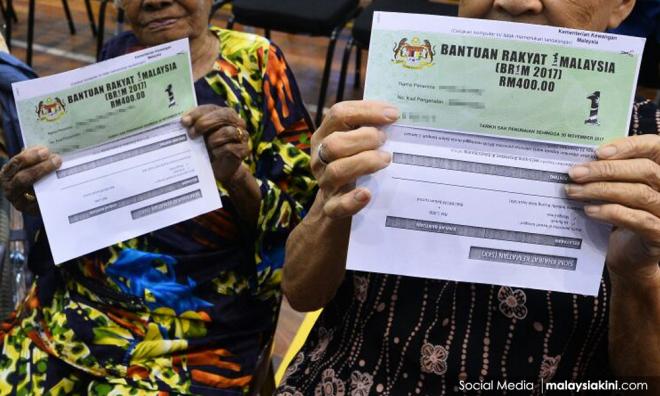 BR1M is not a bribe

LETTER | With due respect and deference to Prime Minister Dr Mahathir Mohamad, Economic Affairs Minister Azmin Ali and other Pakatan Harapan leaders, it is totally wrong to label 1Malaysia People’s Aid (BR1M) as a bribe.

If BR1M were a bribe, Harapan would not be in Putrajaya today. Harapan would possibly have come close to unseating BN but would not have been able to get the simple majority to form the government.

BR1M should be considered as an assistance scheme to help the B40 group overcome the increasing cost of living, and nothing more. The subsidy was started by former prime minister Abdullah Ahmad Badawi and later expanded as BR1M under his successor, Najib Abdul Razak.

It must be noted that even the poorest households paid more than RM 1,200 annually in the form of GST. Even BR1M is not enough to overcome the amount paid for the goods and services tax (GST) and the cost of living.

Since the cancellation of the GST, prices remain mostly unchanged and the effect of the new sales and service tax (SST) has yet to be seen.

Prices that go up in Malaysia seldom come down, and one should blame exploitative businesspeople for this. Only strict enforcement and severe penalties will deter excessive profiteering in retail outlets and  eateries.

Mahathir had also said in the past that BR1M was to bribe the people, but if he was so sure of this, why didn’t Harapan promise to cancel BR1M in its election manifesto as Harapan was against all forms of corruption?

It is a fallacy to regard Malaysia as a well-off country. Malaysia has one of the widest income disparities in the world despite the New Economic Policy and other socio-economic government programmes in the last 40 years.

In the private sector, salary schemes are heavily weighted in favour of top management and to a lesser extent on middle management, and the majority of lower-end workers do not receive wages befitting their  work or productivity. This explains the main reason for urban poverty.

The government, blind to reality, continues to harp on rural poverty when 90 percent of the poor now are urban-based. Azmin was quoted as saying that the government will improve income levels for the poor to offset BR1M. How is he going to alleviate urban poverty in the short term?

The B40 in the urban areas are mainly working in factories and offices and are dependent on salaries and wages. Can the salaries be quickly increased to higher levels by the employers?

Therefore, how is Azmin going to help the poor if BR1M is possibly cancelled next year? BR1M at least helps to partially offset the price increases which appear to be out of the government’s control.

Unlike the urban sector, the rural sector income depends more on agriculture and other industries where productivity can be increased through aid for better farming methods, fertilisers and higher prices for the farm produce. It is therefore easier to raise income levels in the rural sector but it is difficult to do likewise in the urban areas.

Senior citizens too are very much dependent on BR1M  and their plight needs to be considered. Unlike pensioners and working adults, they have to sustain themselves on their limited resources, and BR1M is a boon to them.

Harapan leaders need to take note that those receiving the RM 1,200 annual BR1M handouts lost an additional RM 800 by voting for Harapan. Those receiving RM 900 and RM450 also lost their increments which Najib had promised in his pre-election campaign.

If  BR1M was regarded as a bribe, there was not a ghost of a chance Harapan could have won the 14th general election, bearing in mind that there were seven million BR1M recipients this year. Furthermore, there were two more payments to be made in June and August this year after the May 9 election was over.

The people voted for various reasons, and BR1M being an inducement was not a major influence on the electorate.

It is also said that some of the rich have also availed themselves of BR1M. I find that hard to believe. As a  community activist, I have helped hundreds of people to apply for BR1M over the years, and I feel that some really deserving cases do not get the aid due to the rigid conditions.

The BR1M payment is based on the information given in the application form and records in the internal revenue department, banks, Registrar of Companies et cetera. I have come across letters warning married couples to apply individually in the hope of separate payments. A few rich persons probably escape the net and get their undeserved BR1M. It is no point penalising the 99 percent for the deception of a few.

There is also a lot of hype about the trillion-plus ringgit debt and it has been cited as one of the reasons to stop BR1M. To be fair, the trillion ringgit debt is not of Najib’s making alone as the loans and borrowings have been accumulating since Merdeka.

During better economic times under Mahathir, Badawi and Najib, the debts should have been reduced. Why was it not done especially when some exports like petroleum, palm oil, electrical and electronic products were experiencing a windfall in revenue in the boom years?

Stopping BR1M will prove to be highly unpopular as about seven million people receive it. PAS and BN too have appealed for the aid scheme to be continued, as have some Harapan leaders.

If BR1M is cancelled, it will be to the detriment of Harapan, and in the next general election, BN could make a promise to restore and even increase the BR1M amount in its election manifesto.

If this happens, then like what Mahathir and Azmin have said, it could really become a bribe and Harapan can kiss Putrajaya goodbye.