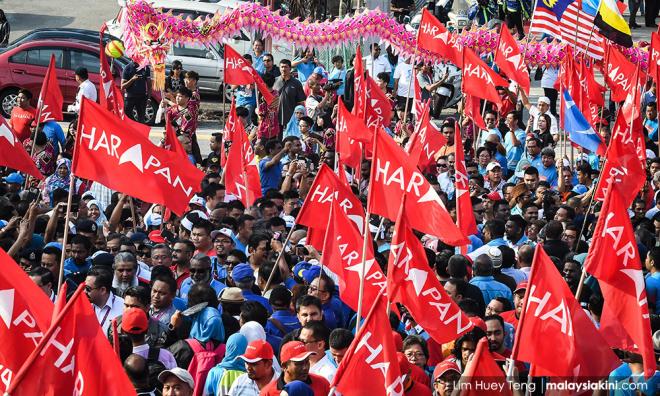 Pakatan Harapan, please get your omph back

LETTER | If we accept freedom of speech and opinion, does this mean we have no right to challenge or tell off people who promote toxic, parochial, archaic and stupid ideas? When we respect others’ opinions, does this mean we can’t have strong opinions of our own?

I believe this was what most people voted for on May 9 – we want a new paradigm, not the same old baloney that has been hawked around for more than half a century by the previous government, including the one led by Dr Mahathir Mohamad when he was prime minister the first time.

We wanted a new start after May 9. Our new-old PM went to the United Nations and declared many things there. We also have manifestos and new policies proclaimed that are people- and national centric. We want a more benign and equalitarian society for all. We want the fruits of development more equitably shared among the people.

Barely a year, we are seeing the new government being overwhelmed by stupid ideas and opinions that have strangled this nation for decades.

Why must the new government acquiesce to demands by people who have failed us all this while? What have these people given us if not a crippled nation saddled with strife, corruption and inequity?

So, what if they had held one big demonstration against the government. I am sure there will be many more. The most important thing is for the new government to stand firm and counter those defunct ideas with policies of its own.

Why is the new government so afraid? Did it not come into power legitimately and with full mandate? Why worry unnecessarily about certain communities not supporting Harapan enthusiastically? Why, is Harapan not satisfied with its present supporters?

Why has Harapan become so docile, unable or so afraid to forcefully defend the new government’s raison d'être? Toxic ideas, if go unchallenged, will become mainstream, period.

When stupid people were in power, they played race, religion and other parochial cards to the hilt. Now they are out of power, but the tactics they used have continued unabated. May I know where has Harapan’s influencing and educational roles gone to? If toxic ideas are being hawked around, it is the job of Harapan to neutralise them, not to tacitly condone them.

Sometimes, I just don’t understand the baloney: we now have people with toxic and stupid ideas “gatecrashing” to join Harapan and yet Harapan is accepting them together with their ideas.

Pakatan Harapan, please wake up from your slumber. You guys are not doing that great.