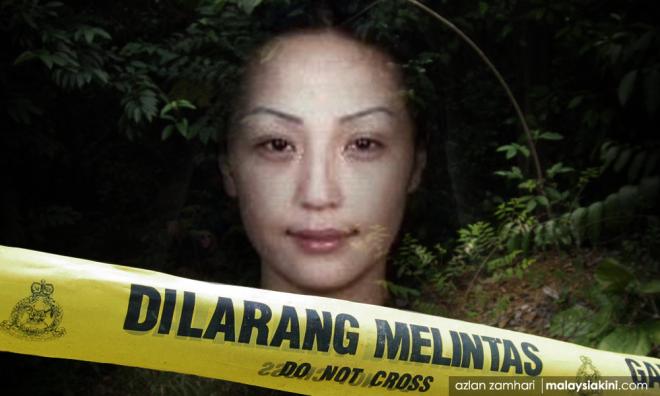 LETTER | Madpet (Malaysians Against Death Penalty and Torture) is saddened by the delay in the abolition of the death penalty, which would also most likely delay justice in the case of Altantuya Shaariibuu, the Mongolian mother of two. She was murdered and her body was blown up in a forest with explosives in 2006.

Sirul Azhar Umar and Azilah Hadri, who were serving as then deputy prime minister Najib Abdul Razak’s personal security detail at the time of the murder, were arrested and convicted for the murder by the High Court.

In 2013, the Court of Appeal overturned the convictions and both were released. Thereafter, the Federal Court in January 2015 allowed the appeal by the prosecution, and the murder conviction and death sentence was restored. Murder carries the mandatory death penalty.

A co-accused, former political analyst Abdul Razak Baginda, a confidant of Najib, was acquitted in 2008 without his defence being called to the charge of abetting Azilah and Sirul. The prosecution did not appeal the acquittal.

Najib, at the time of the murder was the deputy prime minister, and in March 2009 he became the prime minister until the last general election in May 2018, that saw the defeat of Umno-BN, and formation of a new alternative Pakatan Harapan government.

Sirul, after his release by the Court of Appeal left for Australia, and he did not turn up for the hearing at the Federal Court, that again sentenced him to death. Since 2015, he has been detained at the Immigration and Border Protection Department’s facility in Sydney.

In 2015, Sirul was reported by Malaysiakini as saying, "I was under orders. The important people with motive (to commit murder) are still free."

This raised serious doubts that the person, or persons who ordered the killing of Altantuya or paid for it may still be at large. Australia, which is an abolitionist state, would not send Sirul back to Malaysia, knowing that he may be hanged if he is sent back to Malaysia.

It is now good that the current Malaysian cabinet has decided to abolish the death penalty, and all that needs to be done is the passing of bills in Parliament that will abolish the death penalty, and hopefully also result in the death sentence of all those on death row being commuted. This would enable Sirul to be brought back to Malaysia, and his evidence which may be vital for the successful prosecution of any other remaining perpetrators will finally happen.

In the recent United Nations General Assembly resolution calling for the moratorium of executions pending the abolition of the death penalty, Malaysia,  voted in favour of the resolution for the very first time in line with the new government’s declared position.

The Altantuya case has also made us aware that there may be many others who have ordered or paid for some other to commit murder who may still be out there free, and as such justice is not yet fully achieved. All these other persons who ordered or paid for such murders should also be identified, prosecuted, convicted and sentenced.

In any criminal trial, it is of no use for a person who was involved in the commission of the crime to confess or plead guilty. Most will exercise their right to silence until all appeals are exhausted.

These persons may also be subject to threats against themselves and their family members by those who ordered or paid them to kill. Those who admit they killed because they were paid to kill are still guilty of murder – so there is little reason to speak up and identify other accomplices who are yet to be identified and/or prosecuted.

When the death penalty is abolished, and better still any mandatory life prison sentence, the courts will then have the ability to impose a lower prison term on any or all who co-operated in making sure all others involved are also identified and prosecuted. This would be another mitigating factor that the courts can consider, but always ensuring that a just sentence is imposed.

The abolition of the death penalty is needed to prevent the ‘innocent’ from being wrongly killed, as there is always the risk of miscarriage of justice, which could be due to lawyers, prosecutors, police, judges, court procedures and many other factors.

It has been shown in Malaysia, that the death penalty, even if mandatory, does not deter crime.

Further, it is against religious values, even Islam, as the death penalty in Malaysia is not provided for in Islamic laws but civil laws, and the trial does not comply with Islamic evidential and procedural requirements.

Note, that in Islam, even for murder, execution is a possibility as there is ‘diyat’(diya), where compensation and forgiveness from a victim’s family can save a murderer from death – this highlights that repentance or forgiveness from victims is important, not simply punishment if you commit a crime.

In Malaysia, for a long time, the lack of political will and strength on the part of the government despite the global trend towards abolition may have kept the death penalty in our law books.

The fear of the government to do the right and just thing simply because of a fear of a possible loss of political support is pathetic. Hopefully, this new Pakatan Harapan, unlike its predecessor, will not weaken and backtrack on its decision to abolish the death penalty.

It is sad that some have been calling for the retention of the death penalty, who may simply be those who are unaware of the just reasons for abolition. They may simply be opposing it because this was the decision of the current government, and as such be merely a political strategy rather than one based on justice or values.

They may also be people who fail to also appreciate the sufferings of the children and families, simply because a parent or sibling is executed. They fail to appreciate that even the mandatory death penalty has failed to reduce murder or drug trafficking in Malaysia.