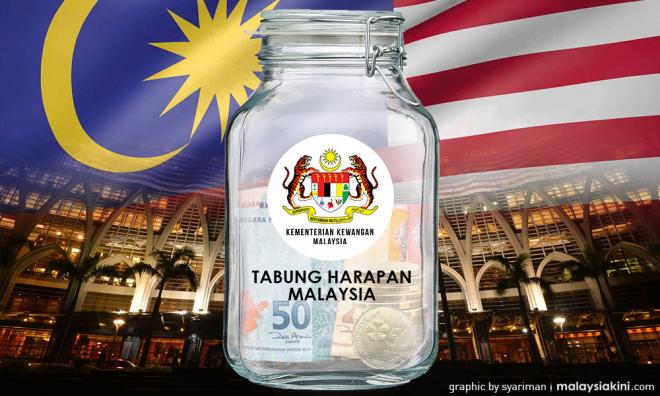 Why not use Tabung Harapan to create B40 endowment fund?

LETTER | The historic results of the 14th Malaysian general election saw the rise of the Malaysian people who were fed up with kleptocracy and mismanagement of the country and its funds. The BN regime which had been in power for more than six decades finally fell and was replaced by the Pakatan Harapan coalition.

However, with the hope for a better future came the monumental task of managing the country’s debts, which was revealed to be in excess of RM1 trillion – RM687 billion coming from federal government debt, while more than RM400 billion coming from government guarantees and Public-Private Partnership (PPP) lease payments.

Upon hearing this news, and with the spirit of Malaysia baharu still burning within, many individuals and organisations expressed their desire to contribute to help ease the governments’ financial burden.

To accommodate this, the Tabung Harapan Malaysia (THM) was formed to cater for the contributions. Money came pouring in as individuals and organisations donated their money with the noble intention of helping the country. Generous Malaysians contributed more than RM200 million to THM, which was closed in January this year.

Recently, the finance minister announced that the THM account is currently being audited by the auditor-general, and an Accounts Committee, chaired by the Treasury secretary-general, will decide on the usage of the funds in accordance with the THM trust deed.

During its inception, it was implied that the purpose of the funds collected by THM was to help repay government debt. Although this may come with the best of intentions, it may not be the best course of action and outcome that can be obtained from the usage of these funds.

Instead, the funds from THM can be turned into a trust endowment, which focuses on funding socially impactful programmes addressing the issues of the B40.

Recent reports by Khazanah Research Institute and the World Bank show that income inequality between the T20 and B40 has worsened, whereby an average B40 household only has a mere RM76 a month to spare, after household expenses are deducted. Compounded with the increasing cost of living, there are many challenges facing the B40, which should be given priority by the government.

We can no longer rely on “band-aid” solutions such as cash transfers and subsidies but longer-term solutions for the vulnerable households. Hence the funds from Tabung Harapan should be used in a more impactful manner by investing in human capital, instead of just paying off a small amount of interest arising from government debt.

This can be done through establishing a trust foundation managed by an experienced and professionally-run organisation. Under this trust foundation, the RM200 million collected should not be spent immediately on B40 programmes. Rather, the funds should be invested so that the returns on the capital investments can be used to fund socially impactful programmes for the B40.

For example, let’s take a conservative figure of 5 percent returns on investment from the RM200 million – this amounts to RM10 million every year, of which RM8 million can be used to fund the social impact programmes for the B40, while the remaining can be put back into the fund for compound returns.

It may seem like a measly sum as compared to the RM200 million which can be immediately be spent, but it can bring about more sustainable and impactful effects in the long run. This also ensures that the operations of the foundation can be self-sustaining and allows for continuous impact on future generations.

Instead of handouts, a majority of the funds should be used for long-term impactful purposes such as training programmes and soft loans to assist entrepreneurial businesses. The foundation can work with existing government agencies and social NGOs on enhancing effective programmes which have shown evidence of success.

A portion of the funds can also be used for early intervention programmes which have the potential to change the trajectory of a person’s life at a very early stage. This will enable significant cost savings and/or revenue increases for society in the long run. In doing so, the impact of the programmes should be measured, tracked, and published for further improvements.

There are many best practices that can be referred to which implement such mechanisms such as social impact bonds (SIB) around the world.

SIB programmes range from workforce development, housing for homelessness, child and family welfare, to early childhood education, poverty eradication, and environment. SIBs have shown significant evidence of success and can be emulated to address B40 issues in Malaysia.

For Muslims, the suggested establishment of this trust foundation is similar to a cash waqf structure, but with fewer restrictions and legal issues crossing state boundaries.

Waqf, which literally translates to ‘endowment’, is a long-standing Islamic tradition. It refers to the dedication of valuable assets – land, a building, or even money – such that it no longer belongs to anybody and cannot be bought or sold. Rather, the assets are to be held in trust and the profits which are then generated from this endowment are used for charitable purposes.

With the establishment of a foundation managing the endowment fund for the B40, the THM account can be reopened indefinitely for any further donations and grants that can contribute towards the capital of this endowment. Companies and organisations can contribute to this fund through their yearly corporate social responsibility grants and donations that can be beneficial for their tax strategies.

To ensure accountability, quarterly reporting of the foundations’ activities should be done transparently and adequately to the public. The report should include an account of the usage of funds as well the social impact of the programmes. The government can assign prominent NGO leaders as trustees and appoint independent, credible and professional people to run the foundation.

The proposal may seem idealistic but can be realised with political will. As they say, if there is a will, there is a way. Hopefully, the committee and the Finance Ministry can consider this endowment fund proposal to obtain more sustainable impact in fulfilling the people’s wishes to develop a benevolent country. Penuhi harapan, bina negara.

SYED MARWAN MUJAHID SYED AZMAN is head of research of the Institute for Research and Development of Policy (IRDP) and an assistant professor at International Islamic University Malaysia’s (IIUM) Institute of Islamic Banking and Finance. He can be contacted at [email protected] and [email protected].