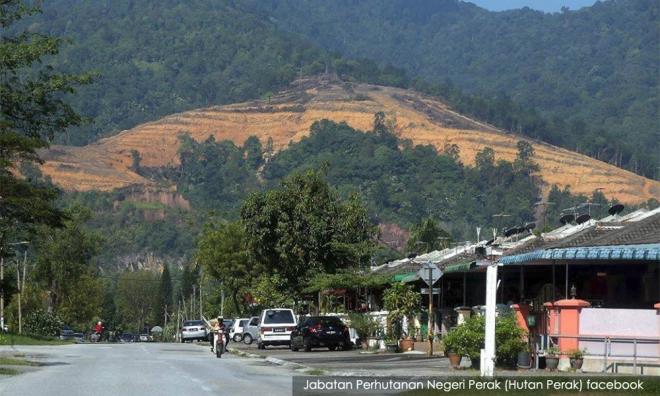 We need to save our disappearing forests

LETTER | Many Ipoh folk like me take our hills and forests for granted. We seldom stop to ‘stand and stare’, to take in the beauty of these majestic green sentinels that form the natural backdrop to our homes and city.

We paid for this nonchalance when during the Chinese New Year break this year, a huge 10ha patch of forest was mysteriously shaved off Kledang Hill. Heavy machinery had been used to clear the hill slope, and oil palm seedlings planted.

The swiftness with which all this happened was startling, but what was more shocking was that it had apparently escaped the notice of all the relevant enforcement bodies.

When civil society demanded answers, the Perak state government and MB Inc, which owned part of the land, declared the clearing of the forest illegal and outside their knowledge. To date however, the culprit has not been brought to book despite police reports by the public.

Many other disturbing truths then began to emerge. Among others, we learnt with dismay that the state government itself had plans for a housing project on the Bukit Kledang hill slope even before this ‘illegal’ clearing was done.

Is Perak so desperately short of flat land that we need to fell a forest on a hill slope to build houses? And housing for whom? It definitely can’t be for the B40 who face an acute shortage of affordable housing.

Under pressure from an indignant public, the state government gave the assurance that they were abandoning the housing project, and that the slope will be reforested and restored to its former status.

Then, about this time, a letter from the Ipoh Forestry Department awarding 400ha of forest in two forest reserves – Hutan Simpan Kledang Saiong and Hutan Simpan Bukit Kinta – to a newly set up RM2 company for a forest plantation project, was leaked to the public.

Such development apparently is permitted in a degraded or secondary forest; so it would appear that the justification for allowing forest plantations in these two forest reserves was that the designated areas were degraded forest or ‘hutan miskin.’

But images captured by a drone revealed pristine primary jungle.

We also found Orang Asli villages, some lying close to the areas earmarked for development, and several others further away. These communities were unaware of the plantation forest development plan despite there being a requirement to first consult and get the agreement of the Orang Asli communities in the project area before approval is granted.

Plantation forest development in a forest entails the clear felling of trees and their removal, and the planting of a single crop, such as rubber or timber, which will considerably alter the ecosystem.

Replacement of a natural forest with a single crop plantation would also have a major, life-altering impact on Orang Asli communities by destroying their food sources and foraging grounds, contaminating their water sources, and dispossessing them of their ancestral lands.

Apart from all these, is the failure to heed the declaration of Lembah Kinta, a 2000 sq km area spanning the districts of Kinta and Kampar as a National Geopark by the Perak government in October 2018.

Sustainable development, preservation and conservation, protection and rehabilitation are key concepts associated with a geopark.

However, the destruction of the Kledang Hill forest, the government’s earlier plans for a housing project on the hill slope and the plans to convert forest reserves into plantation forests in Bukit Kinta and Kledang Saiong forest reserves all clearly run counter to and undermine the geopark declaration.

May 2018 saw a new state government that has unfortunately continued the natural forest destruction legacy of its predecessor by signing away forest reserves for various kinds of “development”.

All these reflect how vulnerable our forests are, and the wildlife, fauna and flora therein – and inevitably, the Orang Asli whose lives are inextricably tied up with the health of our forest reserves.

Although there are rules related to sustainable logging, replacement of forests converted for development, consultation with Orang Asli when planning development of forests, among others, it is clear that these do not guarantee the protection of our forests.

Our current legislation also has serious shortcomings. Classification as a forest reserve is no protection against logging or development, as the chief minister has the power to excise land from permanent reserved forests.

How informed, environmentally conscious, impartial and forward thinking are our leaders to make sound decisions about our forests? How does one explain the government’s decision that the unlogged pristine forests of Bukit Kinta merited conversion of land use?

State governments often cite the need to exploit forests for timber as an important source of revenue for the state. But where is the balance between exploitation and preservation?

And for how long do we continue to look to our primary forests for revenue now that less than 16 percent of Malaysia’s total land area is natural, unlogged forest? Isn’t it time our forest policies tended towards preservation?

It is high time the federal government introduced a “forest grant” that is paid out to state governments each year based on the acreage of unlogged forest in that state.

And it is high time for society to play a bigger role and demand a bigger say if we want to preserve our forests for posterity.

We need to press for the establishment of an independent watchdog committee with members from the public, environmental groups and the Orang Asli community, with the power to veto plans to further log our forests.

The fate of our forests cannot be left in the hands of the government alone so long as our five-years-once vote, is taken as a mandate for all policies, and business interests outweigh other considerations.

RANI RASIAH is a central committee member of PSM.