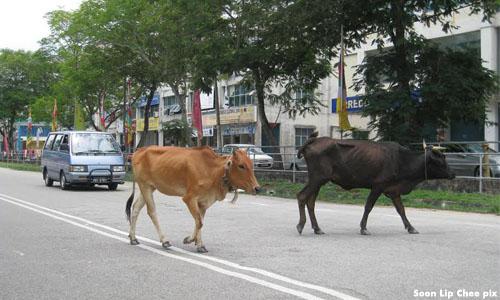 NFC - what a bull

Maybe it is coincidental, but I don't buy it. For the record, I was the first to publicly analyse and write four different articles about NFC in my blog ("What a bull").

Today Khairuddin Abu Hassan and Mohd Salleh Ismail, the owner of NFC, publicly announced that there is a party that is willing to pay off the NFC debt (around RM250million) and take over the NFC. Khairuddin is questioning the Finance Ministry's wisdom in not accepting the deal while Salleh is questioning why the attorney-general wants to sue him and all the directors (which are his children).

Firstly, who would want to pay RM250 million and take over NFC? I would assume that the new entity may want to borrow back the RM250 million at a 3% interest rate from the Finance Ministry with the aim of running the NFC. Any smart businessperson that is familiar with the livestock industry will know that it is not viable to run NFC under its current model.

The only people that think that they can make money are politicians and their merry men. Perhaps it is no coincidence that Daim has been visiting dairy farms around the country lately. When politicians are offering a solution, it's best to be cautious.

I think the Finance Ministry's decision to not rush into the matter is a smart move. My question is, why is Khairuddin pushing the matter publicly? He should let the ministry do detailed due diligence before deciding.

On the other side, Salleh of the NFC says that there is a party that willing to pay the NFC debt including interest. Wow! Suddenly there are several rich tycoons in this country with RM250 million to spare. What's the probability that the money comes from the same source? An interesting twist of events.

What are they all going after actually? No businessperson is willing to spend RM250 million without any clear return on investment. They would at least expect a return of more than what is offered by their existing investment vehicle. So what is the honey in this deal? The land or the contract to supply beef to the country.

The land is not fertile and would cost a lot of money to rehabilitate. At the moment only Acacia trees are growing nicely. Maybe they would want to supply Acacia timber to the factory that makes toothpicks and matches. The only human population there are the people from the nearby kampung and Syed Sirajuddin army camp. Property development may not be attractive today but it may be in the future if they can change the land use condition.

So what is the juice then? My theory is that a group of people who have never pulled a cow is interested in getting a fresh loan to recycle the NFC project with slight modifications. The repayment is likely to be given with strings attached.

Having a fair bit of knowledge and past experience in the industry, I suggest the government spread its risk by sharing the recovered RM250 million loan with 500 established dairy farmers nationwide to expand their farms. Give it as a loan. Make sure it goes to small farmers with existing livestock and not new farmers who want to try out this industry.

They would be able to produce milk for the country and produce enough calves to generate the next several cycles of beef production. The amount of RM250 million would buy 31,250 pregnant heifers of a good crossbreed. By the end of the first two quarters, there will be 31,250 calves and these calves will mature either as bulls or as heifers to reproduce again.

As for Salleh and the AG, he must appreciate that there are two cases involved here against him. One is the loan recovery and the second is criminal breach of trust (CBT). I hope the AG will do the right thing and that the finance and agriculture ministries will not repeat past mistake now being pushed under a new cloak but with the same mentality.