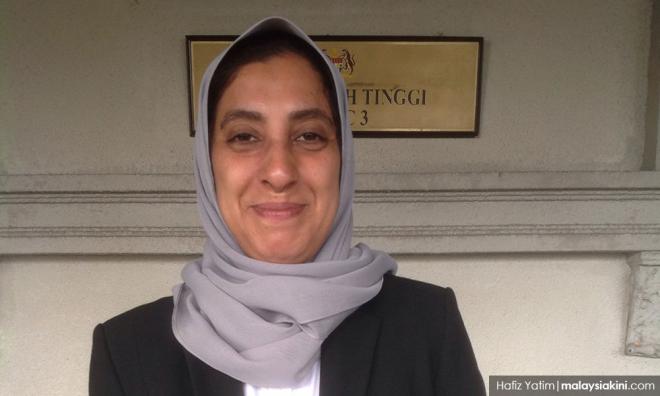 LETTER | On Aug 1, 2015, I texted Latheefa Koya to inform her that I had been arrested and would be detained at Jinjang Police Lockup. This was in the aftermath of the “Tangkap Najib” rally at Sogo, Kuala Lumpur. Latheefa Koya simply replied, noted and help is on its way.

The next thing we knew, there were boxes of nasi goreng delivered to us by our lawyers. Since then, we called it "Nasi Goreng Latheefa Koya" each time any of us was arrested. All of us secured legal representation during the remand proceeding the next day, and soon enough, all of us got out of the lockup.

On June 1, 2019, Latheefa was appointed as the chief commissioner of the MACC. The appointment is not without controversy as it draws both support and criticism. There is definitely a lot of interest revolving around her appointment as the top person to combat corruption in a country seeking to repaint itself on the world map in the effort to battle corruption.

The task ahead for Latheefa is not an easy one, as the country has, in recent years, come across the biggest corruption scandal since independence, which is the 1MDB scandal. While that case is only the tip of the iceberg, there will be many challenges for her to investigate impartially, against other allegations of corruption involving politicians from the old regime as well as the new one.

Her appointment reminds me of the Hong Kong movie "I Corrupt All Cops (ICAC)", which tells us about the struggle faced by the reform efforts to combat corruption in Hong Kong in the 1970s, which led to the formation of the anti-corruption effort in Hong Kong.

What is certain is that the head of the organisation will definitely face difficulties. What she is facing recently regarding her appointment is the first among those challenges.

Concerns have been raised about the appointment of Latheefa as the chief commissioner of the MACC by both politicians and civil society group - and correctly so, as the appointment was not in line with Pakatan Harapan's promises in their manifesto and reform agenda, as Latheefa formerly belongs to a political party, PKR, thus leaving questions about her impartiality when exercising her duties as MACC chief.

However, anyone who follows Malaysian politics would be familiar with the infighting within PKR, and it is evident from their recent party elections. In one corner there is Kartel, which is affiliated with PKR deputy president Azmin Ali, and another corner is Istana Segambut, PKR president Anwar Ibrahim's camp.

The first to raise concerns wasn’t a civil society group or the Malaysian Bar, a statutory body for lawyers in Peninsular Malaysia (who have a serious obsession with Malaysian politics). It was the PKR leaders from the Istana Segambut camp who raised concerns about Latheefa Koya.

I personally believe she is the right person for the job, as she is known for her fierce and confrontational methods against abuse of power by the state throughout her career as a lawyer and political figure. She should not fall victim to the politics of Istana Segambut, and be allowed to serve her tenure without fear or favour.

The call for her resignation is just another plot to tip the scale of power within PKR and is therefore unwarranted. The ongoing battle between Kartel and Istana Segambut does not benefit the ordinary rakyat on the street, and the performance of the Harapan administration in the past year is well below public expectation of them.

My personal experience dealing with Latheefa has enabled me to personally vouch for her to do well in her new appointment. I first came across Latheefa back in 2013 when she was assisting stateless citizens to register for blue MyKads at the Penang State National Registration Department on Anson Road.

Latheefa, being herself, single-handedly scolded her way into the building when officers prevented the poor children from submitting their registration forms. I played my part to help those there fill in their forms, and this was my initial exposure to activism and politics before I became a student activist back in my undergraduate days in Universiti Malaya.

Even we were not spared from her scolding when we kept quiet on issues on which we were supposed to speak out during the time of the sedition crackdown against activists back in 2014.

The appointment of a strong figure to combat corruption sends a message to everyone, especially those who are corrupted. Only those who are corrupted and have something to hide should fear the name of Latheefa Koya. Otherwise, support should be given to her, regardless of political affiliation. It has been known that she has resigned from all her positions in PKR to assume her new role, and this was rightly done.

Acknowledging the mammoth task ahead of Latheefa, we should offer her support when she needs it the most. Her track record speaks for itself as a human rights lawyer, and unless those who do not agree with her appointment can offer a better candidate, I can see no reason to call for her resignation. Criticism which is not constructive plays no role in nation-building.

I write this piece in hope that the readers will support her during her tenure in battling corruption, and I personally believe Latheefa will do us proud by showing her capability to catch big fishes without fear or favour, justifying her appointment.

VINCE TAN HOO SEH is a postgraduate student at the Faculty of Law, University of Malaya and is currently a practising lawyer in Kuala Lumpur.