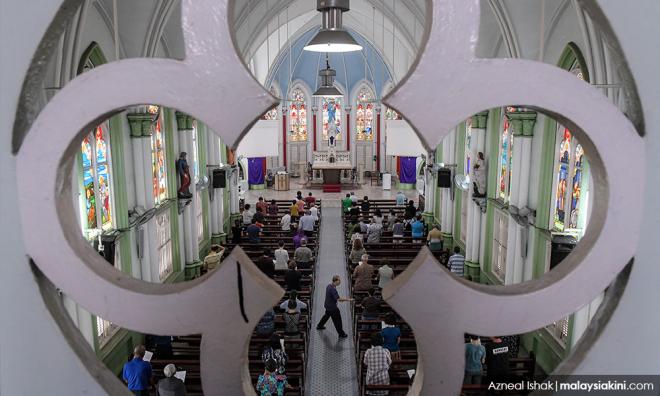 LETTER | This stand of the Attorney-General’s Chambers (AGC) is totally in line with the present law. Non-Muslim places of worship are legally established under Article 11 of the Federal Constitution.

The Constitution, under Article 11, imposes no condition for non-Muslim places of worship to be registered and therefore, they are not required to form a legal association.

At present, non-Muslim places of worship operate as follows:

i) Most churches are registered under the Act of Parliament (such as the Catholic church, Methodist and Anglican churches);

ii) There are some non-Muslim places of worship registered with ROS;

iii) Some are registered with the Registrar of Companies;

v) Some are functioning under trusts established by High Court orders;

vi) Some are registered with the Inland Revenue Board;

vii) Some are registered with the Prime Minister's Department as a trust.

A meeting was held on Sept 4, 2015, on non-Islamic houses of worship, which was attended by representatives from the Federal Territories Minister, Land and Mines Department, Registrar of Societies (ROS) Selangor, ROS headquarters, Selangor office of the Attorney-General’s Chambers and Malaysian Consultative Council of Buddhism, Christianity, Hinduism, Sikhism and Taoism (MCCBCHST) representatives.

The dissenting view of former Court of Appeal judge Varghese George in this matter is not legally supported. His reference to some ROS letters in 2004 on which he relied on is not law.

There was an effort in 2014 by the ROS to require the non-Muslim places of worship in Wilayah Persekutuan to register. The MCCBCHST opposed this as being unconstitutional.

It thus resulted in the meeting on Sept 4, 2015, where ROS officers conceded that, legally, there was no requirement for non-Muslim places of worship to be registered.

The Societies Act 1966 only applies to the registration of societies. These societies do not come under the protection of Article 11 of the Federal Constitution and thus need to register.

No mosque has been registered with ROS. Does it mean they too must register? Moreover, as shown above, there are at the moment at least seven categories under which the non-Muslim places of worship function, all legally.

Article 11 is the supreme law of the land. As per Clause 11(3), every religious group has the right to:

(a) Manage their own religious affairs – that is, not to be dictated to by any other body;

(b) To establish and maintain institutions for religious or charitable purposes; and

(c) To acquire and own property.

There is no requirement for any registration before they can be legally constituted.

JAGIR SINGH is vice-president of the Malaysian Consultative Council of Buddhism Christianity, Hinduism, Sikhism and Taoism (MCCBCHST) and also chairperson of its legal panel.