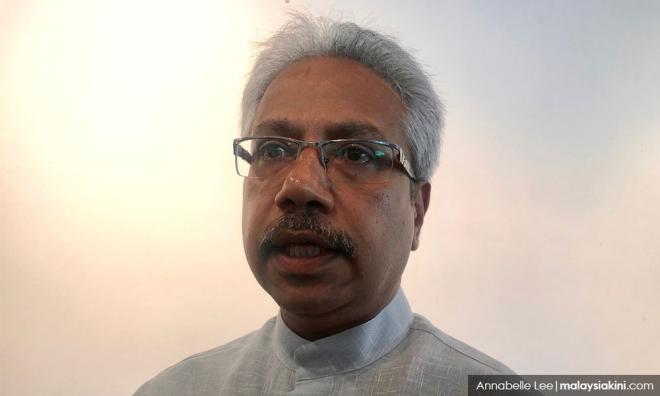 Answers please, Minister, on how Mitra funds are being distributed

LETTER | Minister in the Prime Minister Department, Waythamoorthy (above) is worked up when people question the disbursement of the RM100 million ringgit Mitra fund.

The matter is of public interest. Anyone, including the Opposition, has every right to question the way the money is being distributed. When the Najib administration distributed Sedic funds, like a political fund, we made noise. If the Minister expect us to let it go now, because he’s part of the Pakatan Harapan government, he’s wrong. The accountability matters now, more than ever.

Now, the fund may not be used as a political tool, but the way the fund is being distributed has raised many eyebrows.

According to the auditor general report, which was tabled in Parliament recently, Sedic funds went through a few processes, including a selection committee comprising former cabinet minister and deputy ministers. Final approval was by the former Prime Minister. There were multiple discrepancies, fund mismanagement cited by the auditor general in the report.

Now, everything is a mystery as to how the recipients of the funds are selected. Is the minister selecting them? Or are the civil servants in Mitra selecting them? This is a question raised by many, including Pakatan Harapan elected representatives.

Since the formation of the committee, there has been monthly meetings, where we discussed issues pertaining to the community, and steps taken to fulfil the GE14 manifesto promises for the Indian community.

The council even visited the Prime Minister and highlighted certain issues that needed immediate action from government. The council has also approached various ministries, like the Home Ministry, Education Ministry, Human Resources Ministry, Youth and Sports Ministry and others for various issues pertaining to the community.

Waythamoorthy is well aware of this committee, and only attended two meetings of the committee. Despite differences in opinion, different party background, we managed to get together for one cause - to get things for the community that had been neglected in half a century of BN rule.

Since the last meeting he attended in Putrajaya, the committee members have been asking for an update on Mitra funding and how it is being channeled. We just want the report to be tabled in the meeting, for us to understand the process, and to give our views.

But Mitra, a body supposed to uplift the Indians in Malaysia, refused to address the call by the Indian elected reps council. I’m not sure if the order to avoid meeting the IAAC came from the Minister’s office. But it’s irresponsible to avoid the meeting on purpose.

Now, when we scrutinise the list provided by the Minister in Parliament, we find some unqualified programmes, unqualified organizations have received funds. What justified these organizations getting funds is a mystery.

Let me give an example of such questionable funding. An organization was given RM250,000 by Mitra to organise a science fair for Tamil schools. That particular organization went on to get other sponsorships for the programme, and held its science fair a few days ago.

What’s the point of Mitra allocating a quarter of a million ringgit for such a science fair, if the schools still have to spend their own money? Did Mitra monitor the programme, and scrutinise the financial aspects of the programme? We want concerns like these to be addressed. But, Waythamoorthy not only failed to attend the meetings, but is apparently undermining the council that comprise Pakatan Harapan lawmakers.

Maybe the Minister has a feeling that the IAAC's role is to question him. In fact, the council was formed before he became a Minister. The council’s role is to engage various ministries and agencies in order to get Pakatan Harapan's manifesto for Indians fulfilled. If Waythamoorthy thinks the council meeting is a waste of time for him to attend, he should state it openly. Then, the lawmakers in the council will know what to do.

If Mitra ends up like Sedic, it is all of us, the Indian leaders in Pakatan Harapan, who are going to be blamed. Hence, we all have a responsibility to ensure the organization is managed properly.

The RM100 million given to Mitra doesn’t belongs to Waythamoorthy or his officers. That money belongs to the Indian community, and he has to answer all the queries about the fund. To say details of the fund disbursement are transparently published in a website is not sufficient. The Minister should understand accountability matters too.

SATEES MUNIANDY is the state assemblyman for Bagan Dalam, Penang.