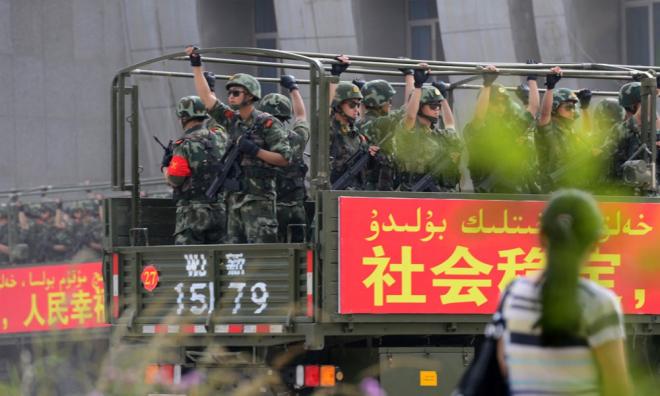 Treatment of Uyghurs in Xinjiang nothing short of cultural genocide

LETTER | As the president of the Uyghur American Association, it is my duty to refute the inaccurate claims published by so-called Uyghur intellectuals in a letter in the Global Times on July 19.

I stand by US Secretary of State Mike Pompeo’s assessment that the Chinese government’s treatment of Uyghurs of other Muslim ethnic minorities in the Xinjiang Autonomous Region is “the stain of the century.”

The treatment of Uyghurs and other Muslim ethnic minorities in Xinjiang is tantamount to cultural genocide and crimes against humanity.

I must denounce this letter’s comparison of Xinjiang’s police state to the environment in the United States after the 9/11 terrorist attacks in New York.

The purpose of vocational education camps in Xinjiang is not to quell terrorism. As a peaceful religion, and there is nothing inherently extremist about practising Islam.

Instead, China is abusing the tragedy of the 9/11 terrorist attacks to promote the despicable, Islamophobic stereotype that Muslims are extremists. They are using this false narrative as an excuse to target and oppress their own people.

Ambassador Nathan Sales, the US State Department Coordinator for Counter-terrorism, has also denounced China’s claim that the purpose of vocational training camps in Xinjiang is to combat terrorism or religious extremism.

As Sales has pointed out, the scope of the internment system in Xinjiang is “so vast and so untargeted” that it has nothing to do with combating terrorism.

Instead, the vast network of camps is designed to systematically oppress Uyghur people and break them from their roots, culture, language, and religion.

We ask of these so-called Uyghur intellectuals: do you believe that 1.5 million or more of your brothers and sisters harbour thoughts of religious extremism and deserve to be arbitrarily detained?

Sales succinctly captures the purpose of these camps. “It’s repression, plain and simple.”

The authors of this letter believe there is a greater sense of “fulfilment” and “happiness” in Xinjiang. This could not be further from the truth.

Xinjiang is not socially stable, but is rather a gruelling police state, where every behaviour is monitored.

Those detained within the camps suffer, while those who aren’t are forced to live in an open-air prison. For Uyghurs and other Muslim ethnic minorities, there is only fear and tragedy, not happiness, in Xinjiang.

Furthermore, the authors of this letter claim there is no evidence to support Pompeo’s assertion that what is going on in Xinjiang is cultural genocide.

Worth noting, however, is an internal Chinese government that claims the purpose of operations in Xinjiang is to “break their lineage, break their roots, break their connections, and break their origins.”

Executing policy with such aims is clearly meant to wipe out a people and their culture. Satellite images show the destruction of mosques, burial grounds, and other sites sacred to the Uyghur people.

Reports from scholar Adrian Zenz detail the cruel separation of Uyghur and other Muslim ethnic minority children from their families.

Vice News journalist Isobel Yeung captured video footage of Uyghur and other children held in “kindergartens” away from their parents being forced to profess their love and loyalty to China.

The Chinese government is striving to 'sinicise' Uyghurs and other Muslim ethnic minorities into nonexistence.

Nothing about these camps is in accordance with rule of law, as this letter claims. Uyghur men and women are arbitrarily detained without being charged of a crime, which violates Chinese law.

They are arrested and sent to these camps for actions considered legal under Chinese law, such as engaging in religious activities, having relatives living abroad, or even deciding to leave their homes through the back door instead of the front.

They have no access to legal counsel, no way to appeal their case, and often their families do not know their whereabouts.

Within these camps, they are not allowed to practice their faith, as they are forced to denounce their belief in God and profess their devotion to the Chinese Communist Party (CCP).

Normal religious acts, such as praying, growing a beard, using the common greeting “Assalamualaikum,” and abstaining from pork and alcohol are also forbidden, not protected. This violates the Chinese Constitution, which guarantees religious freedom to all its citizens.

The letter claims that the camps are luxurious and offer detainees excellent amenities, which is in direct conflict with eyewitness accounts.

According to survivors and escapees of these camps, detainees are held in unsanitary, inhumane conditions, where tactics such as beating, electric shock, sleep deprivation, solitary confinement, and other forms of torture are common.

Even the vocational training centre that BBC journalists were allowed to film was clearly staged. The forced acting and fear of the detainees was palpable.

The Chinese government used to deny the very existence of these camps. Now that the truth of this draconian internment system has been revealed, why should the world believe China’s new lies about its operations in Xinjiang?

Most importantly, we would like to highlight that over 400 Uyghur scholars, intellectuals, religious leaders, artists, and activists have been detained, have disappeared, or have died while in these camps.

The whereabouts of Rahile Dawut, Chimengul Awut, Senuber Tursun, Azat Sultan, and Yalqun Rozi, among countless others, are unknown since they have been detained in the camps.

I call upon the Chinese government to immediately release them so that they may be reunited with their families.

I also request the Chinese government provide information about prominent Uyghur Islamic scholar Muhammed Salih Hajim, who died in Chinese custody. His body has not been returned to his family.

I refuse to stand idly by while the Global Times, a mouthpiece of the CCP, spreads such egregious falsehoods.

The Chinese government’s atrocious record of human rights abuses has taught the us that we cannot trust them to right the wrongs within their own nation; the government will only respond to international pressure and criticism.

I implore other Muslim-majority nations to speak out for Uyghurs and other Muslim minorities who are being targeted for their religion in China.

I call upon the Chinese government to give the United Nation’s human rights czar Michelle Bachelet unrestricted access to the Xinjiang to investigate these vocational training centres.

Finally, on behalf of suffering detainees and their families, I demand that the Chinese government close these training centres, release and honour detainees’ fundamental human rights, dismantle the police state in Xinjiang, and end these crimes against humanity.

ILSHAT KOKBORE is the president of the Uyghur American Association.