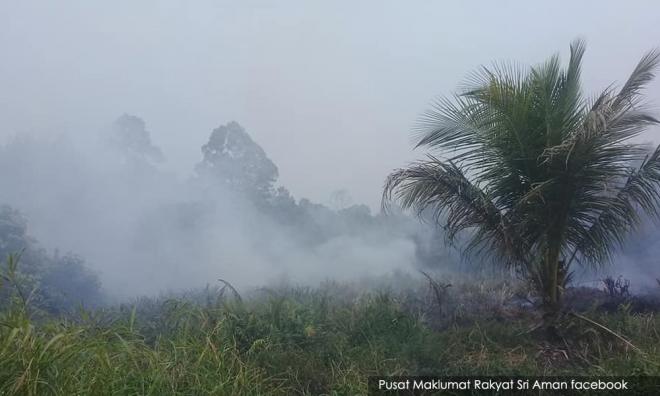 LETTER | More serious punitive measures are needed to prevent the annual recurrence of the haze as it is causing maximum danger to the people’s health and life in Malaysia, Indonesia and Singapore.

Economic activities like agriculture, aviation, tourism, fishing, construction and others are affected.

Life has almost come to a standstill as the atmosphere appears sickly. Students are unable to go to school at a time when the year-end exams are near.

Year in year out, this has become a perennial problem and the blame is placed on the farmers and plantation owners clearing forests to plant oil palm and other crops.

Oil palm, the so called golden crop and a boon for Indonesia and Malaysia, has now become the bane, and a tragedy for both nations.

It has been reported by the World Health Organisation that cancers can be caused by air pollution, and the haze is highly toxic and may also be carcinogenic.

The government has banned cigarette smoking in public areas but continue to ignore the elephant in the room, which are the more dangerous haze and vehicular exhaust emissions.

The government also needs to be truthful and transparent about the API readings whatever the situation so that the people can take the necessary precautions.

Although open burning in Malaysia has been minimal during the dry months due to strict enforcement, the smallholders in the Johan Setia area in Selangor have been a stubborn lot, very much like their Indonesian counterparts, with their open burning that thickens the smoke and haze in the Klang Valley.

The government needs to take back the land and convert it into a large industrial or housing estate with reasonable compensation in the form of houses or money to the smallholders.

There is not much agricultural produce from the peat soil in the area ,and the Selangor government will be spared of a major annual headache caused by the dense smoke and haze.

Malaysia and Singapore now know very well that the recurring haze issue cannot be settled amicably and diplomatically with Indonesia as both nations are mindful of their big neighbour.

The issue cannot be resolved at Asean-level meetings in a regional cooperative spirit either.

The only way for a swift end to the problem is to take the matter internationally, such as to the United Nations or the European Union.

The EU has shown a greater response and resolve to tackle environmental issues as was the case with the recent Amazon fires in Brazil.

The EU has placed restrictions on palm oil , short of a boycott and the present haze could bring in more punitive measures.

The powerful EU will not mind applying maximum pressure on both Indonesia and Malaysia for the forest fires that are a threat to the health and life of the people as well as animals.

The haze also contributes to global warming, which is now a sensitive and actionable issue worldwide. If no drastic measures are taken, the haze could become a permanent feature of the South East Asian skyscape endangering the health of millions of people.

The haze has enveloped three countries already and the eco-activists and environmental NGOs will need to act on behalf of the people even if the Indonesian government is unable to rein in the farmers and plantation owners.

Public interest litigation or class action should be taken against the Indonesian government and the plantation companies.

The Malaysian government should not stop the NGOs and others from taking legal action against Indonesia in any court of law.

Already there are restrictions placed by major consumers on palm oil, and if the haze and forest clearings continue, there could even be calls for an international boycott of palm oil.

It must be noted here that there are various alternatives to palm oil. Even Malaysian consumers venting their anger at the haze could boycott palm oil.

Worldwide people are now more sensitive to issues like global warming, air pollution, loss of forests and others.

Unlike natural disasters like the tsunami, volcanic eruptions, hurricanes, earthquakes and flooding which are already causing great damage worldwide, the South East Asian fires are mostly man-made and can be kept to the minimum.

It is shocking that large plantation companies that should be guided by greater managerial and corporate responsibility have joined the fray with possibly illiterate farmers in the primitive slash and burn methods. Corruption is a major cause for concern at the slack enforcement.

The air pollution index (API) in some parts of Kalimantan and Sumatra is so high that it is a serious health hazard especially to children.

It appears suicidal if not comical for the farmers there to ignite fires and immediately becomes victims of respiratory ailments – and then begin praying for the rain or seek divine intervention for relief.

The slash and burn method is an ineffective, temporary and a lazy way of agricultural cultivation.

The Indonesian government needs to instruct its farmers on modern farming methods and if necessary opt for collectivisation very much like the Felda schemes. This will reduce open burning.

There must be a moratorium on new plantations. The price of palm oil is already low, only slightly higher above production costs, and a larger supply is detrimental considering there are other alternatives and competitors to palm oil.

Recently, it was reported that an area almost the size of Singapore will be opened for oil palm cultivation in Papua New Guinea.

It looks like the voracious plantation firms are the main cause of excess supply driving down prices and hurting the smallholders.

The EU should not be blamed for reacting to this environmental catastrophe that adds to global warming.

The Malaysian government should not be harping about the difficulties faced by the smallholders when prices are down due to EU restrictions but must present the accurate and whole picture of the palm oil industry.