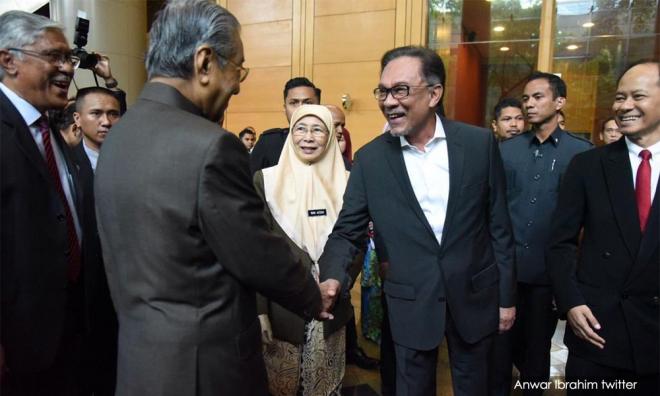 It's time for Mahathir to hand over to Anwar

LETTER | I was one of those who came forward to vouch for Dr Mahathir Mohamad when he agreed to join Pakatan Harapan just before the last general election.

In an article titled, “This eternal dance with BN has to end” (Jan 29, 2018), I wrote: “We need to give the nonagenarian a chance, and if Mahathir proves to not be genuine, then he truly is the most despicable.”

In the same article, I reiterated that we should “give Dr Mahathir a chance to prove himself to be a reformer, transformer – and Terminator”.

Over the years, I have observed Mahathir, I have found his character to be most unattractive, but I was hoping that he would change for the better, especially when he is approaching the end of his life.

Earlier in the same year, on Jan 10, 2018, when there were a lot of complaints about Mahathir, I wrote: “To me, this 92-year-old, who operates like a 29-year-old, is simply a godsend. Let us all bury the past and focus on the future. Remember the proverbial ‘No point crying over spilled milk’.”

Both articles were written before Pakatan Harapan even won the general election. In my article, I wrote: “I personally do not see why Dr Mahathir cannot be the interim prime minister until de facto opposition leader Anwar Ibrahim is released from jail in June.”

Mahathir is, therefore, the interim prime minister to both me and thousands of my fellow Malaysians. Anwar Ibrahim is the prime minister-designate, as he was the one who kickstarted the momentum for Reformasi since 1998.

However, of late Mahathir has failed to keep his word, and if he continues to insist on staying longer, beyond the two-year stint, he does not inspire me as someone with integrity.

As his critics have pointed out, the leopard will not lose its spots. On both political ends, people are riled up by his lack of sensitivity.

The question remains: Will Mahathir go down the Malaysian history as truly a despicable man, who has wrecked the country to what it is today, or will he become a true statesman? The choice is his.

By playing to the tune of narrow-minded bigots who continue to play the racial and religious cards, Mahathir will only be a hero for these people, but for the rest of us, he will be looked down upon.

Mahathir should heed our brothers and sisters in Sabah and Sarawak who have expressed their concerns over the way how PAS and Umno continue to play on race politics.

Minister of International Trade and Industry Darrel Leiking is one of the latest who has expressed his unhappiness with the things said during the Malay Dignity Congress, but Mahathir tried to play it down.

To many of us, we agree with Anwar Ibrahim that Malaysia belongs to all Malaysians. We can no longer tolerate race politics in this country. We will reject any political party that tries to use race and religion to further divide us.

Once race politics is stemmed out, Malaysians will come together again as a stronger nation. Most Chinese growing up in my generation are more than happy to have more Malay and Indian friends, as we do not see it a threat. However, with Malay politicians keeping on harping and dividing us, we are truly fed up.

It is in Anwar that we see true Reformasi, not just a matter of replacing the federal government but changing the mindset of all Malaysians. If Mahathir is smart, he will step aside to become a true statesman.