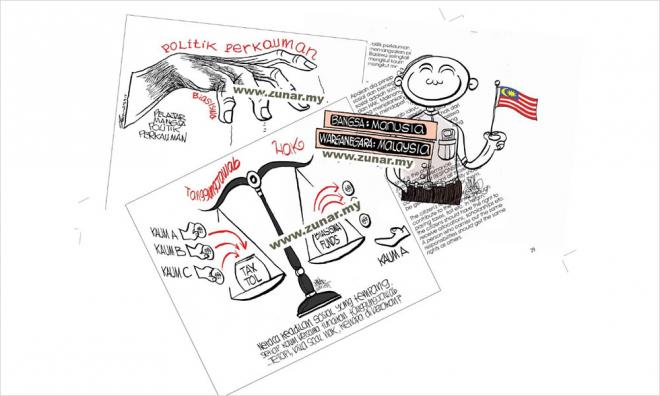 The 3Rs that are rocking Malaysia

If there is a competition of sorts, in all probability it is the 3Rs of race, religion and rasuah (corruption) that will steal the trophy for destroying Malaysia.

Racism has clearly become the number one political currency to shore up support.

Religious "wars" are being conceived by both political and religious quarters in silent partnerships to win loyalty and total submission.

Rasuah in all its myriad of shades and sizes from omission to submission to willful rent-seeking to percentage cuts to self-enrichment and profiteering in the quickest timeline, all of these are the order of the day despite bombshell court proceedings, unprecedented MACC hauls and police reports by the thousands.

We all know that when this three-pronged spear of evil - racism, religious bigotry and corruption - are constantly sharpened and capitalised upon (or even outsourced) to gain power and control, the nation will be doomed.

Malaysia, a rich and resourceful country that could have easily made its workforce of 16 million rich and well rewarded like other oil economies in the world, is instead fighting unemployment, unemployable youth and graduates as well as a growing population of vagrants and bankrupts.

A nation that had been well-conceived and which thrived on a multi-racial 'muhibah' (togetherness) formula, post-independence, is now drowning in arguments and sentiments that are reduced to sheer suspicion, jealousy and sense of threats that are both imagined and real.

If the bumiputra policy conceived from the slates of the "Malay Dilemma" was to be a rescue, it has today miserably widened the B40 population.

The restructuring of the nation's wealth and coffers through the creation of a volley of GLCs, GLICs and GLEs was to make the government resilient.

Instead, we continue to see these entities and institutions become even more opaque, leaving even the middle-income brackets fighting for financial survival and increasingly denied of economic stability.

Blaming the imminent recession is not the solution. Blaming the raiding of Malaysia by foreign entities under the authorised label of development is not the panacea.

Malaysians need to rise above the tides of power and control of politicians and self-proclaimed religious leaders and think and feel as one nation of people with respect and dignity for each other - beyond the narrow and treacherous alleys of racism, religious threats and impositions and the cancerous rasuah mindset.

Although this may be easily said, if Anwar Ibrahim can marshal the population on this path of reformation of the mind, heart and soul of Malaysians, we will succeed.

The haunting, eluding question, however, is: "Are we Malaysians ready?" And will we be able to withstand the retaliation coming from all those who are deeply rooted in wallowing in the wealth of this nation?