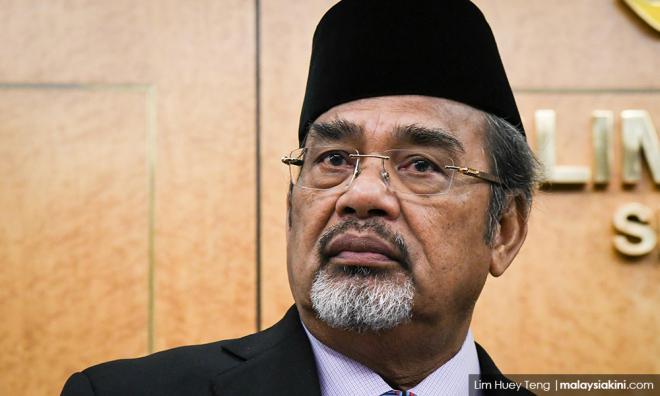 LETTER | Yesterday, Parliament passed a motion to refer Tajuddin Abdul Rahman (BN-Pasir Salak) to the Rights and Privileges Committee for his derogatory remarks against the Hindu community in Malaysia.

It was unfortunate, however, that the opposition showed no interest to debate the motion. They resorted to shouting and heckling to disrupt the proceedings.

Nevertheless, I believe that it is still important to put on record some arguments on why Tajuddin (photo, above) deserves to be referred to the Rights and Privileges Committee. Here, I would like to highlight two reasons:

(1) Maintaining the integrity of the Dewan Rakyat

The Malaysian Parliament celebrated its 60th Anniversary this week. Indeed, Parliament is a constitutional institution established under the Federal Constitution, the highest law of our land.

Article 44 of the Federal Constitution provides that Parliament shall consist of the Yang di-Pertuan Agong and two chambers, which are the Dewan Negara and Dewan Rakyat.

For the Dewan Rakyat, the members are elected through elections. As elected representatives, MPs have a responsibility to protect the interest of all Malaysians, not just those in their respective constituencies.

It is for the above reasons that the Dewan Rakyat is commonly referred to as “the Honourable House”. In other words, it is a constitutional institution which represents the peoples of Malaysia, and its sanctity should, therefore, be protected.

When Tajuddin uttered the remarks “Abu dekat dahi itu abu apa itu? Abu Chin Peng kah?” to my colleague RSN Rayer (DAP-Jelutong), he has held the Dewan Rakyat in contempt. The “abu” that Tajuddin referred to is actually known as Vibhuti, and it is an important religious practice used to honour the spirituality of a Hindu person.

Tajuddin’s statement was contemptuous of Parliament because it has insulted and belittled the religious sensitivity and practices of the Hindu community in Malaysia. Such a statement can never be tolerated, what more when uttered in the Dewan Rakyat, a constitutional institution which represents the aspirations and voice of Malaysians.

The second reason pertains to the conduct and standing order of the Dewan Rakyat. Standing Order 36(10)(c) clearly states that MPs must not use words that could promote feelings of ill-will or hostility between different communities in Malaysia.

I think everyone, including the opposition themselves, would agree that Tajuddin’s statement was clearly against the Standing Order.

Indeed, Tajuddin did withdraw his statement after MPs from Pakatan Harapan protested. However, the speaker of Parliament decided to accept the withdrawal without taking any further action. It was because of this that I strongly protested against the speaker’s decision, which eventually earned me a two-day suspension from Parliament.

As I’ve said in my earlier statement, I harbour no ill-feelings or anger against the speaker for his decision to suspend me. What is more important, however, is that the speaker was setting a bad precedent in the conduct of the Dewan Rakyat.

Does this mean that any MP can utter derogatory remarks against other races in Malaysia and get away without any consequences, just by withdrawing the remark immediately after that? Furthermore, Tajuddin had made the remark numerous times.

We should also examine the manner in which Tajuddin withdrew his statement. It is clear that Tajuddin showed absolutely no regret or remorse when doing so.

We can see from the video recordings that he was still laughing about the matter when the withdrawal was made. After the speaker suspended him for two days, he even dared to challenge the authority of the speaker by saying that two days is not enough.

For the reasons above, I believe that the motion to refer Tajuddin to the Rights and Privileges Committee has been rightly passed. We need to ensure that the Harapan government will not tolerate any form of insults against the other races in the Dewan Rakyat.

Under the Harapan government, the interest and harmony among all races will continue to be protected and strengthened.

The writer is DAP Member of Parliament for Kota Melaka.