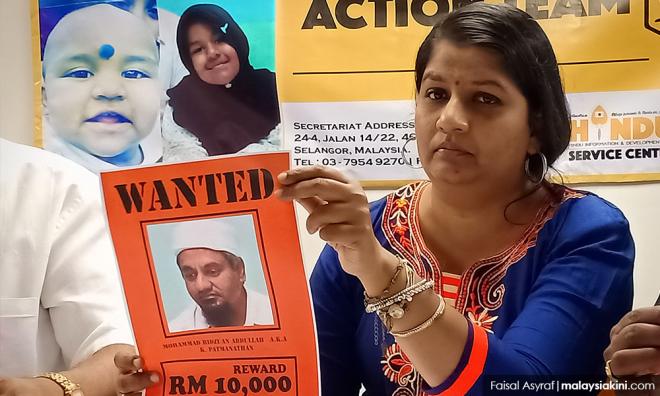 LETTER | Inspector-General of Police (IGP) Abdul Hamid Bador is reported to have said publicly that he knows where Indira Gandhi’s ex-husband, Muhamad Riduan Abdullah is, that he has urged Riduan to “come forward” and that his goal is to avoid arrest of Riduan and get a “win-win” outcome.

The IGP’s comments have drawn widespread public ire, as reported widely in the media, because it shows belligerent contempt for the Federal Court.

The two ministers have failed to meet the expectations of the public on several matters relating to the police. But, the matter of the IGP’s remarks about Riduan caps them all, because it reveals the type of policing the IGP promotes and practices.

In 1979, then chief justice Raja Azlan Shah, in a landmark decision, quoted with approval the words “Every legal power must have legal limits, otherwise there is dictatorship.”

Those words were cited in the Dec 30, 2015, Federal Court decision in which five judges unanimously upheld a May 30, 2014, decision of the Ipoh High Court (paragraph 116).

That High Court, nearly six years ago, ordered the IGP to “apprehend the defendant, Patmanathan A/L Krishnan @ Muhammad Riduan bin Abdullah for the purpose of obtaining information as to Prasana Diksa’s whereabouts” (page 121).

To date, the police have failed to fulfil that order.

The IGP’s remarks signal that he has stepped out of the legal limits imposed upon him by the Police Act, 1967, sections 3, 19 and 20. And he has explicitly chosen to disregard an order affirmed by Malaysia’s highest court.

In the words of Raja Azlan, echoed in the Federal Court five years ago, the IGP has chosen to be dictatorial.

Neither the home affairs minister nor the de facto law minister has publicly censured the IGP for his remarks. This shows that the minister responsible for the police, and the minister who is supposed to be the voice of the judiciary, condone the attitude of the IGP.

The attitude of the IGP and condonation by the two ministers shows contempt for the judiciary and for the principle of rule of law.

The proneness of the police to operate lawlessly, outside the legal limits set by the Police Act, must be curbed. This can only be achieved if ministers and the cabinet respond promptly and publicly to egregious statements made by the IGP and other senior police officers.

The Pakatan Harapan government must do what they promised during the last general election. They must remedy the rot which has been entrenched by the BN government.

In the face of such flagrant overstepping of legal limits, the cabinet must demonstrate that the government honours the rule of law and rejects dictatorial policing. This is a matter of grave national importance.

We call on the cabinet to urge IGP Abdul Hamid Bador, Home Affairs Minister Muhyiddin Yassin and de facto law minister Liew Vui Keong to resign. If the cabinet does not respond within seven days, we will be compelled to assemble at the Prime Minister’s Office to press our request.

The writer is spokesperson for Citizens Against Enforced Disappearances (Caged). The above is also endorsed by:

Eliminating Deaths and Abuse in Custody Together (Edict)