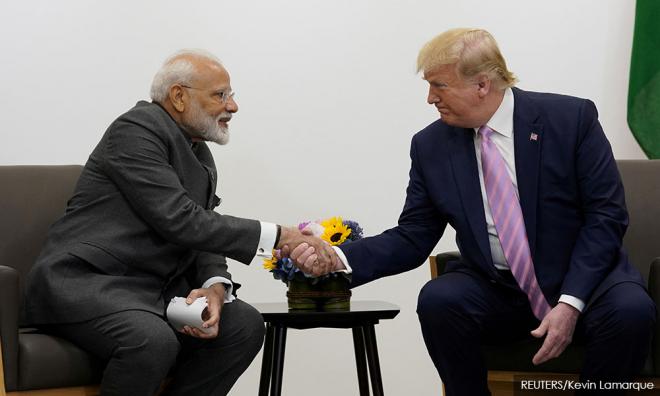 LETTER | I would like to thank professor P Ramasamy for his “detailed critique” and review of my opinion piece comparing US President Donald Trump and India Prime Minister Narendra Modi.

First, professor, my opinion piece was just that - an opinion. In it, my underlying point was that Trump is a weakling compared with Modi. Trump would love to get away with the brash unilateralism that Modi routinely exercises.

I think you might agree, given that you painstakingly took apart my editorial to build the case for Modi’s strong voter mandate, though I do not think the facts favour your attempt to discredit his open disdain for Muslims in India. Actions speak louder than words, so I maintain my opinion.

If that gels with the policy of my "political bosses", as you call them, then I am not ashamed of it in the least. It’s worth pointing out that these "political bosses" lead the administration of Malaysia's federal government and set the course and tone of the country’s foreign policy. But you are welcome to your views, whether in-line or contrarian to that of the nation’s leadership.

When I am ready to write about Palestine, Turkey, or Pakistan, I will. Indeed, I have done so extensively in the recent past. In this case, I wanted to compare and contrast Trump and Modi - as the article title stated - and I daresay I stuck to the point. If you had done the same then you would not have meandered into (somewhat) false equivalencies.

Nevertheless, I want to point out that I do not agree nor did I state that Muslim majority countries should spurn secularism in government. As Malaysians, we should have absolutely no disagreement on this point.

The fact that many Islamic countries are not secular is a matter of regret, which I have pointed out in my writings. The Arab world should look to Malaysia, in my opinion, rather than the other way around.

I have been extremely critical of absolute monarchies in the Middle East and the injustices they inflict upon their subjects. At the same time, I am also critical of autocratic tendencies of leaders who use their power to leverage one demographic over the other - whether in India, Pakistan or America.

That democracy is not unflawed is on full display these days. One thing I like about Trump is that he has revealed the underbelly of the workings of the "world’s greatest democracy" for all to see in plain view. Often it’s not pretty, but the first step towards fixing a problem is acknowledging that you have one. The American media savagely attacks Trump’s every misstep, and the opposition has every chance to loudly bemoan his misdemeanours.

Unfortunately, in India, any critical comment about Modi is pounced upon with abuse, no less by the mainstream media than in social media, which is patrolled by belligerent trolls loyal to Modi. Something you yourself did.

Yet the fact is, as I wrote, India is a secular state, and I believe that most Indians believe that it should remain so. I also believe Malaysia and the rest of the world wish it would remain so. You may believe otherwise, that’s your opinion. Please don’t disguise it as analysis.

Meanwhile, Hitler must be smiling, wherever he is!

RAIS HUSSIN is is the president/ CEO at EMIR Research, an independent think tank focused on strategic policy recommendations based on rigorous research.