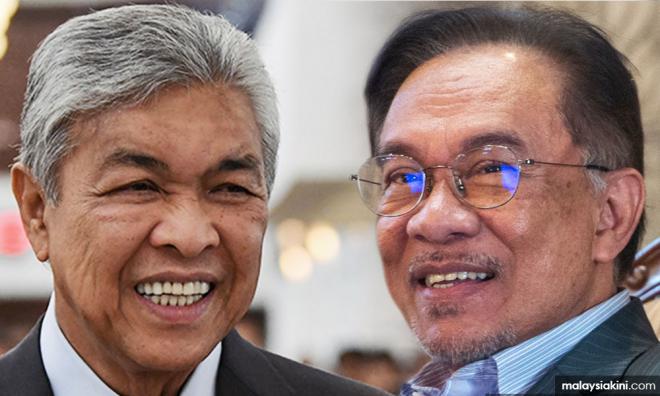 LETTER | PKR president Anwar Ibrahim has maintained that there was nothing wrong even if the viral "leaked" phone recording between two individuals was actually him and Umno president Ahmad Zahid Hamidi.

In a way, he's right in that there's no treachery, corruption and criminal offence. It was a banter between two old friends, although Zahid has denied it was him.

At this juncture, whether the four-minute clip was authentic or manufactured is no longer important because Anwar sees nothing wrong if the conversation did indeed take place between him and Zahid.

But how wrong Anwar is. For the people, it matters. It matters because it exposes his hypocrisy.

On the one hand, he denigrates Umno and blames the party for all that is wrong with the country, but on the other hand, sees nothing wrong in striking secret deals not just behind the backs of the people, but even key leaders in his own party.

Anwar has lost his moral compass because he is willing to sacrifice the ideals he supposedly cherished like transparency, fight against corruption, justice and fairness by working with a party that has a knack for trampling those.

Anwar has truly lost it. His obsession with the prime ministership which has eluded him for decades has robbed him of the political sanity that is a prerequisite to fill the coveted post.

How are we supposed to trust Anwar if he can say one thing but willing to do the complete opposite, if he has not already done so (if the audio is proven to be authentic)?

Even among thieves, there's honour, but Anwar chooses to squander whatever little trust Malaysians place on him to bring the country forward.

The main contender for the post of the ninth PM has only himself to blame and no one else by compromising on his principles, just to satiate his lust for power.

But come to think of it, Anwar has been steadfast with his principles over the years he's been in politics: it's not about cherished ideals like democracy and justice - those are just hogwash.

For Anwar, it's all about getting what he wants, whatever the price. And for that, Anwar will have to pay a heavy price.