EXCLUSIVE COMMENT A recent study, ‘Illicit Financial Flows from Developing Countries: 2000-2009’, noted that the term “illicit financial flows” rather than “illegal capital flight” has been used by governments and international organisations around the world to draw attention to how such flows worsen poverty and inequity and thwart economic development.

Such flows arise due to the cross-border transfer of money earned through corruption, criminal activities, trade mispricing, and transactions involving contraband goods as also tax evasion on legitimate income or profits.

However, economic models cannot capture outflows of illicit funds which were generated in unrecorded cash transactions such as in drug and human trafficking, sex trade, trade mispricing carried out on the same invoice through collusion among traders, and a number of other illegal activities. These limitations significantly understate estimates of illicit financial flows.

Malaysia’s climb up the income ladder that began after independence and continued through the early 1990s abruptly came to a halt in the wake of the Asian financial crisis.

Unfortunately, for a variety of reasons, the country never regained the momentum in making the transition to a high-income country. By all accounts, the brisk pace of economic growth has not ameliorated income inequality resulting from labour market segmentation, uneven access to education, and other factors.

The country’s economic growth, averaging at just 4.8 percent per annum in the decade ending 2009, has not been stellar.

At the same time, outflows of illicit capital more than tripled from US$22.2 billion (RM67.7 billion) in 2000 to US$68.2 billion (RM208 billion) in 2008, the last year for which complete macro-economic data are available. This scale of increase in illicit flows is rarely seen in Asia.

The question which naturally arises is can Malaysia afford illicit flows of this magnitude riding on the back of economic growth that looks lackluster in per capita terms? Obviously, a detailed case study on illicit flows from Malaysia is required to answer this question in depth.

For now, our estimates show that export under-invoicing transferred illicit funds from the country, while mispricing of imported goods brought in such capital. Apart from trade mispricing, the country also lost significant capital through unrecorded transfers using non-trade channels.

No matter whether illicit inflows are netted out of outflows or not, there is little doubt that Malaysia lost significant illicit capital which could have been productively utilised at home

We welcome Prime Minister Najib Razak’s call for the Bank Negara Malaysia to comment on our report and to study the issue of illicit flows from the country in more depth. Recently, the finance minister of India asked four top Indian research institutions to submit proposals to study the issue of the generation of black money in India.

Without intending to prejudge the results of the study on Malaysia, we would note that certain preliminary observations can be made.

For one, governance indicators compiled by the World Bank based on extensive surveys of the public, government officials, and the corporate sector show that over the period 1996-2009, there has been an unmistakable worsening in the control of corruption and rule of law.

Moreover, according to these indicators, overall regulatory quality in Malaysia has also deteriorated along with rising political instability. As GFI’s India study shows, a large and widening governance deficit is a powerful driver of illicit financial flows from the country. 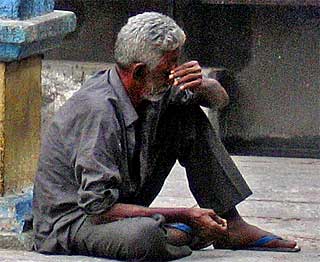 Second, Malaysia’s income distribution is highly skewed. According to the latest but dated 2004 survey data published by the World Bank, the 20 percent of the population in the lowest

By way of rough comparison, India’s poorest quintile accounted for 8.1 percent of total national income in 2005 - and India’s skewed distribution of income was found to be an important driver of illicit flows.

Another possible factor behind the growth of illicit flows may possibly be due to Malaysia’s highly open trade sector which offers more opportunities for mispricing trade, particularly if, as the World Bank surveys find, overall regulatory quality has deteriorated.

While several studies on the issue of illegal capital flight from Malaysia were carried out in the past two decades, there is a dearth of recent research on the topic.

Given the preliminary findings of our report that such flows seem to have increased recently and the fact that preliminary observations point towards certain contributory factors, the prime minister’s call on the central bank to carry out a detailed case study is timely and important.

GFI stands ready to collaborate in this effort if we were invited to do so.

DEV KAR, a former senior economist at the International Monetary Fund, is lead economist at Global Financial Integrity, a research and advocacy group in Washington DC. He is co-author of GFI’s ‘Illicit Financial Flows from Developing Countries: 2000-2009’.