The document, uploaded on Facebook, depicting the letterhead which reads: "Assistant Minister of Agriculture (Research and Marketing)" with the subject title: "Cease all government assistance - Mr Frusis Lebi from Entualang Entawa, Sri Aman".

It went on to request the Sri Aman Agriculture Department assistant director to slash "all forms of government assistance" to Frusis, who was identified as a disabled person in the letter.

"This is because he has gone against government policies and openly supported the opposition candidate in the 2011 state election," says the letter.

"Furthermore, he had set up an operation centre for the opposition."

Johnnie B Goode, who uploaded a photograph of the letter on Friday, wrote on Facebook:

"An inhumane and shameless directive from junior agriculture minister Mong Dagang from the ruling party to terminate as soon as possible the disabled persons' allowance to Mr Frusis Lebi because he openly supported the opposition."

The posting has garnered over 1,300 shares on Facebook and attracted negative reaction from netizens.

"That is not very nice of the assistant minister to treat a handicapped person like that. Charity should never involved politics," commented Sunny Ng.

The letter, dated Dec 8 last year, carries what appeared to be Mong's signature on it.

When contacted by Malaysiakini , Mong ( left ) who is Bukit Begunan state assemblyperson refused to comment on the matter.

"I will issue a statement at the right time," he said.

He also declined to confirm or deny whether the letter was from him.

In the Sarawak state election last year, Mong defeated three other candidates - PKR, SNAP and an Independent - to retain his seat. 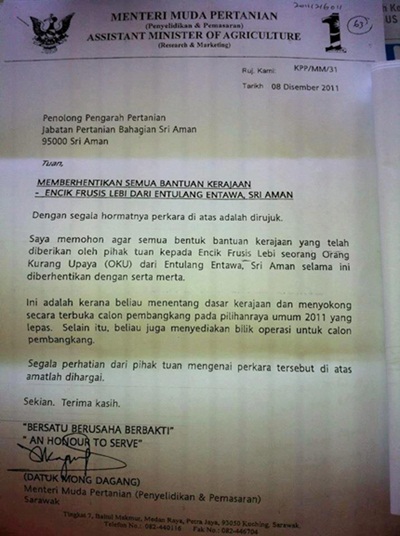