A group of retired armed forces personnel held ‘butt exercises’ in front of the residence of Bersih co-chairperson Ambiga Sreenevasan in Bukit Damansara early this morning. 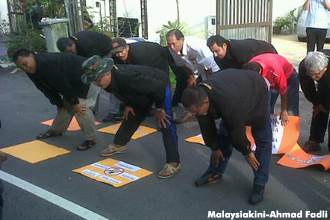 The participants, who claimed to be members of the Malaysian Armed Forces Veterans Association (PVTM), said the event was held to protest against Ambiga for being an “enemy of the nation who had smeared the country’s name”.

On May 10, a ‘burger protest’ was also held in front of Ambiga’s house by a group of traders who claimed to have suffered losses due to last month’s Bersih 3.0 rally.

Today’s ‘butt exercises’, which took place at 8.30am, is the second demonstration to be held in front of the Bersih co-chairperson’s house in a week. 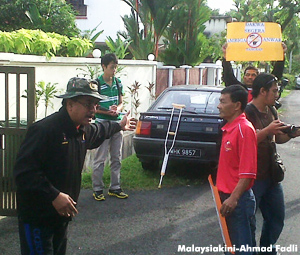 “We armed forces veterans have the right to protest against an ‘enemy’ who tried to smear the nation’s name,” said group president Mohd Ali Baharom, before the session began.

“We are giving a stern warning to Ambiga to immediately apologise to the Malaysian people regarding Bersih and free sex."

The group then marched about 20m towards the front gate of the house, which had already been opened as if awaiting their arrival.

As soon as they arrived at the house perimeter, they performed a short series of exercises, bending down and shaking their buttocks in the direction of the gate.

They also held up banners with the words ‘Reject Ambiga Anwar illegal rioters of Bersih 3.0' and ‘Reject Power-Crazy Ambiga Anwar’.

The session was led by a former Warrant Officer 1 identified only as ‘Ayah Arka’.

The group had a ‘shock’ when Ambiga emerged from her house and invited them to have canned drinks which she provided. 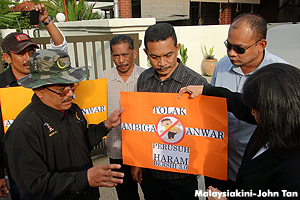 Mohd Ali refused the invitation, and subsequently handed over one of the banners they had brought to Ambiga.

“We are Malay Muslims, we drink lukewarm water. I want to give you (this manilla card), you can give it to Anwar. I want to warn you not to cause problems to the nation again.

“We will act if your smear the country’s name,” said Mohd Ali, who is also known as ‘ Ali Tinju ’ (Boxing Ali).

Commenting on the incident, Ambiga said she had often been disturbed at her house following the ‘burger protest’ incident on May 10.

According to her, there had been several persons who came to her house, asking for free burgers. 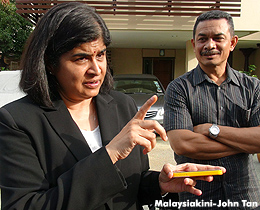 He had said that burger sellers were free to do business in front of her house.

“This is an irresponsible statement. It gives room for anyone to hold a gathering in front of anybody else’s house,” she said.

She also described this morning’s exercise session as a disturbance and not a peaceful gathering.

On May 1, PVTM, with two other NGOs - Suara Anak Muda 1Malaysia and Kelab Mahasiswa 1Malaysia - had made a police report at the Dang Wangi police station.

In it, they had urged the government to act against Ambiga and Opposition Leader Anwar Ibrahim over the Bersih 3.0 rally.

Read more from this author :
Ahmad Fadli KC
Read more like this :
#
Most Read
Most Commented
Most Recent