The Foreign Affairs Ministry is upset over an article in a major Canadian newspaper which has categorised Prime Minister Najib Abdul Razak as a 'false democrat', putting him in the same league as the world's autocrats.

The article , entitled 'A 21st-century checklist of the new autocrats' , was published on June 8 by The Globe and Mail .

It was written by its Beijing bureau chief Mark Mackinnon, an award-winning journalist who has interviewed some of the world's most controversial and prominent political leaders.

Mackinnon wrote these leaders "hold elections but have no intention of giving up power" and their "serious political rivals are jailed and their parties are outlawed on legal technicalities".

He also said that there is reason for hope in countries governed by these leaders as the "false democracies" practised by them created the possibility of change.

"Mr Milosevic and Mr Mubarak were ousted because citizens used the political space allowed them in a false democracy... The next election in Malaysia promises to be interesting."

But Mackinnon also pointed out another side of such governments.

"False democracies give the impression of being freer than they really are, which means they rarely face the kind of international pressure that the really nasty regimes get."

An officer with the Malaysian Foreign Affairs Ministry wrote a letter to the newspaper in response to the article, which was published today.

In the letter, Information and Public Diplomacy Department undersecretary Ahmad Rozian Abdul Ghani furnishes a list of reforms initiated by Najib in just three years, which he described as "an impressive track record by anyone's standards". 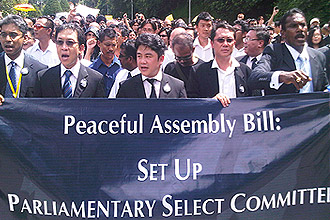 These are the abolition of Internal Security Act, ending of a 60-year state of emergency, measures to increase media freedom, amendment to the Universities and University Colleges Act, the enactment of the Peaceful Assembly Act, announcement to review the Sedition Act, repeal of the Banishment Act and the Restricted Residences Act, as well as the implementation of electoral reforms.

Ahmad Rozian also dismissed the claim that Najib holds elections but has no intention of giving up power.

"This view does not tally with the fact that the opposition won an unprecedented number of seats in the last election.

"Next time round, Malaysians will again be free to choose who they want to lead their country - and while the prime minister takes nothing for granted, he hopes he will be given a mandate to continue Malaysia's transformation," the letter states.

Anwar to Najib: Do you want to debate or not?

Najib: No place in Malaysia for LGBTs