COMMENT The occasion could not have been better chosen or timed: The eve of the country's 55th Merdeka anniversary, two hours before countdown.

The venue could not have been more appropriate: Dataran Merdeka, where the countdown to Merdeka is held every year to commemorate the very first countdown to independence in 1957. 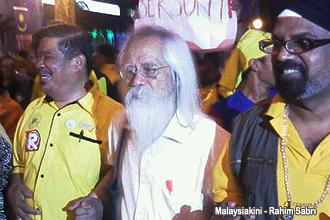 The theme could not have been more telling: ‘Janji Demokrasi', a response to the government's Merdeka theme, ‘Janji Ditepati'. Sasterawan Negara (National Laureate) A Samad Said ( centre ) to read his impassioned poem with its powerful ending:

(We cry with all our hearts: "The promise of democracy!"

until the promise itself joins in and cries out together with us!)

Home Minister Hishammuddin Hussein predicted few people would turn up. But he was wrong. They came by the thousands - some counted tens of thousands - dressed in yellow, as requested by the organisers. They came to show their disapproval of the government's hijack of this year's celebrations by imposing the theme ‘Janji Ditepati' (Promises Fulfilled), which is actually the ruling party's election campaign slogan. They came to remind the government that it had indeed not fulfilled its promises - above all, the promise of clean and fair elections.

A demonstration like this would have come in the past from the opposition, but the amazing thing about this one is that it came from the rakyat. The rakyat came to Dataran Merdeka - people of all races, dressed in yellow, in fraternity, united in a common cause.

When this comes from the rakyat, not opposition politicians, the ruling party must needs tremble.

The rakyat even defied the police ban on the gathering. Hours before the event, the police tried to frighten people away by declaring the gathering illegal . But the people didn't care. Their disregard was a clear sign that the system is falling apart. When the people don't respect the law enforcers as well as the policy-makers, the end for the latter has to be near. 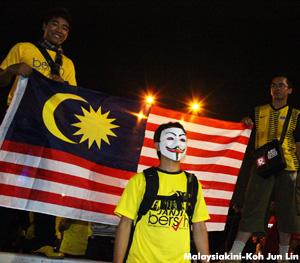 These were people who came of their own accord, braving the possibility of arrest. Very different from many of those who would be attending the official Merdeka Day celebrations the next night at the Bukit Jalil Stadium, the extravaganza organised by the government to display its might.

Of those who attended the Bukit Jalil event, ‘Himpunan Merdeka', an insider tells me, "at least 50 percent were instructed to attend. We were given RM60 for meal expenses, free travel on the LRT. Those who brought their family got an additional RM50. Free rides on chartered buses were provided."

About 100,000 people reportedly showed up, but there must have been many who were lured by the live performances of famous local artistes, the fireworks display and the lucky draw. The prizes included a Proton Prevé, a Chevrolet Cruze, air tickets to London and Sydney, motorcycles, bicycles, etc.

The comparison of the participants at the Janji Demokrasi gathering and those at Himpunan Merdeka is striking. The former were not promised any incentives. The only incentive for them was expressing their disaffection for the government, sending the ruling party the message that it cannot hijack Merdeka for its own selfish purpose: Merdeka belongs to the people, not to BN.

That they managed to do so, in defiance of the police, on such a significant national occasion must be devastating for the government.

Going by this, if BN were to retain Putrajaya at the next general election, it will not have an easy time governing for another five years. It will likely face consistent resistance from a recalcitrant rakyat. Would it be facetious then to suggest that it capitulate now? Indeed, some people have already been calling this year's Merdeka celebrations "Umno-BN's farewell bash".

However, BN's leaders continue to strive to maintain that they are right.

Prime Minister Najib Razak, in defending the use of ‘Janji Ditepati' as the Merdeka theme, says there is no reason for anyone to dispute it "unless a person is not used to keeping promises". He says everyone should fulfil their promises, including ordinary people. "If the people want the country to be peaceful, stable and more prosperous, the people must promise to contribute to peace and prosperity."

The reasoning sounds weird and warped. Mainly because the logic of putting the onus on the people to ensure peace and stability is strained and contrived. Usually, that duty is assigned to the government. But what is more telling is Najib's evasion of the all-important point - that ‘Janji Ditepati' is also BN's campaign slogan for the upcoming general election. That is the point of contention that he should have addressed.

In his speech at Himpunan Merdeka, Najib responded to the Janji Demokrasi gathering by saying that it involved only the minority whereas the gathering at Bukit Jalil involved the majority.

Again, he overlooked the key considerations.

First, many people were compelled to attend Himpunan Merdeka - among them civil servants and staff of some statutory bodies. 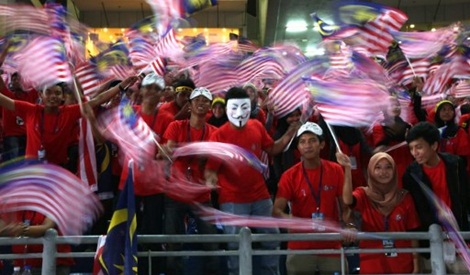 Second, many of the people of his so-called "majority" are those still zombified by the massive doses of government propaganda they are fed every day through the mainstream press and television, and have therefore not awakened to the government's chicanery.

Third, if there had been no banning of the Janji Demokrasi gathering and the threat of possible arrest, many more people might have gone for it. Plus, many who did not show up nonetheless support it in their hearts. On social media that night, many said they wished they had gone, and many more cheered the success of the turnout.

Fourth, those who did come for the Janji Demokrasi gathering were not attracted by incentives, like payments, free transport and lucky draws. Their reason for coming was sincere and genuine.

It speaks poorly of the nation's prime minister that he used the Merdeka Day celebrations to lash out at Janji Demokrasi.

Not only that, he also demonised the opposition by accusing them of trying to bring chaos to the nation. Merdeka Day is supposed to be a day of national harmony and reconciliation. Desperate though Najib may be to win the next general election, he should still have shown respect for the occasion. Instead, he hijacked the event and used it as his election platform.

How then can it not be said that the Janji Demokrasi gathering was totally justified?

He also said they would investigate Samad for reading a poem. Since when has reading a poem become an offence? Don't the police have more important things to do - like going after criminals instead? 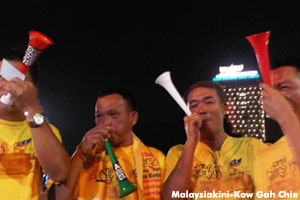 It's time the police realised that people power is on the rise and adjusted to the new paradigm - or they will look stupid playing their outdated games. It does not do them well to take their cue from their boss at the Home Ministry, Hishammuddin Hussein, who in commending them for maintaining security at the Janji Demokrasi gathering said: "We see that the event, which was aimed at creating chaos, failed ..."

His statement was outright unfair - and downright stupid. He also sounded like a sore loser. But then, if you have seen how gamblers behave when their chips are down, you will understand why he said it.

KEE THUAN CHYE is the author of the bestselling book ‘No More Bullshit, Please, We're All Malaysians', available at major bookstores.