EXCLUSIVE Permodalan Nasional Bhd (PNB) has confirmed that the height of its iconic Warisan Merdeka project has been revised to 600 metres, which will make it possibly the third highest building in the world.

However, the government-linked fund management company has denied speculation that the tower will be pushed up to 120 floors.

“At the inception of this project, the original height of the building was envisaged to be approximately 509 metres. 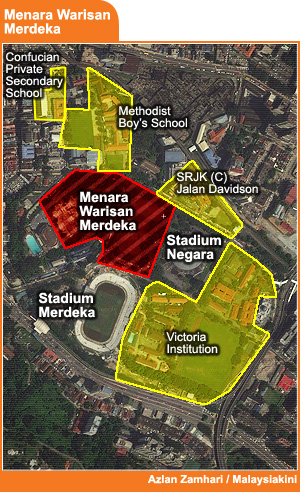 “Since then, we have revised the height to 600 metres and the extra height is purely for the spire,” a PNB spokesperson said in response to Malaysiakini ’s inquiry.

The company also clarified that the nett lettable area for Menara Warisan would remain at 100 floors.

“Therefore, the new height of 600 metres will not increase the nett lettable area for the tower as conceptualised earlier.”

The spokesperson was responding to a claim made by heritage activitist Teoh Chee Keong that the height of Menara Warisan will be increased from 102 floors to 120 floors.

At 600 metres, Menara Warisan will possibly be the third highest building in the world, only lower than UAE’s Burj Khalifa (828 metres) and just one metre below Saudi Arabia’s Royal Clock Tower Hotel (601 metres).

It will however surpass the 509-metre Taipei 101, which is currently the third highest skyscraper and was the world’s highest between 2004 and 2010.

However, Menara Warisan is facing fierce competition for height from projects in fellow Asian countries, with several skyscrapers of more than 600 metres under construction or being planned in China and India.

‘No heritage buildings will be acquired’

PNB also denied that the company would acquire heritage buildings in its surroundings to expand the roads connecting to Menara Warisan.

“For road improvement purposes, there are road widening plans for the existing roads. However, this will be carried out within the road reserves and using part of Menara Warisan’s land,” the company said. 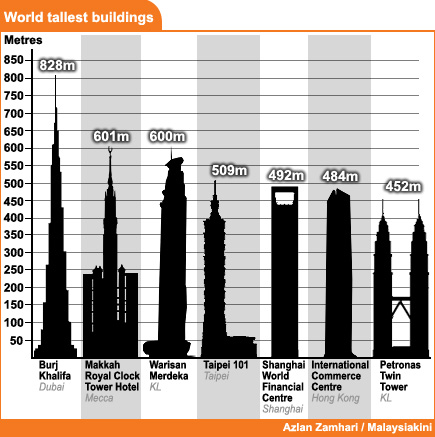 PNB also said that although the development order has been granted, it was still fine-tuning certain aspects of the project prior to execution of work.

“This is to ensure that the project will be a beneficial one, not only for us but also for the communities surrounding the development.”

During a forum held in Kuala Lumpur earlier this month, Teoh, who is also a lecturer, said he had heard that Menara Warisan would be increased from the initially planned 102 floors to 120 floors.

This will effectively raise its height to around 600 metres.

teoh also expressed concern that the revision in height would trigger another round of land acquisitions in the surrounding area to accommodate the expansion of the road system in the vicinity.

This could affect the surrounding heritage buildings, including the Chan Clan House and the Kuala Lumpur-Selangor Chinese assembly Hall, he said.

The 100-storey Warisan Merdeka, with an estimated cost of RM5 billion, was announced by Prime Minister and Finance Minister Najib Abdul Razak in his Budget speech in 2010.

The announcement sparked strong protests among netizens and the opposition, claiming that the building was a typical example of the federal government’s spendthrift ways and the RM5 billion cost would be better spent on welfare, education and to improve the public transport system.

Najib has stoutly defended the project, stressing that it was not a waste and that it would have a multiplier effect on the economy.