COMMENT The attacks against Malaysiakini signal that the government is getting desperate.

For the past week, the mainstream media - TV3 , Utusan Malaysia, New Straits Times and The Star - have launched an attack on Malaysiakini and civil society organisations for receiving grants from international foundations in what they claimed is a plot to destabilise the government. 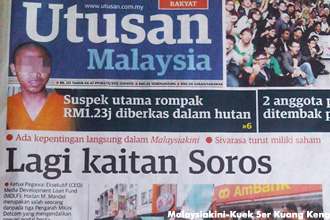 Malaysiakini has been further attacked for having a foreign investor which is allegedly linked to billionaire financier George Soros. Further aspersions have been cast on Malaysiakini that some of our shareholders have political links.

I understand the reason for the attacks. After all, elections are around the corner, and by all accounts, the results could go either way.

Hence, the mainstream media have been ordered by their political owners - Umno and MCA - to attack and discredit voices that are calling for free and fair elections, for investigations into various corruption scandals and for democratic principles to be observed and upheld.

It is no surprise that they repeatedly report accusations, insinuations and half-truths, along with an ugly dose of racism - a strategy perfected by none other than Nazi propaganda chief Joseph Goebbels .

Let’s look into these accusations one by one and put them to bed:

Former Malaysiakini news editor YL Chong’s repeated accusations that in 2001 we hid a RM188,000 grant from Media Development Loan Fund (MDLF) and that he resigned after taking a stand on the matter.

This accusation is not new. It was paraded in the mainstream media 11 years ago - back in 2001 - as “proof” of our links to Soros. We have published our rebuttal shortly after those accusations were made.

In a nutshell, Malaysiakini was open with its staff about a contract to build a software application for the Centre for Advanced Media Prague (Camp), which is MDLF’s technology division.

Chong went to the media with the accusation that the deal was a grant and we’re hiding the deal. In fact, Malaysiakini had already made an announcement of the software deal on the site.

The question is, why would Malaysiakini be so open with its staff on the deal. Wouldn’t it have made more sense to keep Malaysiakini staff in the dark?

2. ‘Soros man on Malaysiakini board’

On the back of successfully completing the technology development and successfully launching a subscription model in January 2002, MDLF decided to invest in Malaysiakini - their first in an online medium, breaking away from their traditional investment in newspapers, television and radio stations.

Malaysiakini received RM1.3 million for 29 percent of equity and MDLF agreed to sign an editorial non-intervention agreement. Following that, Malaysiakini held a press conference and made an announcement about the matter.

At the time of the investment, MDLF was led by its co-founder Sasa Vucinic, a journalist whose independent radio station B92 in Belgrade fought a long and hard battle to help bring down Serbian president Slobodan Milosevic . Milosevic was subsequently charged with war crimes and crimes against humanity in connection with wars in Bosnia, Croatia and Kosovo.

Sasa went on to set up MDLF with the strategy of helping independent media in Eastern Europe grow following the fall of communism. Soros, a Hungarian with a track record of supporting press freedom, was among the many major donors of MDLF.

To date, MDLF is involved in 269 projects for 85 independent media companies in 27 countries. Not only does MDLF have a right to be on Malaysiakini ’s board given its stake in the company, it is hardly business sense for us to pass on the opportunity to have such distinguished individuals to serve on our board.

The advice and guidance from MDLF and their current CEO, Harlan Mandel, have been a tremendous boost to Malaysiakini ’s business strategy.

How is Mandel a Soros’ man? Indeed, using the tenuous link between MDLF and Soros to argue that somehow MDLF is doing Soros’s bidding is definitely straight out of the Goebbels handbook.

3. But why attack Soros?

The entire attack by the mainstream media is premised on a link between Malaysiakini and Soros. But why the hatred of Soros?

The Malaysian central bank chose to gamble our hard-earned reserves on defending the pound. When the pound collapsed in 1992, Malaysia was left with a major hole in the Treasury, and Soros made a name for himself for breaking the Bank of England.

Instead of asking why was our central bank engaged in highly speculative and risky action, Malaysia attacked Soros. 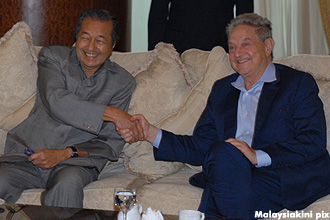 Despite a heated exchange of words in the wake of the Asian financial crisis, former PM Dr Mahathir Mohamad later conceded that Soros was not responsible for the damage to Malaysia. Mahathir subsequently met Soros in Kuala Lumpur and asked for his support for his global campaign to outlaw war.

During his visit to Malaysia, Soros met with a host of government and business leaders.

We have even heard of there were subsequent private meetings between Soros and top Umno leaders, which to date have gone unreported but will come to light soon.

4. Malaysiakini gets grants from foreign donors

Malaysiakini funds its core activities from subscription and advertising revenues. Grants are used to fund projects that are of social benefit but are not likely to be revenue generating or profitable.

So while Malaysiakini as a whole is a for-profit organisation, we do solicit funds to support our “non-profit” projects.

Malaysiakini built Undi.info to provide electoral information and Digitalibrary.my as an online archive of important documents.

5. Malaysiakini has opposition figures as shareholders

In order to start up Malaysiakini , the founders invested their own funds and appealed to friends in civil society for investment in 1999. 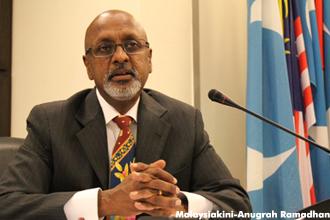 R Sivarasa ( left ), then a prominent human rights activist had yet to join any political party; Sivarasa’s sister-in-law, Mary Agnes, who is a banker; Bruno Pereira, a prominent trade unionist; and Joseph Paul, also a human rights activist; took the risk to make the initial investment in Malaysiakini . Their contribution was converted to shares and they represent not more than a couple of percent of the company.

Up to this date, unfortunately, they and other shareholders have not received any dividends but we hope their investments have been worthwhile. In no way do any of the shareholders have an influence in Malaysiakini .

The Selangor MB’s press secretary, Arfa'eza Aziz, is a former Malaysiakini journalist, a fact conveniently omitted by The Star ’s report . She, along with 50 other Malaysiakini staff, hold shares amounting to about 12 percent of the company.

6. Malaysiakini is controlled by outside forces

Nothing can be further from the truth. Despite many offers to buy Malaysiakini , the founders continue to hold on to their majority stake.

Malaysiakini asks our readers to pay a subscription fee so that Malaysiakini remains financially independent and does not have to seek funding for its core operations. Who would know best about how editorial decisions are made but our editors and journalists?

Over 13 years, hundreds have worked on our editorial floor. If asked, I believe they will tell a tale of hard work and long hours, but never a tale of stories being spiked, censored or twisted to suite external powers, something so prevalent in the newsrooms of politically-owned media.

Editorial decisions rest with the editorial desk and the editor-in-chief, and that is the way it should be.

We do not believe the accusations against Malaysiakini will stop. After all, desperate times require desperate measures. Nevertheless, for those who are really interested to know more about Malaysiakini , we are more than happy to talk to them.

Besides that, we need to get on with our job of reporting the news that matters, without fear or favour.

'Mahathir keeps shooting his own foot'