It is a four-hour journey by 4WD from Sarawak's gas and timber capital of Bintulu if one wants to head for the tropical rainforest of Murum in the interior of the Kapit division.

To spur development in Murum, the Sarawak government has approved logging licences, permitted palm oil plantations and is also building the Murum hydroelectric dam at a cost of RM3 billion. 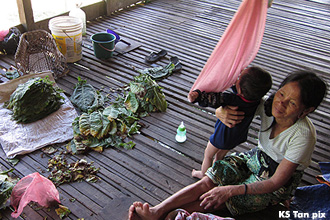 Forced to move out for logging and the dam project, they have blockaded the road leading to the dam construction site.

A team of Malaysiakini reporters visited Murum recently and interviewed some of the Penan.

One of them, Senang Kalang, 27, said the Penan have vowed to defend their homes and customary land.

"We were never afraid. It is nobler to die for the truth than to live like this," Senang said.

He said the Sarawak government never consulted the natives about developing the area, and they were only approached by the developers long after the construction of the dam had started. 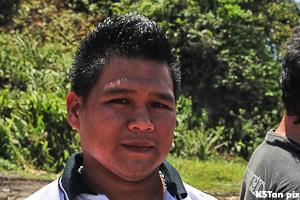 "They asked us before whether we agreed (with the dam project). We said that we didn't," said Senang ( left ), who has camped at the blockade site since Sept 25.

The developer, Sarawak Energy Bhd, had earlier signed an agreement acknowledging the Penan as the customary owners of the land in the area and agreed to pay compensation for ground-breaking for the dam and for intrusion into their land.

However, the state government turned down the other demands of the Penan, which included compensation of RM500,000 for each family for the loss of their customary land.

Their other demands were 30,000 hectares of land for every village, 25 hectares for every farming family, education for their children, a community development fund and rights to their land that is not submerged by the dam waters.

The problem has been worsened by the citizenship woes of the natives. According to the Hydroelectric Dam Project Social and Environmental Impact Assessment Report, only 60 percent of the Penan have birth certificates. 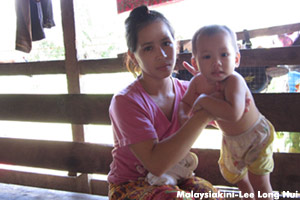 In addition, 80 percent of the same population do not have MyKad.

The report also states that 41 percent of those without MyKad had applied for this in 2009, but to no avail.

Senang said officers from the National Registration Department (NRD) visited the Long Luar longhouse where he lives and the residents put in their MyKad applications.

"They came to our longhouse to get our applications, but the MyKad are still not ready. They keep giving all kinds of excuses for this.

Malaysiakini 's checks also showed that the birth certificates of most of the Penan children state hat their citizenship "is yet to be determined". 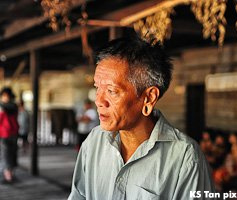 According to Long Jaik longhouse chief Matu Tugang ( right ), the problem arose because many of their parents were also not recognised as citizens.

This makes it impossible for them to register for schooling, Matu said.

"We really want our children to go to school," he said, saddened by the absence of schools in the vicinity of his longhouse.

Senang, who is a little better off because he has his MyKad, is remorseful of the way the government treats the native peoples of Sarawak.

"We used to support the government but now we don't know who to choose.

Part 2: Life's a chicken coop for Penan with kids in school

Part 3: The gov't has rejected us, say Murum natives