EXCLUSIVE Businessperson Deepak Jaikishan claimed that he paid the family of Najib Abdul Razak an undisclosed sum for the premier's intervention to allow him to come in as a party in a Defence Ministry project deal.

According to Deepak, he stitched a deal with a Selangor Umno leader's company where he would participate as a third party in the proposed project. 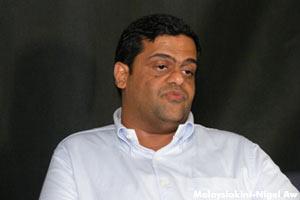 This began, Deepak explained, with a privatisation agreement in 2005 where the company was tasked to work on a Defence Ministry project in Putrajaya.

In exchange for the estimated RM100 million project, which the company was to build at its own cost, the company would be paid RM20 million by the government and would acquire 223.3 acres of government land in Klang.

However, Deepak said the politician did not have the credit-worthiness at that time to secure a land bond of RM72.5 million necessary for the project and had therefore approached him for help.

The deal, he added, would require him to secure the RM72.5 million land bond and top it up with RM23 million in cash payments to the company.

In return, Deepak said the politician's company was to give him ownership of the said property, which is a piece of prime land adjacent to the now booming Setia Alam township. 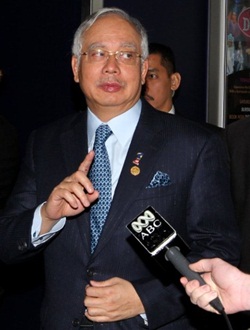 The names of the politician and the company involved have been withheld pending their reply to Malaysiakini 's request for comments.

"She couldn't get the government to agree that the land bond be issued to a third party because under privatisation, the company that gets the privatisation (project), the land must remain under their name.

"So, I organised a meeting for her to meet (Najib), at that time our defence minister, to allow this land be transferred to a third party company," he said.

Deepak said the transfer was made possible after he "contributed heavily" to Najib's family.

Below is the excerpt of Malaysiakini ’s interview with Deepak:

Malaysiakini: You mentioned earlier that there were bribes involved in this project?

Deepak: Okay, I think as far as the dealings with the politician were concerned, it was a business deal. But yes, as I mentioned - I wouldn't use that word that you used just now - but we had to contribute heavily to ensure that we get the approval from the defence minister at that time.

A close family of his (Najib) lah. I will elaborate at later sessions.

We couldn't procure the land to be given to a third party otherwise.

Can you disclose how much?

Not (at) this session.

Was a substantial amount of money involved?

How big is the amount?

Maybe we go to the next question.

For clarity, this "contribution" is with regard to the meeting that you mentioned just now, set up between the politician and the then defence minister?

The contribution is in terms of money and not material?

Deepak noted that "a third-party scenario should not happen in normal circumstances", but was only made possible with Najib's help.

He claimed that he possessed the minutes of the meeting in which Najib expressed "no opposition" in approving the third-party land transfer.

The revelation comes following a land dispute in which Deepak's company had not received the promised land from the politician, despite, he said, having kept up his end of the bargain.

"He (Najib) is well aware (of this dispute) but I don't see any action coming out. I don't see him carrying the responsibility of solving this matter," he said.

Deepak has filed a legal suit in the Kuala Lumpur High Court and a police report on the matter was lodged in July.

Deepak ousted after revolt over his media interviews