EXCLUSIVE Top Malaysian politicians, their family members and well-heeled associates are among those owning secretive offshore companies in Singapore and the British Virgin Islands, according to an explosive cache of leaked documents.

The files, which were obtained by Washington-based International Confederation of Investigative Journalists (ICIJ) and examined by Malaysiakini , show more than 1,500 Malaysians owning offshore companies in Singapore - dubbed as the new Switzerland - as well as the British Virgin Islands (BVI), an international tax haven. 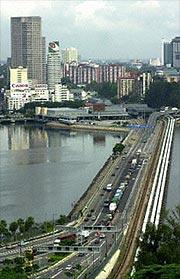 While some of the offshore companies carry out legitimate transactions, others are likely to be part of the RM871.4 billion estimated by Washington-based financial watchdog Global Financial Integrity (GFI) to have been lost through illicit outflows over a 10-year period.

In 2010 alone, GFI reported that close to RM200 billion of dirty money was siphoned out of Malaysia, putting the country second only to Asian economic powerhouse China in global capital flight.

The leaked ICIJ files provide secret records of offshore holdings of people and companies in more than 170 countries and territories.

"The hoard of documents represents the biggest stockpile of inside information about the offshore system ever obtained by a media organisation. The total size of the files, measured in gigabytes, is more than 160 times larger than the leak of US State Department documents by Wikileaks in 2010," says ICIJ.

However, despite the extensive data, this is not the complete list of all off-shore companies around the world. Indeed, it is only the tip of the iceberg.

Nevertheless, it allows members of the public, for the very first time, to sneak a peak into the secretive world of anonymous wealth.

According to the leaked documents, Raja Nong Chik, who is Lembah Pantai Umno chief, is a prominent shareholder and director of RZA International Corporation, a British Virgin Islands entity incorporated on Aug 21, 2007, through Singapore.

The company is a mirror of Malaysian entity Kumpulan RZA Sdn Bhd, a 1979-founded company dealing in real estate and equities investment. 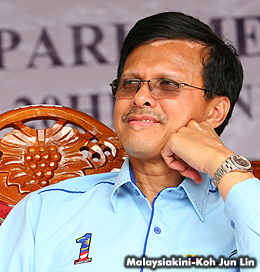 Raja Nong Chik set up the offshore entity with his father, Raja Zainal Abidin Raja Tachik, a number of his sisters and brothers as well as other family members. Most of them are also shareholders and directors of Kumpulan RZA Sdn Bhd.

Prior to his senatorship, Raja Nong Chik was a corporate figure who founded and managed an engineering firm for 20 years.

Contacted by Malaysiakini , the minister confirmed that RZA International was set up by his father, who will turn 96 this year, "for the purpose of holding legitimate offshore investments for the family".

However, the minister did not elaborate on the offshore investments made by his family through the company. He added that RZA International was de-registered in 2009.

"The company was not used to obscure activities of Kumpulan RZA Sdn Bhd, and neither was it used to circumvent taxes or hide transactions overseas," Raja Nong Chik said in an email to Malaysiakini .

Mirzan Mahathir, the eldest son of Mahathir, is also among those the ICIJ list as director and shareholder of three off-shore companies.

Mirzan's major commercial vehicle in Malaysia is Crescent Capital Sdn Bhd, an investment holding and independent strategic and financial advisory firm. He is the company's chairperson and chief executive officer. 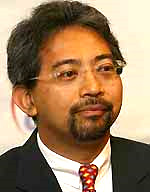 A Forbes-listed entrepreneur, Mirzan holds a non-executive director position in Philippines-based San Miguel group, which has raised eyebrows in Muslim-majority Malaysia, as beer brewery is a core businesses of San Miguel.

One of Mirzan's offshore entities is called Crescent Energy Ltd, a Labuan offshore company incorporated on Dec 16, 2003, originally named Mainline Ltd and with an authorised share capital of US$12,000 (RM37,000).

Mirzan became a director and main shareholder six days later and the company was renamed Crescent Energy on May 16, 2008.

Another Labuan offshore company, Utara Capital Ltd, in which Mirzan is named as sole shareholder and director, was incorporated on Aug 19, 1997, with an authorised share capital of US$15,000.

The third company, Al Sadd Investments Pte Ltd. was also a Labuan offshore company. It was established on May 14, 2009, with an authorised share capital of US$12,000. Mirzan is listed as the sole shareholder and director of Al Sadd Investments.

Malaysiakini has approached Mirzan's office for his comments on these offshore companies, but his aide said he was unable to respond on the matter as he was out of town.

Another prominent personality on the list is Chia Tien Foh, who is better known as Michael Chia - the shadowy business tycoon allegedly linked to Sabah Chief Minister Musa Aman.

Chia, too, has three offshore companies in which he is listed as either as director or shareholder. One of them was CTF International Ltd , with ‘CTF' seen as the initials of Chia's full name. It was incorporated on April 18, 2006, in the British Virgin Islands.

CTF International gained notoriety when it was named by whistleblower website Sarawak Report of being a conduit in channelling millions of ringgit to a Hong Kong account allegedly linked to Musa. 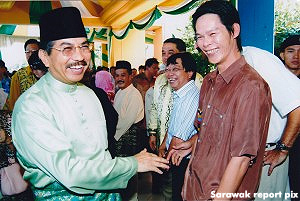 However, Musa ( left ), has denied any business ties with Chia ( right ).

CTF was de-registered in 2008. The other two offshore companies owned by Chia are Ravenswood Development Ltd and Ark Capital Technologies Ltd.

In addition, Chia's wife Yap Loo Mien and another woman, who is alleged to be his mistress, Yap Siaw Lin, also appear on the list as key shareholders in three separate British Virgin Islands entities.

Malaysiakini contacted Chia through the address stated in his company registration documents for comments, but there has been no response.

According to a former officer with of the Inland Revenue Board (IRB), crooked Malaysians parked their money offshore to enjoy either significantly lower or even no taxes, and where the income is illegal, they are protected by a wall of secrecy.

Such ploys, said the officer who was a tax investigator, may not always succeed as Malaysia has a double taxation agreement, with close to 80 countries, that provides for the exchange of information on investigations involving the prevention or detection of tax evasion or fraud. 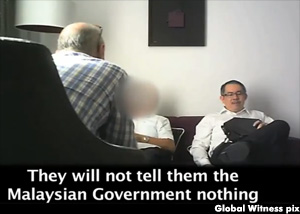 This includes Singapore, where some of the offshore companies are based.

The island republic has been labelled by Sarawak corporate lawyer Alvin Chong ( right ) as the "new Switzerland" in a recent video clandestinely filmed by London-based NGO Global Witness.

The retired officer, who worked with the IRB for more than 20 years, added that while the setting up of offshore companies was, in itself not illegal, such companies could be used to evade taxes.

"For example, a payment can be made for a seemingly legitimate service, like consultancy for the procurement of submarines, but it is paid to a company set up overseas, where the recipient pays a lower tax.

"Singapore and Hong Kong, with corporate tax rates of about 17 percent compared with Malaysia's 25 percent, are popular parking lots," he said, speaking on condition he not be named.

One of the methods of tax evasion was explained by Chong in the Global Witness video - on how to avoid paying capital gains tax on Sarawak's doggy land deals.

According to the former tax officer, offshore companies often include many layers of ownership through nominees to camouflage and "water down the link" to the original owner. 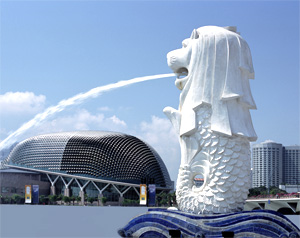 As such, he said, the act of setting up offshore companies in tax havens often raised red flags.

"Someone can say that their company is set up in the British Virgin Islands, for example, but the money they use to set up the BVI company, or more importantly, the operations channelled through these tax havens could raise suspicion as being not genuine and invite an IRB probe," he said.

"If the MACC (Malaysian Anti-Corruption Commission), IRB or the police want information from their Singapore counterparts, for example, the Singaporeans are obliged to give, at least under the Malaysia-Singapore DTA (double taxation agreement)," he said.

But most tax havens are not signatories to DTA agreements and they operate outside international laws.

Moreover, it is also up to the Malaysian authorities to decide whether to pursue the case and seek the necessary information from their counterparts abroad.

Secrecy for sale: Inside the global offshore money maze

How the nominee trick works