Washington-based financial watchdog Global Financial Integrity (GFI), in its latest report which tracks capital flight, says the level of illicit flows from Malaysia in 2010 was the highest in 10 years.

GFI has introduced a new and more conservative methodology in its estimates of illicit financial outflows, which help to zero in exclusively on dirty money. As such, estimates from its previous reports have been revised.

GFI has yet to obtain data for 2011 and 2012, but these will be included in future reports.

The global financial watchdog has warned that capital flight in Malaysia is "at a scale seen in few Asian countries".

The GFI report, ‘Illicit Financial Flows From Developing Countries: 2001-2010', is co-authored by GFI economists Sarah Freitas and Dev Kar, who is a former senior economist at the International Monetary Fund.

According to GFI, for the cumulative illicit financial outflows over 10 years - from 2001 to 2010 - Malaysia is ranked No 3 in the world, after China and Mexico.

Nevertheless, GFI data was backed by a different study earlier this year by another organisation - the London-based Tax Justice Network, which found Malaysia among the top countries when it comes to capital flight.

Graft accounts for 20% of dirty money

GFI said that trade mispricing - the practice of shifting profits overseas by over- or under-invoicing intra-company transactions - accounts for an average of 80.1 percent of illicit financial flows from developing countries.

The rest of the dirty money involves corruption.

"Illicit transfers of the proceeds of corruption, bribery, theft, and kickbacks, accounting on average for 19.9 percent of illicit outflows over the decade, are on the rise as a percentage of total illicit financial outflows," said GFI.

GFI described its estimates of global dirty money as "extremely conservative" as they do not include trade mispricing in services, same-invoice trade mispricing, hawala transactions, and dealings conducted in bulk cash.

"This means that much of the proceeds of drug trafficking, human smuggling, and other criminal activities, which are often settled in cash, are not included in these estimates," said Kar ( right ).

Asia is the biggest losers of capital, says the GFI report.

"We found that Asia, accounting for 61.2 percent of cumulative outflows, was still the main driver of such flows from developing countries.

"Indeed, five of the 10 countries with the largest illicit outflows - China, Malaysia, the Philippines, India, and Indonesia - are in Asia."

GFI said increasing transparency in the global financial system is critical to stemming the outflow of illicit money from developing countries. 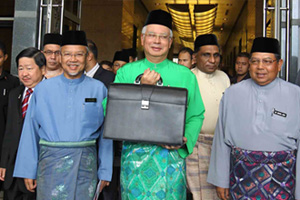 Following the release of the previous GFI report in January last year, Najib, who is also the finance minister, kicked the ball to Bank Negara's court, saying that it would provide an explanation on the findings.

But to date, Bank Negara has yet to announce the result of its investigations or explain the massive illicit capital flight, despite offers of help from top GFI economists.