Also present at the event - dubbed a ‘special meeting’ with Muhyiddin - was caretaker Health Minister Liow Tiong Lai, despite it being touted as an Education Ministry event. 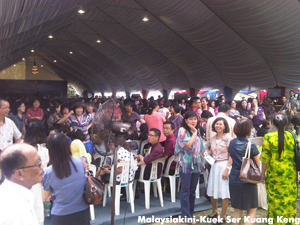 BN leaders had previously claimed that the meeting had been arranged long before the dissolution of Parliament on April 3.

Despite this, the two caretaker ministers fully capitalised on the event to woo the educators as voters for the ruling coalition.

Those present were seated in a huge covered area that was stuffy. This was made worse by the heat from the blazing afternoon sun.

The Education Ministry had  instructed more than 6,000 headmasters and teachers from all over the country to attend the meeting at SRJK(C) Foon Yew (1).

The speeches were followed by a ceremony at which mock cheques for a total of RM14.3 million, said to be part of the RM100 million education allocation that caretaker Prime Minister Najib Abdul Razak announced for Chinese schools, were handed out to Chinese schools in Johor. 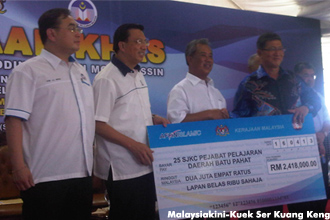 Liow delivered part of his speech in Mandarin, lambasting PKR de facto leader Anwar Ibrahim for victimising Chinese schools in 1987 when he was education minister.

He said that, apart from rejecting the community's demand to abolish Section 21(2) of the Education Act 1961 that allows the education minister to close Chinese schools, Anwar had directed all state education departments to allocate land reserved for schools to national schools only.

Anwar had also deployed Chinese teachers who do not understand Mandarin to senior management positions in Chinese schools, Liow claimed.

The protest movement, Liow said, led to the notorious Operasi Lalang of 1987, under which 108 politicians and activists were detained under the Internal Security Act 1960.

In contrast, Najib abolished the controversial section in 1996 and Chinese education was recognised under the new Education Act 1996, when Najib was the education minister, Liow stressed. 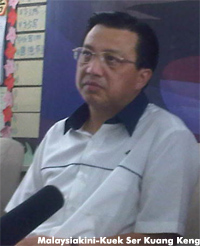 "What Anwar failed to do, Najib completed in 1996, which was a turning point for Chinese education in Malaysia," he said.

Liow ( right ) therefore called on all teachers to give Najib their full support, so that he could implement progressive and open policies.

He also praised Muhyiddin and his deputy, Wee Ka Siong, who was also present at the event, for their strong support for vernacular education streams.

Muhyiddin has solved "almost all their problems", including shortage of teachers and funds, as well as relocation of schools, Liow said.

Muhyiddin, who took the stage after Liow, pledged that Chinese education will continue to be safeguarded as long as BN rules the country, and vernacular education has been included as part of the national education system in the National Education Blueprint introduced last September.

However, the blueprint has been severely criticised by prominent Chinese education group Dong Zong for marginalising Chinese schools.

"We accept the existence of Chinese schools as a reality. We give priority to national schools, that's true... but we also accept the fact that Chinese schools have long been here and Chinese community is a community that emphasises its language and culture... we practice acceptance of difference," he elaborated. 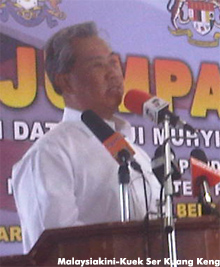 The Umno leader, often labelled by his critics as conservative and racist, denied he is “anti-Chinese”.

"Some say I'm anti-Chinese but those who know me do not think so. I always meet with people of all races while I was Johor menteri besar, just that I don't have a Chinese girlfriend," he joked.

Before ending his speech, Muhyiddin ( left ) minced no word in garnering electoral support for BN.

"I'm not campaigning but if we know the policies are good, the economy is good, the education system is steadfast, then I think it is easy when the general election comes, we only have one choice, that is to choose the BN government."

Lukewarm response from the crowd

The response from the crowd - many of whom were fanning themselves with books or papers due to the stuffy venue - was lukewarm until the emcee urged them to shout slogans and stand up to sing the 1Malaysia song and waive the national flag.

After the event, a teacher who had drove for an hour from Pontian, complained that the event was a waste of time and resources.

"Today's event is a waste of public resources. Thousands of teachers came all the way here. Some of them have to leave their pupils and work just to listen to VIPs making empty speeches. 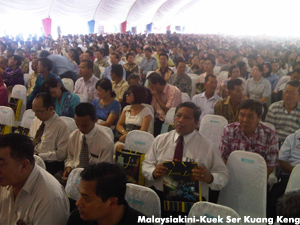 "Public fund was abused and teachers became puppets who were forced to attend the event. Pupils' interest had to make way for political interest.

“But if we refuse to attend, we have to write in letter to explain or else action would be taken against us. Please don't make us teachers to become fools," said the teacher on the condition of anonymity.

Another teacher from the Johor Baru area told Malaysiakini that it was clearly a campaign activity to “buy” Chinese voters.

"In fact, the education problem of minority ethnic groups cannot be solved by the allocation. BN must abolish the unfair Section 17(1) of the Education Act to show that it is indeed transforming itself, but this is impossible as racism is the basis of BN," said the teacher, who also requested anonymity.